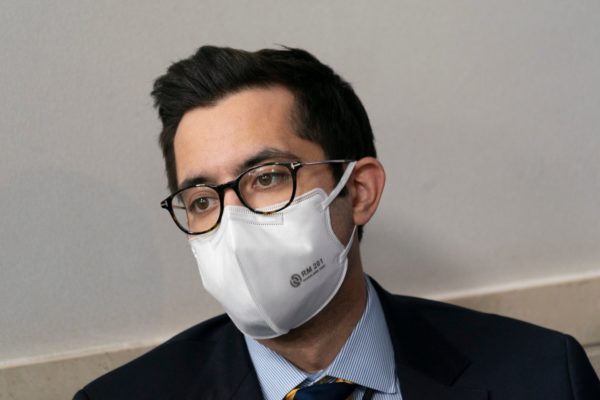 TJ Ducklo listens during a briefing February 9, 2012 at the White House in Washington, D.C. Sipa USA via Reuters Connect
Share:

TJ Ducklo has resigned from his position as White House deputy press secretary following a brief controversy over the appropriate punishment after he threatened a reporter. Ducklo had initially been suspended for one week without pay on Friday after Vanity Fair came out with a story revealing he had threatened Politico’s Tara Palmeri. The move sparked backlash as some said the punishment wasn’t strong enough, particularly considering President Joe Biden had vowed that anyone on his team who showed disrespect would be fired. (Slate’s Dan Kois wrote a piece Friday headlined, “Just Fire TJ Ducklo!”)

My statement on resigning from the White House. pic.twitter.com/3Jpiiv75vB

Press secretary Jen Psaki confirmed Saturday night Ducklo had resigned. “We accepted the resignation of TJ Ducklo after a discussion with him this evening,” Psaki said in a statement. “We are committed to striving every day to meet the standard set by the President in treating others with dignity and respect, with civility and with a value for others through our words and our actions.” Ducklo also issued a statement. “No words can express my regret, my embarrassment, and my disgust for my behavior. I used language that no woman should ever have to hear from anyone, especially in a situation where she was just trying to do her job. It was language that was abhorrent, disrespectful and unacceptable,” he said. Ducklo went on to say he is determined to “earn back the trust of everyone I have let down because of my intolerable actions.”