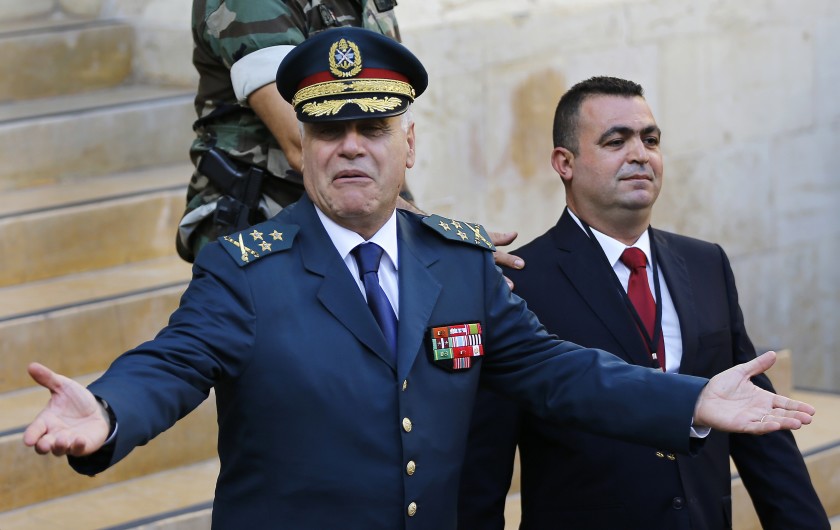 File – In this Oct. 31, 2016 file photo, Lebanese Army Commander Jean Kahwaji, left, reacts as he leaves the parliament building after he attended the session of the presidential elections, in Beirut, Lebanon. Lebanon’s former army chief Jean Kahwaji told the lead investigator of last year’s massive Beirut port blast on Thursday, Feb. 11, 2021, that he recommended years before the explosion that tons of seized ammonium nitrate stored there be sold privately or sent back to importer because the military had no use for them. (AP Photo/Hussein Malla) (ASSOCIATED PRESS)
Share:

BEIRUT —  Lebanon’s former army chief told the lead investigator of last year’s massive Beirut port blast on Thursday that he had recommended, years before the explosion, that tons of seized ammonium nitrate stored there be sold privately or sent back to importers.

The military had no use for the volatile chemical, testified Jean Kahwaji, who was army chief until 2017.

Kahwaji was summoned for questioning as a witness six months after the probe began, the first army official and the most senior security official to testify in the probe.

He told the lead investigator that the customs department had asked the army in late 2015 if it was interested in the stored fertilizer, which could also be used as an explosive. The army, after carrying out tests, said it had no use for the ammonium nitrate because it was a large amount and “has limited use and because it dissolves with time, it constitutes a danger if stored for a long time,” Kahwaji said.

Kahwaji said the army had no room to store it and no ability to get rid of it. He added the army then asked the customs authority to sell it to a private explosive company in Lebanon or to re-export to the country of origin at the expense of the importers.

According to a local media investigation, the importers had carried out their own tests of the nearly 3,000 tons of ammonium nitrate, months after it was stored at the port, and then dropped any claims to the shipment. The chemicals ended up staying in the warehouse for six years before detonating. What sparked the explosion remains unknown.

The volatile fertilizer ignited last Aug. 4, causing one of the largest non-nuclear explosion in history, disfiguring Beirut and killing 211 people. More than 6,000 were injured in the explosion that left over 300,000 homeless.

The shipment entered the port of Beirut in 2013 because of technical problems with the ship. It was then confiscated and stored in a warehouse in the port since 2014.

After the explosion, it was revealed that many of Lebanon’s political and security officials knew of the stored ammonium nitrate, and many of them had warned in internal communication of the dangers of keeping it in the port in hazardous conditions.

The army command, when Kahwaji was in charge, was one of the entities that exchanged letters with the customs department on what to do with the ammonium nitrate.

In April 2016, the army sent a letter to the Customs Authority with its recommendation.

On Thursday, Kahwaji told lead investigator Judge Fadi Sawwan the “army had carried out and continues to carry duties according to the law.” His statement as reported by his lawyer was carried by the National News Agency.

In December, Sawwan filed charges against caretaker Prime Minister Hassan Diab and three former ministers, accusing them of negligence leading to the deaths of hundreds of people.

The charges sparked a backlash and the former ministers challenged the judge’s authority in court, bringing the probe to a halt. But the country’s highest court asked Sawwan to resume his work.

The questioning of Kahwaji signaled the resumption of the probe, and is likely to ease public concerns that the investigation was derailed, given Lebanon’s decades-long culture of impunity and political interference in judicial matters.

Nearly 30 people, most of them port and customs officials, have been arrested since the blast.