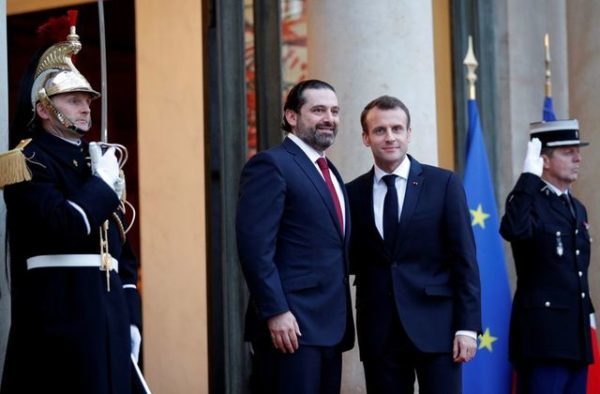 PARIS – Lebanese Prime Minister-designate Saad al-Hariri on Wednesday dined with French President Emmanuel Macron to discuss the crisis in Lebanon and the difficulties in forming a new government, according to Hariri’s Twitter account.

“Presidents Hariri and Macron discussed the internal Lebanese difficulties that hinder the formation of the government and the possible ways to overcome them,” the Twitter post said, adding that the two men had discussed French efforts to resolve the crisis over a two-hour dinner.

Macron has been spearheading international efforts to rescue the former French protectorate from its deepest crisis since the 1975-1990 civil war. Macron is trying to use Paris’ historical influence in Lebanon to persuade squabbling politicians to adopt a roadmap and form a new government to root out corruption, a prerequisite for international donors including the IMF to unlock billions of dollars in aid.

However, those efforts have so far failed.

Highlighting some of that frustration, the French presidency did not include the dinner on Macron’s public agenda keeping the meeting private. Officials had declined to comment earlier in the day on whether the two men would even meet.

Hariri, a former prime minister, was given the task of forming a government after Mustapha Adib resigned in September. He is so far struggling to cobble together a cabinet to share power with all Lebanese parties, including Iran-aligned Hezbollah.

Paris was not initially keen for Hariri to take up the role, having previously failed to implement reforms, French officials have said. But given the lack of progress in forming a credible government, Macron did not oppose the nomination.