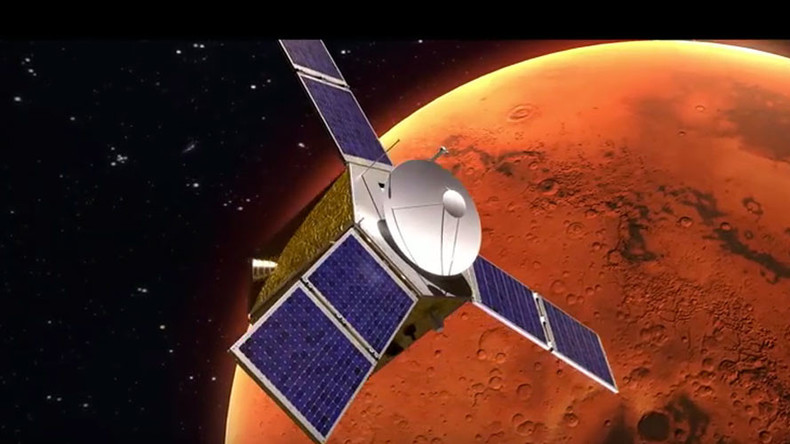 UAE’S Mars mission, named AMAL the Hope probe, reached Mars’ orbit at 7:42 p.m. Tuesday local time and sent a signal back to Earth. This makes the UAE the first Arab country and the fifth globally to reach the red planet. It took it 204 days and more than 480 million to get there .Experts estimated the chance of successfully entering Mars’ orbit at about 50%, since more than half of all Mars missions actually fail. The crucial time window was a terrifying and suspenseful 27 minutes during which the Hope probe had to dramatically slow down from its speed of 100,000 kilometers per hour (62,137 mph) to 18,000 kph by firing its six thrusters for 27 minutes exactly.
Share:

The Emirates Mars mission, named the Hope probe, reached the red planet at 7:42 p.m. Tuesday UAE time, and sent its signal back to Earth just over half an hour later. The ground control team at the Mohammed Bin Rashid Space Centre in Dubai erupted in cheers.

“204 days and more than 480 million kms later, the #HopeProbe is now in the Capture Orbit of #Mars,” the official Twitter account of the Hope Mars Mission tweeted shortly afterward, with the hashtag #ArabsToMars.

The feat is monumental. Experts estimated the chance of successfully entering Mars’ orbit at about 50%, since more than half of all Mars missions actually fail. The crucial time window was a terrifying and suspenseful 27 minutes during which the Hope probe had to dramatically slow down from its speed of 100,000 kilometers per hour (62,137 mph) to 18,000 kph by firing its six thrusters for 27 minutes exactly.

This used up almost half of its fuel, enabling it to be caught by Mars’ gravitational pull and enter into its orbit. There was then a roughly 11-minute communication delay back to Earth as the scientists and engineers involved in the project — which include some 200 Emiratis — waited in tense anticipation to find out whether the mission was a success.

The operation had to be executed with flawless precision, and the stakes high — the current time period during which Earth is closest to the red planet occurs only once every two years.

This makes the UAE only the second country to ever successfully enter Mars’ orbit on its first try, despite attempts being made since the 1960s. The only other country to have done so is India.

Several governments and luminaries in the field expressed their congratulations, including the U.S. State Department, the Indian government, the U.K. Space Agency and celebrity scientist Neil DeGrasse Tyson.

Thomas Zurbuchen, associate administrator at NASA’s Science Mission Directorate, tweeted, “Congratulations @HopeMarsMission on your safe arrival to Mars’ orbit! Your bold endeavor to explore the Red Planet will inspire many others to reach for the stars. We hope to join you at Mars soon with @NASAPersevere.”

The Hope probe is the first to complete its journey out of three Mars missions aiming to breach the planet’s orbit this year; NASA’s Perseverance rover and China’s Tianwen-1 mission also launched in July to take advantage of the period of proximity between Earth and Mars.

Six years in the making

The Hope probe, a $200 million project called Al-Amal in Arabic, was launched on July 20 from Japan’s Tanegashima Space Station and has now culminated its journey to Earth’s neighbor. It will now spend one Martian year — equivalent to 687 days on Earth — studying and gathering data on the red planet’s atmosphere.

That time will enable it to create the first full map of the Martian atmosphere, with the help of three highly specialized instruments developed by the Emirati team: a highly sophisticated camera to photograph Mars and study its lower atmosphere, an ultraviolet spectrometer that will detect the planet’s levels of carbon monoxide and oxygen, and an infrared spectrometer that will measure Martian dust, ice clouds and water.

The year 2021 is also significant: It’s the 50th anniversary of the UAE’s formation as a country.

The UAE’s ambitious project was six years in the making and has made the small Gulf sheikhdom only the fifth country in the world to reach Mars. These missions normally take at least 10 years to design and plan, said Sarah al-Amiri, minister of state for advanced technology and chairwoman of the UAE Space Agency.

“The first of our challenges was designing a mission to another planet for the very first time,” al-Amiri told CNBC’s Dan Murphy earlier in the week.

We hope for Hope as we send the message and vision of the UAE to the Red Planet. #ArabsToMars #HopeProbe pic.twitter.com/8SIJq09ATU

“That included mobilizing our team who has been working on Earth observation satellites, but then filling in and bridging the gaps, because spacecrafts that orbit Earth are slightly different from spacecraft that go towards other planets,” she said.

“The challenges were technical in nature, we needed to ensure that the spacecraft is highly reliable for its journey, it’s able to think for itself, that the components within the spacecraft can operate for the duration of the entire mission,” she added.

The Emirates Mars Mission partnered with a team from the University of Colorado Boulder to build the spacecraft, drawing on expertise from the university’s Laboratory for Atmospheric and Space Physics. But the oil-rich Gulf country itself has spent years investing in space research and development, founding its own space agency in 2014 after launching satellites in 2009 and 2013 developed jointly with South Korean partners.

Congratulations from all of us at the U.S. Mission on the successful #HopeMarsMission.🚀🎉#PartnersInSpace 🇺🇸🇦🇪

The UAE government has launched various campaigns to expand the country’s science, technology, engineering and math sector, and it views its growing space program as an important part of that. It’s also the first country to have a minister of artificial intelligence and is investing heavily in its own indigenous defense industry.

Emirati officials see the Mars mission as helping drive interest in science and space exploration among the country’s youth, enabling growth in sectors that will be crucial for a post-oil future. And women in particular are an important part of this evolution: officials say women made up 80% of the Mars mission’s Emirati team.

“This will be our drive from this mission onwards over the course of the next five years: to ensure that there is a very well-established and connected-globally connected space sector within the Emirates,” al-Amiri said.

The UAE space mission long had the goal to get a probe to Mars by its 50th anniversary — but by 2017 it already had even loftier targets, including a directive by Dubai ruler Sheikh Mohammed bin Rashid Al Maktoum to establish the first human colony on Mars by the year 2117.

It may seem hard to imagine, but so did today’s hyper-modern UAE 100 years ago, when only scattered Bedouin tribes populated the the vast expanse of harsh red and gold desert — a landscape not so different from that of Mars itself.