US Senate declares that Trump’s impeachment trial is constitutional 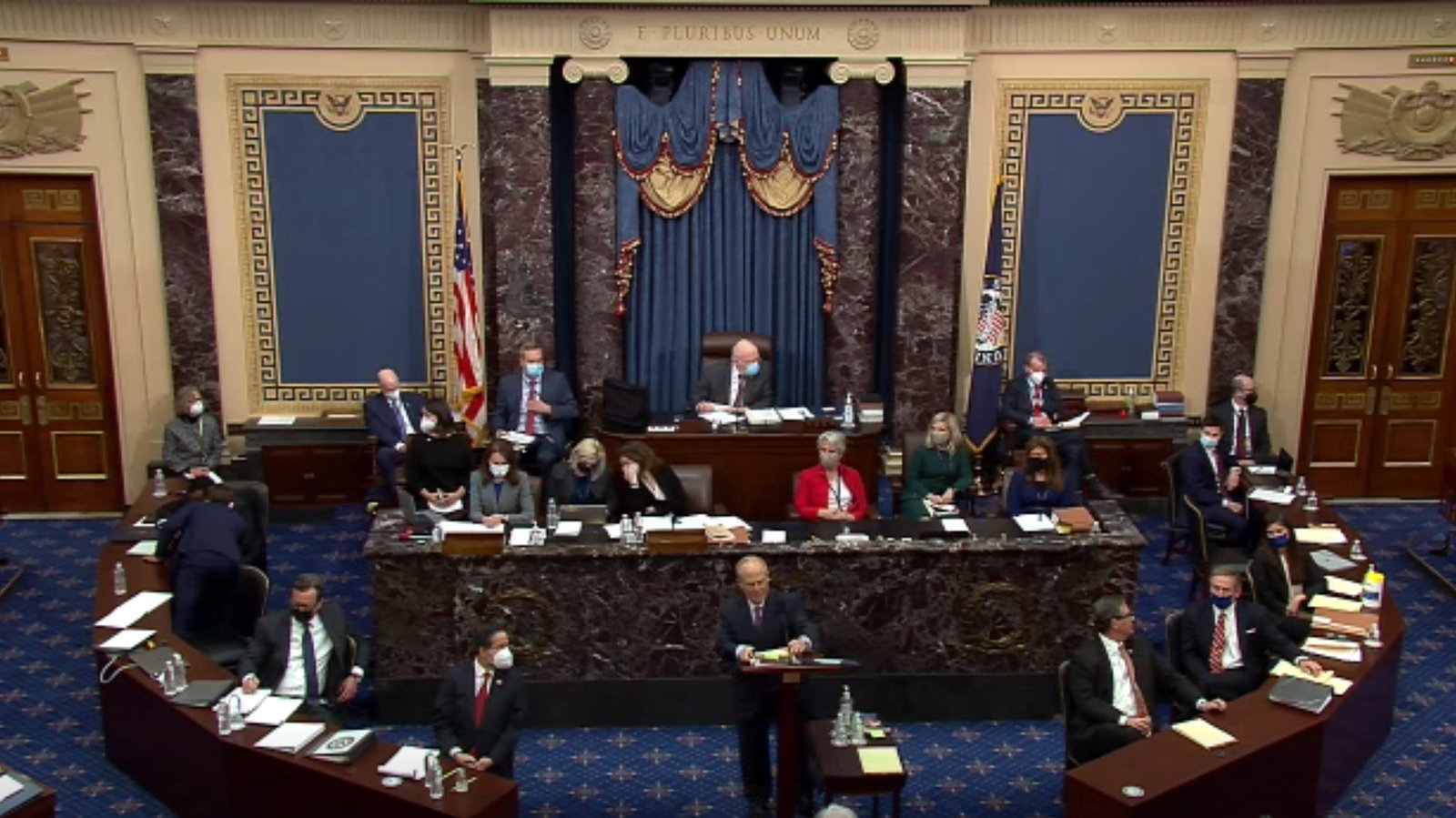 WASHINGTON, DC – FEBRUARY 9: In this screenshot taken from a congress.gov webcast, David Schoen, defense lawyer for former President Donald Trump speaks on the first day of former President Donald Trump’s second impeachment trial at the U.S. Capitol on February 9, 2021 in Washington, DC. House impeachment managers will make the case that Trump was “singularly responsible” for the January 6th attack at the U.S. Capitol and he should be convicted and barred from ever holding public office again. (Photo by congress.gov via Getty Images)
Share:

The second impeachment trial of Donald Trump will move forward after the Senate voted Tuesday that the trial of a former president is constitutional.

Trump was impeached by the House last month on a charge of inciting an insurrection at the U.S. Capitol on Jan. 6.

The Senate vote on Tuesday was 56-44, with six Republicans joining all 50 members of the Democratic caucus.

The Republicans who voted for the trial’s constitutionality were Sens. Susan Collins of Maine, Bill Cassidy of Louisiana, Lisa Murkowski of Alaska, Mitt Romney of Utah, Ben Sasse of Nebraska and Pat Toomey of Pennsylvania.

Cassidy’s vote is notable because he was the only senator to switch sides from an early procedural vote on the trial’s constitutionality.

The Louisiana Republican told Capitol Hill reporters that he thought Trump’s legal team did “a terrible job” on Tuesday.

The trial will begin its next phase on Wednesday at noon ET. Each side — House impeachment managers, followed by Trump’s defense team — will have up to 16 hours over two days to make its case for conviction or acquittal.

Here’s a look at what happened on Day 1.

It started with a video

House impeachment managers began by showing members of the Senate a graphic video that walked through the events that took place on Jan. 6, including Trump’s comment to supporters ahead of the riot that “we will stop the steal,” referencing his baseless claims of election fraud.

The video documents the cascading events of the day, including Trump supporters erecting a makeshift gallows with a noose, breaching the Capitol, chanting, “No Trump, no peace” and using American flags to break the building’s windows — and a police officer screaming in pain as he was attacked.

Interspersed throughout the disturbing footage were videos and tweets from Trump that day, including his comment to supporters to “go home. We love you. You’re very special.”

“If that’s not an impeachable offense, then there is no such thing,” Raskin said.

Ahead of the trial, Democrats previewed that their argument would be a visceral one, based largely off public evidence. The video set the tone for that strategy, immediately taking lawmakers who experienced the attack back to the events of that day.

House managers also addressed scholarly interpretations of the Constitution, arguing there is consensus among legal experts that a trial of a former president is, in fact, constitutional.

Raskin, a former constitutional law professor, dismissed claims that you can try a president only while the president is in office.

“Their argument is that if you commit an impeachable offense in your last few weeks in office, you do it with constitutional impunity,” he said. “You get away with it.” He called this the “January exception” to impeachment.

Democrats ended their arguments for the day on an emotional appeal from Raskin. He tearfully recounted his family’s experience during the attack, in which he was separated from his 24-year-old daughter and son-in-law. “They thought they were going to die,” he said.

Raskin said the deadly events on that day “cannot be the future of America.”

Trump’s lawyers offered an at-times-rambling defense of the former president that was multipronged: that the trial itself is unconstitutional, that Trump’s comments about the election are protected under the First Amendment and that Trump was not responsible for inciting the mob that breached the Capitol.

Bruce Castor, one of Trump’s attorneys, delivered a meandering and long-winded opening argument, saying that the effort to try Trump is a partisan maneuver that could come back to haunt Democrats.

“The Republicans might regain the House in two years,” he said, alleging there would be pressure for the GOP to respond with further impeachments.

“The political pendulum will shift one day,” Castor said. “And partisan impeachments will become commonplace.”

Another Trump attorney, David Schoen, spoke at length about constitutional issues, trying to make the case that the Senate does not have jurisdiction to try “private citizen” Trump.

And he played his own video montage of Democrats over the years calling for Trump’s impeachment and argued the trial will only further divide America.