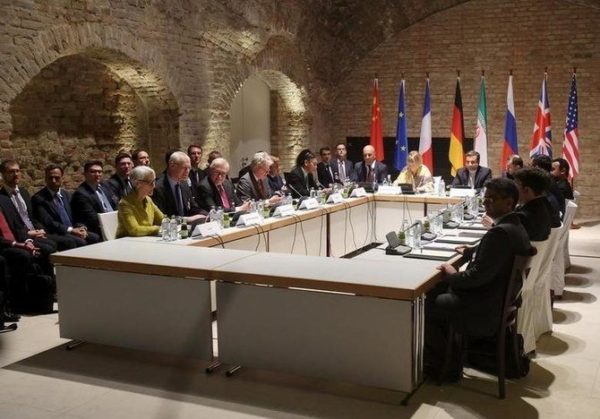 Negotiators of Iran and six world powers face each other at a table in the historic basement of Palais Coburg hotel in Vienna, April 24, 2015. (Reuters)
Share:

On the day that Iranian Maj. Gen. Qassem Soleimani was assassinated in Baghdad last January, he was a field commander in the Islamic Revolutionary Guards Corps (IRGC), moving across borders between Lebanon, Syria and Iraq, which for him were the same theater of operation. In fact, what seem like failed states in the region can be considered successful IRGC operations. In Palestine, Lebanon, Syria, Iraq and Yemen, what seem like unrelated organizations operate under the same banner. They gain control using similar methods, including assassinations, paralysis, economic collapse, a constant state of crisis, and ideologically fueled violence. By ignoring the actions of the IRGC in negotiations with Iran, Tehran can stick to agreements like the Joint Comprehensive Plan of Action (JCPOA), which it negotiated with the West while having a free hand to pursue a destabilizing agenda through its proxies, making the Middle East look like a failed region.

Hamas, Hezbollah, Al-Hashd Al-Shaabi and the Houthis all follow the same pattern of collapsing the state and replacing it with parallel institutions. Hezbollah is active in Lebanon, Syria, Iraq and Yemen, and coordinates closely with Hamas in Palestine. The instruments used include suppressing dissent through targeted assassinations and holding the state hostage through paralysis.

In Lebanon, the assassinations started by taking on internal dissent within the Shiite community, targeting people like Daoud Daoud, Mahmoud Faqih and Hassan Sbayti, who were leaders of the rival Amal Movement. Three years of infighting between the two groups ended with Hezbollah hegemony in 1990. Then came the assassinations of former Prime Minister Rafik Hariri in 2005, journalists like Gebran Tueni, politicians like Pierre Gemayel and Walid Eido, army and security personnel like Wissam Eid and Francois Hajj, and civil society activists like Samir Kassir. The same is still happening in Iraq, where 2020 was the year of assassinations, with the victims including Hisham Al-Hashimi, Reham Yaqoub, Tahseen Ali and Ludia Remon. In Yemen, the assassination of government minister Hassan Zaid last year — as well as those of prominent dissenters Ahmed Sharaf Al-Din, Abdul Karim Jadban, Mohammed Abdul-Malik Al-Mutawakel and Abdul Karim Al-Khaiwani — followed the same pattern.

Control is gained in one country after another by contributing to the collapse of state institutions and replacing them with alternative ones tied together through their links to Iran. The Iranian toolkit also includes gaining time through negotiations, creating paralysis, and demands like integration into state institutions and formalizing the inclusion of militias in the military through headlines like a “common or integrated defense strategy” under the pretext that the official armies are ineffective. In Gaza, Hamas holds the population hostage, under siege, and maintains the state of war and poverty, while any reprieve can only be obtained by way of Hamas’ own negotiations with Israel. Through corruption and clientelism, the militias penetrate state institutions and bankrupt them, often empowering their own alternatives and thus constituting a parallel state feeding on the carcass of its victim.

These proxies can also play a dual role: One as an integral part of the societies they penetrate and the other as contingents of the IRGC. In Yemen, for example, the Houthis negotiate like a political actor but at the same time behave like an unaccountable militia, escalating violence and working outside the confines of the Stockholm Agreement. In Lebanon, Hezbollah is part of the government and parliament, and, along with its allies, has veto power that can create paralysis for months on end. In Iraq, while there are four main players that are part of the Tansiqiya (coordination) committee, there is also a proliferation of unknown organizations that spring up with different names. Fragmentation also renders the parallel order of the militias “antifragile” and difficult to pin down. This gives Iran and the IRGC plausible deniability about their role in the various conflicts in the region.
While Iran sees the whole region as one theater of operations, the picture from Washington looks different, with each context seen as separate and the conflicts unconnected. The region also looks chaotic, hopeless and full of unresolvable problems and dysfunctional societies. One example is the summer of 2006, when Iranian proxies created chaos and war in Gaza, Lebanon and Iraq at the same time. The reaction in Washington to such an impression is bipartisan consensus on the need to get out of the region because it is impossible to manage.

While Iran views the region as a chessboard, the US sees it more like a poker table. In a game of chess, every move is linked to future moves and the game has a precise final goal. Chess pieces can also be sacrificed toward that goal — short-term loss with the aim of long-term gain. Here the enemy is clearly the US and the aim is to drive it out of the region.

In the American poker game, each hand is seen as independent. There is no overall aim and no constant, identifiable enemy. The US feels it can win some and lose some and pull out of the game at any time. Washington’s poker game is also weak and fragmented and, because of internal politics, it seems to be playing with its cards on show.

A deal like the JCPOA, for example, was seen as a success by both sides, but for different reasons. For Iran, it was a temporary sacrifice that gave it a free hand to pursue larger regional aims (against US interests). The US saw it as a successful negotiation regardless of its effect of empowering the IRGC in the larger game. It was a success in a region where every other initiative was failing.

Moves to address the larger picture, like adding the IRGC or any of its proxies to the list of terrorist organizations or imposing additional sanctions, become entangled in internal partisan politics, where the parties in the US aim to score points against each other and are divorced from the original context.

The combination of all these factors gives a huge win to Iran. The IRGC, through its proxies, can flare up the whole region while making the various crises seem like separate, unrelated incidents. This confuses the US into thinking that the region is endemically dysfunctional and impossible to fix. At the same time, Iran can look like it is complying with agreements like the JCPOA and give some semblance of being a stable, reliable actor.

Nadim Shehadi is the executive director of the LAU Headquarters and Academic Center in New York and an Associate Fellow of Chatham House in London.