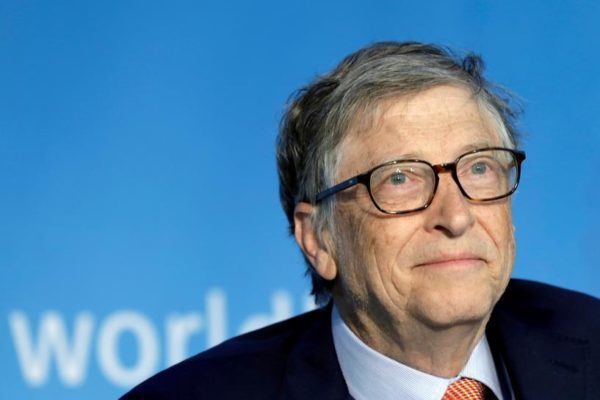 File photo of Bill Gates , a billionaire who stepped down as chairman of Microsoft Corp in 2014, has through his philanthropic Bill and Melinda Gates Foundation committed at least $1.75 billion to the global response to the COVID-19 pandemic. That includes support for some makers of vaccines, diagnostics and potential treatments.
Share:

With better testing, new treatments and vaccines raising hopes for an eventual end to the COVID-19 pandemic, Bill Gates is mapping out a battle plan for the next time a dangerous new pathogen appears.

In the annual letter from the Bill & Melinda Gates Foundation, the Microsoft co-founder calls for billions of dollars in investments to develop a global alert system for emerging germs and build the capacity to respond quickly.

“We can’t afford to be caught flat-footed again,” Gates wrote. “To prevent the hardship of this last year from happening again, pandemic preparedness must be taken as seriously as we take the threat of war.”

While the cost may sound high, billions spent on infrastructure and technology would represent a huge savings compared to the estimated $28 trillion global toll of COVID-19 and its associated economic fallout, he said.

Gates has long been sounding the alarm about pandemic dangers, including in a 2015 TED talk that has been viewed more than 39 million times. While it might have been easy to ignore those warnings when the last major outbreak was a century in the past, that’s no longer possible, he says.

“No one needs to be convinced that an infectious disease could kill millions of people or shut down the global economy.”

Rich countries now need to double down on spending for research and development, he said. That includes work on “mega-diagnostic” testing platforms, which Gates predicts could allow screening of more than 100 million people every week.

Such large-scale testing would be the backbone of the global alert system he envisions, where a rural health-care worker in Zambia or Bangladesh who notices unusual sickness could send specimens for rapid testing and genetic sequencing.

He also argues for the creation of a global corps of 3,000 infectious disease first responders who would spring into action like firefighters when new outbreaks flare anywhere in the world and prevent them from throwing off sparks that lead to runaway spread.

Regular simulations akin to war games — Gates calls them “germ games” — will be vital so health systems and governments will be able to gear up with little warning.

“Speed matters in a pandemic,” Gates wrote. “The faster you act, the faster you cut off exponential growth of the virus.”

The Gates Foundation has invested $1.75 billion in the fight against COVID-19 so far and pivoted much of its staff to pandemic-related projects. The funding helped support research on vaccines and promising treatments called monoclonal antibodies. Much of the money is earmarked to ensure developing countries don’t lose out as rich countries snap up supplies of vaccines and drugs.

That prospect of “immunity inequality,” where the wealthiest people get vaccines that don’t reach the world’s poorest populations, is deeply concerning, Melinda Gates said in her section of the letter.

“As things stand now, low- and middle-income countries will only be able to cover about one in five people … over the next year,” she wrote.

While the response to COVID-19 has been lackluster, the major successes were built on previous investments, Bill Gates pointed out.

After the Ebola epidemic in West Africa, The Gates Foundation partnered with several governments to create CEPI — the Coalition for Epidemic Preparedness Innovations — to accelerate vaccine development. That organization funded and trials on several COVID-19 vaccines and treatments.

Investments in messenger RNA technology laid the groundwork for the speedy development of the two vaccines approved in the U.S. Thanks to that momentum, Gates predicts mRNA vaccines will become more stable, easier to store and faster to produce over the next five to 10 years.

Though the presidential election isn’t mentioned in the letter, the Gates Foundation is undoubtedly also looking forward to greater global engagement by the U.S. President Joe Biden who  has announced the country will rejoin the World Health Organization and contribute to the COVAX Facility — an international fund to purchase vaccines for low income countries. The letter notes that the latest COVID-19 relief package includes $4 billion for Gavi, an alliance that provides vaccines to the world’s poorest people.

“Viruses like COVID-19 remind us that, for all our differences, everyone in the world is connected biologically by a microscopic network of germs and particles,” the letter says. “And that, like it or not, we’re all in this together.”