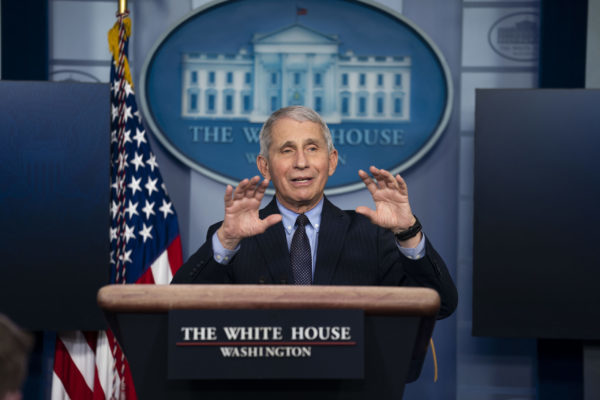 Dr. Anthony Fauci, director of the National Institute of Allergy and Infectious Diseases, addresses reporters about the coronavirus pandemic during a briefing at the White House in Washington on Thursday, Jan. 21, 2021. (Doug Mills/The New York Times)
Share:

Anthony Fauci on Thursday said it has been “liberating” to work as the nation’s top infectious diseases doctor under President Biden after his experience working for former President Trump.

Speaking at the White House press briefing, Fauci was asked if he feels “less constrained” in the new administration after clashing with Trump and eventually being sidelined last year.

“I can tell you I take no pleasure at all in being in a situation of contradicting the president, so it was really something that you didn’t feel you could actually say something and there wouldn’t be any repercussions about it,” he said. “The idea that you can get up here and talk about what you know, what the evidence and science is, and know that’s it — let the science speak — it is somewhat of a liberating feeling.”

Dr. Fauci on working under Biden: "It is somewhat of a liberating feeling." pic.twitter.com/XDb99sBVoQ

Fauci became a national star as a public spokesman for the Trump administration’s coronavirus response.

But he eventually ran crossways with Trump, who often downplayed the virus and made unsupported claims about “miracle” drugs such as hydroxychloroquine. Trump at one point said he was taking the medication to prevent COVID-19.

“It was very clear that there were things that were said regarding things like hydroxychloroquine and other things like that, that was uncomfortable because they were not based on scientific fact,” Fauci said.

He said his willingness to break with Trump is “why I got in trouble sometimes,” but he does not have the same fears about working for Biden.

“One of the things that was very clear as recently as about 15 minutes ago when I was with the president, is that one of the things we’re going to do is be completely transparent open and honest. If things go wrong, not point fingers but correct them, and to make everything we do be based on science and evidence. That was literally a conversation I had 15 minutes ago with the president, and he has said that multiple times,” he said.