A mob and the breach of democracy: The violent end of the Trump era 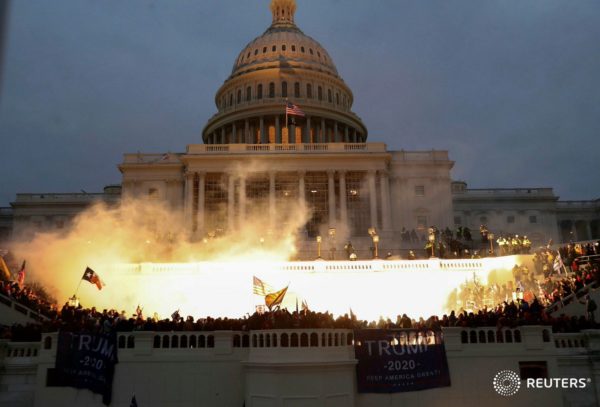 So this is how it ends. The presidency of Donald John Trump, rooted from the beginning in anger, division and conspiracy-mongering, comes to a close with a violent mob storming the Capitol at the instigation of a defeated leader trying to hang onto power as if America were just another authoritarian nation.

The scenes in Washington would have once been unimaginable: A rampage through the citadel of American democracy. Police officers brandishing guns in an armed standoff to defend the House chamber. Tear gas deployed in the Rotunda. Lawmakers in hiding. Extremists standing in the vice president’s spot on the Senate dais and sitting at the desk of the speaker of the House.

The words used to describe it were equally alarming: Coup. Insurrection. Sedition. Suddenly the United States was being compared to a “banana republic” and receiving messages of concern from other capitals. “American carnage,” it turned out, was not what Trump would stop, as he promised upon taking office, but what he wound up delivering four years later to the very building where he took the oath. .

The convulsion in Washington capped 1,448 days of Twitter storms, provocations, race-baiting, busted norms, shock-jock governance and truth-bending from the Oval Office that have left the country more polarized than in generations. Those who warned of worst-case scenarios only to be dismissed as alarmists found some of their darkest fears realized. By day’s end, even some Republicans suggested removing Trump under the 25th Amendment rather than wait two weeks for the inauguration of President-el ..

The extraordinary invasion of the Capitol was a last-ditch act of desperation from a camp facing political eviction. Even before the mob set foot in the building on Wednesday afternoon, Trump’s presidency was slipping away. Democrats were taking control of the Senate with a pair of Georgia runoff election victories that Republicans angrily blamed on the president’s erratic behavior.

Two of his most loyal allies, Vice President Mike Pence and Sen. Mitch McConnell of Kentucky, the Senate Republican leader, broke with Trump in a way they had never done before, refusing to go along with his bid to overturn a democratic election after standing behind him or standing quiet through four years of toxic conflict, scandal and capriciousness. And even more Republicans lost patience after the Capitol takeover.

“What we have seen today is unlawful and unacceptable,” said Rep. Cathy McMorris Rodgers of Washington state, a member of the House Republican leadership who reversed plans to join Trump’s effort to block the election results. “I have decided I will vote to uphold the Electoral College results and I encourage Donald Trump to condemn and put an end to this madness.”

Sen. Roy Blunt of Missouri, a senior Republican, said he had no more interest in what Trump had to say. “I don’t want to hear anything,” he told reporters. “It was a tragic day and I think he was part of it.”

The cascade of criticism came even from within Trump’s circle, as advisers expressed concern about how far he has been willing to go to undo an election he lost. At least three aides, Stephanie Grisham, Sarah Matthews and Rickie Niceta, resigned, with more expected to follow. After he initially offered only mild statements calling on the mob in the Capitol to be peaceful, several members of Trump’s team publicly implored him to do more.

“Condemn this now, @realDonaldTrump,” Alyssa Farah, who just stepped down as his communications director last month, wrote on Twitter. “You are the only one they will listen to. For our country!”

Mick Mulvaney, who served as Trump’s White House chief of staff and still serves as a special envoy, made a similar appeal. “The best thing @realDonaldTrump could do right now is to address the nation from the Oval Office and condemn the riots,” he wrote. “A peaceful transition of power is essential to the country and needs to take place on 1/20.”

Moments after Biden went on live television to deplore the “insurrection” at the Capitol and call on Trump to go before cameras, the president released a recorded video online that offered mixed messages. Even as he told supporters it was time to withdraw, he praised them rather than condemning their actions while repeating his grievances against people who were “so bad and so evil.”

“I know you’re hurt,” he told the rioters. “We had an election that was stolen from us. It was a landslide election and everyone knows it, especially the other side. But you have to go home now.” He added: “We love you. You’re very special.” Rather than calming the waters, the video was seen as further roiling them — so much so that Facebook and Twitter took it down and Twitter temporarily suspended Trump’s account.

Tom Bossert, the president’s former homeland security adviser, called out his former boss. “This is beyond wrong and illegal,” he said on Twitter. “It’s un-American. The President undermined American democracy baselessly for months. As a result, he’s culpable for this siege, and an utter disgrace.”

While Washington has seen many protests over the years, including some that turned violent, the uprising on Wednesday was unlike anything that the capital has seen during a transition of power in modern times, literally interrupting the constitutional acceptance of Biden’s election victory.

The assault on the Capitol was the first by a hostile group of invaders since the British sacked the building during the War of 1812, according to the U.S. Capitol Historical Society. Four Puerto Rican nationalists entered the building peacefully in 1954 and sat down in the House visitors gallery, at which point they pulled out guns and opened fire indiscriminately, injuring five lawmakers.

But none of them was egged on by an American president the way that Trump seemed to do on Wednesday during a “Save America March” on the Ellipse south of the White House just as Congress was convening to validate Biden’s election.

But none of them was egged on by an American president the way that Trump seemed to do on Wednesday during a “Save America March” on the Ellipse south of the White House just as Congress was convening to validate Biden’s election.

“We will never give up,” Trump had declared. “We will never concede. It doesn’t happen. You don’t concede when there’s theft involved. Our country has had enough. We will not take it anymore, and that’s what this is all about.”

“We will never give up,” Trump had declared. “We will never concede. It doesn’t happen. You don’t concede when there’s theft involved. Our country has had enough. We will not take it anymore, and that’s what this is all about.”

As the crowd on the Ellipse chanted, “Fight for Trump! Fight for Trump!” the president lashed out at members of his own party for not doing more to help him cling to power over the will of the people. “There are so many weak Republicans,” he growled and then vowed to take revenge against those he deemed insufficiently loyal. “You primary them,” he said.

He singled out Gov. Brian Kemp of Georgia, a Republican who has angered him by not intervening in the election, calling him “one of the dumbest governors in the United States.” And he went after William Barr, the attorney general who debunked his false election complaints. “All of a sudden, Bill Barr changed,” he groused.

Other speakers, including his sons Donald Trump Jr. and Eric Trump, castigated Republican lawmakers for not standing up for the president. “Let’s have trial by combat,” exhorted Rudy Giuliani, the former New York mayor who has served as the president’s personal lawyer.

But the question is for how long. Trump faced the end of his reign much as he began it, without the support of most Americans even as he has presented himself as a self-proclaimed billionaire champion of everyday people. He won through the Electoral College in 2016 with nearly 3 million fewer votes in the popular tally than his opponent and lost by 7 million in November.

He did not earn the approval of a majority of Americans in major surveys for a single day of his tenure, unlike any of his predecessors in the history of polling.

Had it not been for the attack on the Capitol, the break by Pence and McConnell would have been a political earthquake by itself. Pence rebuffed the president’s demand that he use his role as presiding officer over the Electoral College count to reject electors for Biden. And McConnell gave a forceful speech repudiating Trump’s effort to overturn the election.

“If this election were overturned by mere allegations from the losing side, our democracy would enter a death spiral,” McConnell said before the Capitol was overrun.

Pence released a letter saying he did not have the power to do what the president wanted him to do. “Vesting the vice president with unilateral authority to decide presidential contests would be entirely antithetical” to the constitutional design, he wrote.

He added: “It is my considered judgment that my oath to support and defend the Constitution constrains me from claiming unilateral authority to determine which electoral votes should be counted and which should not.”

With Pence unwilling and unable to stop the count, the president’s supporters made it their mission to do it themselves. And for several hours, they succeeded. But after they were finally cleared out of the Capitol, lawmakers resumed the process of ending the Trump presidency, no matter how much he resists.