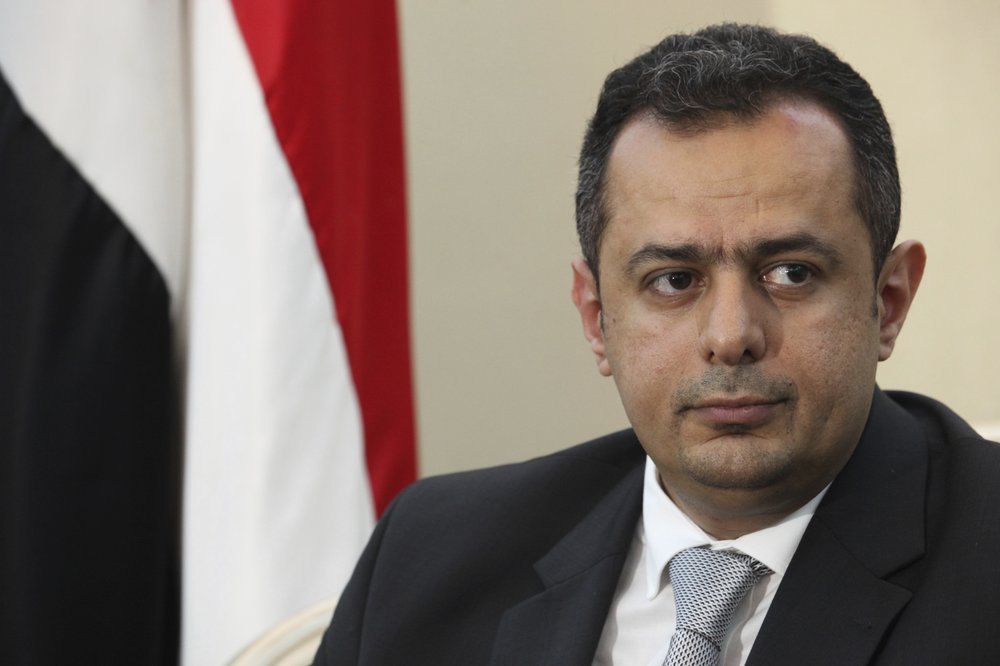 FILE – In this Wednesday, Dec. 12, 2018 file photo, Maeen Abdulmalik Saeed, the prime minister of Yemen’s internationally recognized government that the Saudi-led coalition backs, is interviewed by foreign journalists in Aden, Yemen. Yemen’s prime minister Maeen Abdulmalik Saeed on Saturday Jan. 2, 2021, said that an attack on the airport in the key port city of Aden was meant “to eliminate” the country’s new government. The Prime Minister spoke to The Associated Press after he survived Wednesday’s attack that killed at least 25 people and wounded 110 others. (AP Photo/Jon Gambrell, File)
Share:

Yemen’s prime minister on Saturday said that a missile attack on the airport in Aden was meant “to eliminate” the country’s new government as it arrived in the key southern city — a daring assault which he blamed on Iran-backed rebels.

Prime Minister Maeen Abdulmalik Saeed spoke to The Associated Press in an interview conducted at his office in the Mashiq Palace in Aden. It was the leader’s first interview with international media after he survived Wednesday’s attack that killed at least 25 people and wounded 110 others.

“It’s a major terrorist attack that was meant to eliminate the government,” the premier said. “It was a message against peace and stability in Yemen.”

aeed repeated his government’s accusations that Yemen’s Houthi rebels were responsible for the missile attack on the airport and a drone assault on the palace, shortly after the premier and his Cabinet were transferred there.

The new Yemeni government was formed in December to end a dangerous political rift with southern separatists who are backed by the United Arab Emirates. The internal rift threatened the UAE’s partnership with Saudi Arabia that is fighting the Houthis in Yemen.

Saeed said that the “techniques” used in the airport missile attack were hallmarks of the Houthis’ strategy.

Houthi officials have denied being behind the attack, but sought to blame unspecified groups in the Saudi-led coalition. The rebel leaders have not offered any evidence nor answered requests for comment.

The Houthis have carried out similar attacks in the past. In 2015, former Yemeni Prime Minister Khaled Bahah and members of his Cabinet survived a missile attack, blamed on the Houthis, that struck an Aden hotel used by the government. Last year, the Houthis fired a missile at a military parade of a militia loyal to the UAE at a base in Aden, killing dozens.

The attack took place moments after a plane carrying Saeed and his Cabinet members landed at the airport. AP footage from the scene at Aden’s airport showed members of the government delegation disembarking as the blast shook the tarmac, with many ministers rushing back inside the plane or running down the stairs, seeking shelter.

Saeed said three precision-guided missiles had struck the facility, targeting his plane, the arrival hall and the VIP lounge of the airport.

“The guidance accuracy was great. The operation was huge,” he said.

Saeed and his newly formed Cabinet were returning to Yemen a week after they were sworn in before Yemeni President Abed Rabbo Mansour Hadi in Saudi Arabia’s capital, Riyadh, where the embattled leader resides.

The Cabinet reshuffle was part of a power-sharing deal between the Saudi-backed Hadi and the secessionist Southern Transitional Council, an umbrella group of militias seeking to restore an independent southern Yemen, which existed from 1967 until unification in 1990.

Saeed, the prime minister, said his government would prioritize “security and stability” in government-held areas after months of infighting between Hadi’s government and the STC.

“Whatever the challenges in Aden, the government remains,” he said.

He also pointed to “huge” economic challenges as being the focus of his government.

The conflict in the Arab world’s most impoverished nation began when the Houthis captured the capital of Sanaa in 2014, forcing Hadi’s government to flee.

The following year, the Saudi-led coalition intervened against the Iran-backed rebels in what has turned into a stalemated war. Since then, more than 112,000 people — fighters and civilians — have been killed.