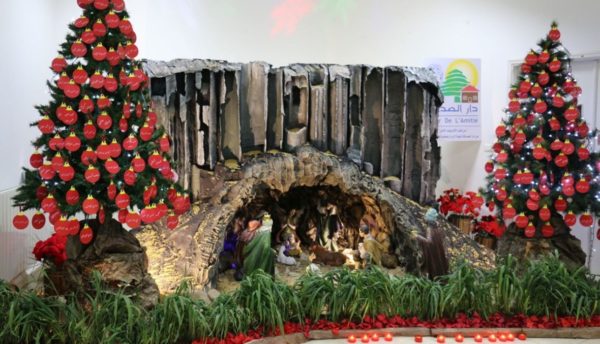 Christmas memorial in Zahle to honor the port explosion martyrs/ Each ornament carries the name of the one of the victims of the explosion . 200 people were killed , several still missing , 6500 Injured after 2,750 Tonnes of Ammonium Nitrate Exploded . They were stored there for nearly 7 years. The shelf life of the product is supposed to be 6 months according to experts . After 6 months it starts solidifying and becomes more explodable . President Michel Aoun and PM Diab knew about the Ammonium Nitrate 2 weeks before the explosion but did nothing about it . Judge Fadi Sawan who is in charge of the investigation charged Diab , former finance minister Ali Hassan Khalil, and former public works ministers Ghazi Zeaiter and Youssef Finianos with negligence over the explosion . The politicians behind the charged politicians attacked the judge and accused him of politicizing the issue
Share:

The City of Zahle in the Bekaa region of Lebanon erected , a memorial to honor the martyrs – victims of the port explosion in Beirut which consists of Christmas trees next to a cave containing the symbol of the Resurrection, in the “Friendship House of the social charitable institution ” .

A model of wheat silo was erected , in the center of the Nativity scene, to tell the world, according to Father Talal Taab, director of the house, that despite the great pains, sufferings and diseases, we will remain children of hope and resurrection. The model depicts the destruction of the wheat silo as a result of the devastating explosion of Aug 4, 2020 and how the new wheat sprouted from the blood of the victims. Two Christmas trees were adorned with the names of all the victims who were killed in the explosion. The model is by Lebanese artist Ali Houmani.