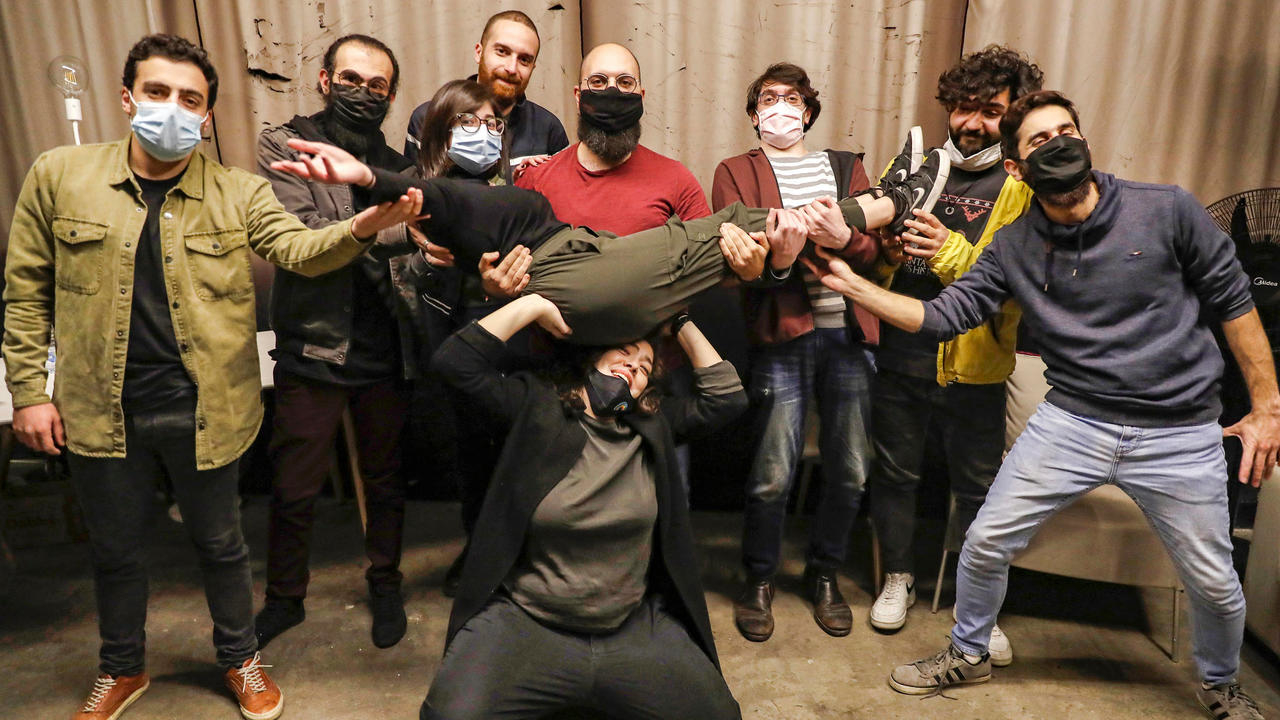 Lebanese stand-up comedians from the comedy club Awk.word have been bringing relief to the crisis-hit country JOSEPH EID AFP
Share:

Lebanese comedians are bringing relief and defying taboos with jokes about dating, partying during the pandemic — and how even drug dealers are considering leaving the crisis-hit country.

Laughter erupts in a venue wedged between two districts devastated by a deadly August 4 explosion that ravaged the Beirut port and swathes of the Lebanese capital.

The blast exacerbated a year-long acute financial crisis and political deadlock, as the country also struggled with a surge in novel coronavirus infections.

“The situation is so bad that even the flea market has slashed its prices by 50 percent,” joked Nicolas Tawk.

Tawk is one of nearly a dozen comedians who took to the stage on a rainy December evening as part of an event organised by the stand-up comedy club aptly named “awk.word”.

He was followed by a comedy duo who reworked the lyrics of Gloria Gaynor’s hit “I Will Survive” to sing about a multitude of frustrations the Lebanese have been struggling.

And then, strumming a guitar, they belted out a popular Lebanese hit from the 1980s — Ummi Ta Nur’os (Let’s get up and dance) — the words changed to convey the challenges of partying during the pandemic.

“Get up and dance, young lady, but wait for me to disinfect my hands. Don’t freak out, I’ll put on my mask,” they sang.

Comedians have found plenty of material in the many mishaps of Lebanon, a multi-confessional country still deeply divided after the 1975-1990 civil war.

They take aim at the sectarian divisions of society and poke fun at traditions they feel are outdated and hypocritical, all the while taking jabs at politicians who have been in power for decades and are widely accused of corruption and incompetence.

Nour Hajjar, a prominent comedian, said stand-up comedy offers some “breathing room” to the Lebanese, who feel shackled by too many crises.

But the jokes delivered also remind people “why they are under tremendous pressure and why they are so sad”, said the 28-year-old.

“The situation is so shitty that even the drug dealer is complaining that there is no market” and wants to emigrate to Canada, joked Hajjar, his brown curls bouncing as he laughs along with the crowd.

Many Lebanese, particularly young ones, have emigrated in recent years because of the country’s economic crisis — the worst since the civil war.

More than half of the population is now trapped in poverty, according to the United Nations.

Over the past year, the Lebanese pound has lost more than two thirds of its value against the dollar on the black market and commercial banks have halted dollar transactions to protect dwindling reserves.

Mario Mubarak worked as a bank teller before joining the stand-up scene and had a front-row seat to the country’s financial decline.

One day, he said, a nun came to the bank and asked to withdraw $300 from her account, explaining she wanted the money to help a nephew who was sick and needed treatment.

Mubarak, who has since quit his job, told her there was nothing he could do and that she would be better off praying instead.

“Despite everything that has happened, people just want to laugh,” Mubarak told AFP.

“We’ve been through pain and tragedy and it’s still not over.”

“It’s like Xanax,” she said, referring to the drug used to treat anxiety and depression.

Shedding light on tragedies is also a way to challenge taboos and the political status quo, she added.

A feminist and vocal LGBTQ activist, Shaden makes a mockery of machismo in a society that remains largely conservative.

“Society has put up many barriers against women. We need to break them down,” she said.

“We talk about sex, not just to make people laugh, but also to say that women have a voice.”

For many performers, Shaden included, it is still too soon to joke about the Beirut blast. But everything else — God, sex, religion — is fair game.

Joelle Jabbour sat among the audience, laughing with the others.

“Laughing at what makes you sad, it lightens you up a bit,” she added.

“It’s part of their (the comedians) life and our life. It’s funny to listen to them but hard at the same time, because it’s the bitter truth about Lebanon.”