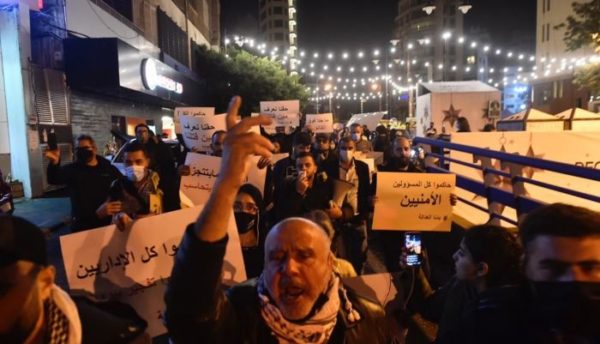 File Photo : Lebanese rallied outside Judge Fadi Sawwan’s house in Beirut after he halted the probe into the Beirut port explosion . They urged him to continue with his investigation until justice is served Dec 17, 2020
Share:

Scores of Lebanese rallied Thursday outside Judge Fadi Sawwan’s house in Beirut after he paused the probe into the Beirut port explosion for ten days.

The protesters urged Sawwan to keep up his investigation.

“Put on trial all the security officials,” one banner read. Another said: “It is our right to know who killed us.”

Local media also questioned the decision to halt the probe. LBCI TV said it was unnecessary, since the law gives Sawwan the right to continue his investigation until a court decision comes in.

Sawwan’s move comes following legal challenges to his authority by the same senior officials he accused of negligence that led to the blast, which killed over 200 people, injured more than 6,500 and destroyed parts of Beirut.

The legal battle has muddled the probe into what was one of the largest non-nuclear explosions in history, in a country where a culture of impunity has prevailed for decades. Many critics have seen it as an attempt by the political elite to prevent setting a precedent that might bring accountability to the highest level.

Caretaker Prime Minister Hassan Diab and two former ministers did not show up to a scheduled interrogation last week.

Then two of the accused former ministers, who are currently lawmakers in parliament, challenged Sawwan’s decision and asked the Court of Cassation to replace him, citing “legitimate suspicion” over its legality. The judge, and the Bar Association which represents the families, have 10 days to respond to the challenge. The court, the highest in the country, then decides on the matter.

Most of Lebanon’s political leadership and security agencies have said they knew of the stockpile of explosive chemicals that were stored at the port for over six years before they ignited on Aug. 4, causing the devastation. It remains unclear what sparked the ignition and why no one moved the stockpile from the waterfront overlooking a residential area and a cultural heartland of Beirut.

The families of the victims had welcomed the prosecutor’s decision, saying no senior official should be spared questioning.

The challenge to Sawwan’s summoning is apparently rooted in disparate interpretations over who has the authority to question ministers and heads of governments.

Sawwan initially sent a letter and documents to parliament last month, asking lawmakers to investigate his findings. According to Lebanon’s constitution, a separate council made up of judges and politicians, set up by parliament, is entrusted with trying ministers and premiers for crimes of high treason, dereliction of duties, and breach of the constitution — a body that has never been activated by parliament.

The parliament said it found nothing that could point to professional wrongdoing.

Legal experts said Sawwan then moved, based on a ruling by the Court of Cassation that allows him to investigate senior officials and refer them to regular courts on criminal charges, which include negligence leading to death.

He urged in a statement Judge Sawan to publish his testimony publicly :

“Today I call on Judge Sawwan to publish my testimony publicly and I tell Hezbollah not to think that it has managed to limit the probe into the crime of the century at the port to some officials who knew of the presence of the ammonium bomb but remained silent.”

“As I said in my testimony before Judicial Investigator Judge Fadi Sawwan, I reiterate that the ammonium nitrates were sent to Lebanon by the Iranian revolutionary guard for the benefit of Hezbollah,” Rifi said in his statement .

His statement came in response to a lawsuit filed against him by Hezbollah ’s Lawyers in connection with similar accusations he made in the wake of the blast.

In another related development Al Jadeed TV reported that president Michel Aoun , a key ally of Hezbollah has b been trying to influence the investigation , a charge Aoun’s presidential office denied