Iran on edge in final weeks of Trump administration 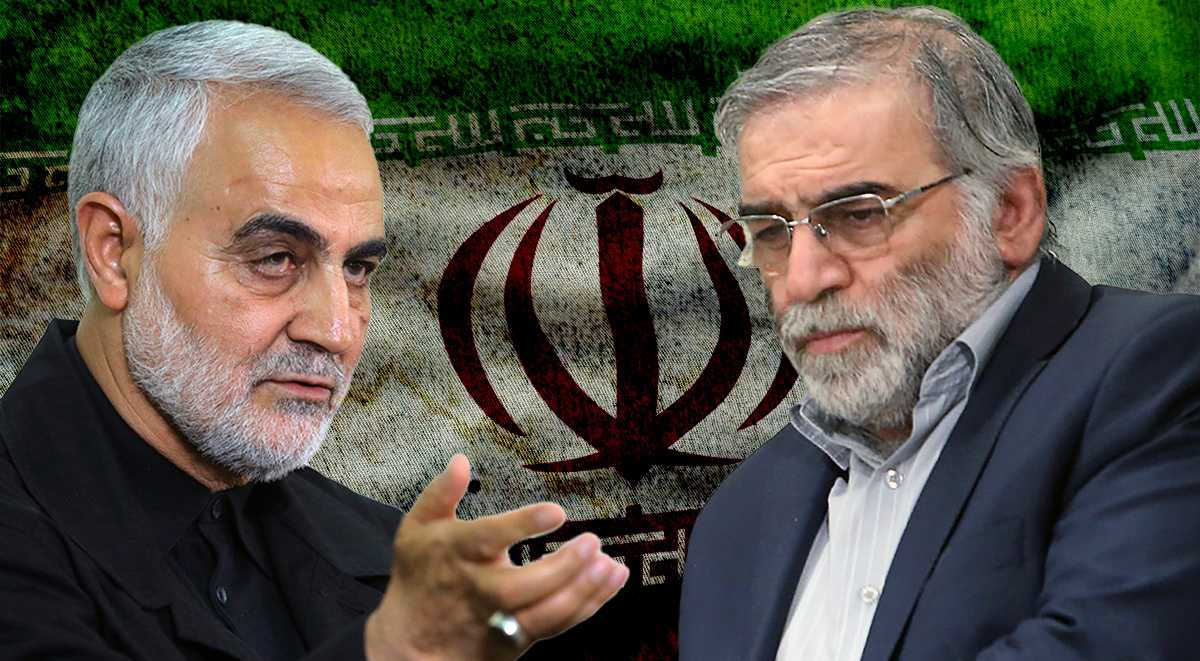 FILE PHOTO: Mohsen Fakhrizadeh (R) top Iranian nuclear scientist and Quds Force commander Qassem Soleimani. Both were assassinated in 2020. Iran is bracing itself for renewed attacks with five weeks to go before the Trump administration leaves office and as tensions rise in the region
Share:

Iran is bracing itself for renewed attacks with five weeks to go before the Trump administration leaves office and as tensions rise in the region following last month’s assassination of a top Iranian nuclear scientist on the outskirts of Tehran. Iran blames Israel for the killing of Mohsen Fakhrizadeh, who was believed to be the leading figure in developing Iran’s nuclear program and was reportedly targeted by the Israeli Mossad for years.

US Secretary of State Mike Pompeo is said to have received the green light from Donald Trump to escalate against Iran, short of starting a Third World War, according to US media. Pompeo lashed out at Iran last week following the Iranian parliament’s passing of a bill that suspends UN inspections and allows an increase in uranium enrichment levels in response to Fakhrizadeh’s killing. “The international community must not reward Iranian nuclear gamesmanship. The steps passed by Iran’s Majles, if implemented, would bring Iran to the dangerous 20% uranium enrichment level with no credible rationale for any peaceful purpose,” Pompeo tweeted on Friday.

However, Iranian President Hassan Rouhani has also expressed his opposition to the bill, saying it would be “harmful” to diplomatic efforts aimed at restoring the 2015 nuclear deal and easing US sanctions. A tug of war has been raging between hard-liners and the so-called reformists in Iran ahead of US President-elect Joe Biden’s inauguration on Jan. 20. Iran will hold presidential elections in June 2021, in which Rouhani will be challenged by a close aide to Supreme Leader Ali Khamenei.

Even before his election as president, Trump vowed to withdraw the US from the 2015 nuclear deal with Iran, which his predecessor Barack Obama had adopted. Trump did walk away from the deal, officially known as the Joint Comprehensive Plan of Action, in 2018 and applied a policy of “maximum pressure” on Tehran, with the hope of renegotiating the deal. Tough US sanctions have badly hurt the Iranian economy, but they have failed to bring the Iranians back to the negotiating table. The US policy divided the Europeans, while Russia and China took Tehran’s side.

Biden has promised to consult America’s European partners and seek ways to revive the nuclear deal, but not before adding some new conditions on Iran with regards to its controversial long-range missile program and its regional agenda. Rouhani last week called for Biden to re-enter the nuclear deal by reversing US sanctions. And Foreign Minister Javad Zarif last month asked the incoming Biden administration to make “three executive orders” to lift all sanctions imposed on Iran, adding that there is no need for “preconditions or negotiations.”

Israel under Prime Minister Benjamin Netanyahu had opposed the deal with Iran and last month, in an apparent message to Biden, the Israeli premier said: “There must be no return to the previous nuclear agreement. We must stick to an uncompromising policy to ensure that Iran does not develop nuclear weapons.” Netanyahu is not alone in objecting to the nuclear deal with Iran. A number of Gulf countries, some now with normalized ties with Israel, also see Iran’s nuclear program as a regional menace.

The feeling in Washington is that Trump may be ready to sabotage Biden’s efforts to reconnect with Iran. The killing of Fakhrizadeh, which was denounced by a number of Gulf states, was meant to provoke Iran into responding. Khamenei has vowed to avenge the killing, just as he did when Quds Force commander Qassem Soleimani was assassinated in Baghdad in January, but top military aides have stressed that Iran will choose the right time to respond.

Even the most extreme figures in Iran know that any provocative move against US targets in the region would trigger a sweeping American response. Last month, the US dispatched B-52 bombers to the region and deployed the aircraft carrier U.S.S. Nimitz to the Gulf just days before Fakhrizadeh’s assassination. The US Navy said at the time that the deployment was unrelated to specific threats. The Israeli military was also put on high alert last month, while news sources said this week that pro-Iranian militias in Iraq, Syria and Lebanon have been informed by Tehran to be ready for more Israeli hits in the final few weeks of the Trump administration.

With his failure to reverse the election outcome at home, Trump may resort to triggering a crisis abroad, thus leaving the new president with a foreign policy challenge ahead of his inauguration. And, with the first anniversary of Soleimani’s killing approaching, Tehran must find ways to restrain its militias in the region. The coming few weeks will be critical to the region, as any serious provocation may lead to a bloody confrontation.

• Osama Al-Sharif is a journalist and political commentator based in Amman. Twitter: @plato010