It’s time for the GOP to dump Trump | Opinion 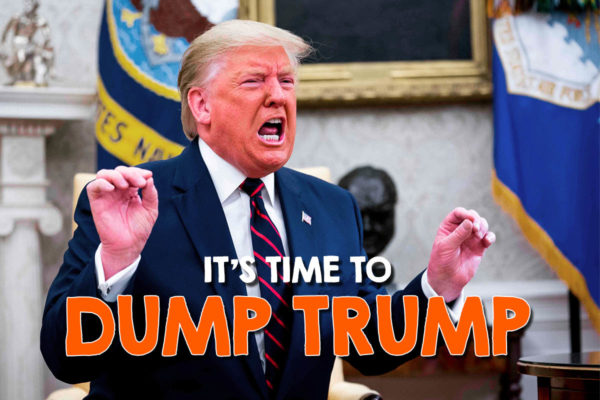 It’s decision time for GOP leaders. Will they continue to support Donald Trump, or will they dump him? They’ve faced this decision for several years, but current events put it in the sharpest relief so far.

Trump has repeatedly demonstrated his willingness and ability to do political damage to anyone who crosses him. Between the mean tweets and the name calling, there is ample evidence that anyone who defies him or simply contradicts his version of reality will be vilified to his considerable base of Republican supporters.https://f5434f71e99fa2f701a2536cf46e6a14.safeframe.googlesyndication.com/safeframe/1-0-37/html/container.html

Recent examples include Bill Barr and Brian Kemp, people who have been extraordinarily compliant to Trump in the past, but who have dared to speak the truth and do their duty.

Most Republican politicians fear they will face not only Trump’s wrath, but also a primary opponent if they dare to question the president in any way, and this has kept them from doing so.

It seems that many GOP politicians expect Trump to remain a powerful political force (not as president) and are not ready to speak truth to power. Some expect to benefit from that power; others are hoping that it fades away soon.

Let’s look at the other side of the equation.

It’s hard to believe that Trump could actually regain the presidency in 2024. He lost this time because a huge number of voters (81 million) couldn’t wait to get him out of office. And it isn’t going to get better. He won’t suddenly endear himself to the political center. His only talent is self-promotion; being outrageous and giving the middle finger to anyone and everyone. His most potent political message is one of division and resentment. Even if he escapes legal problems, Americans are, for the most part, extremely tired of his shenanigans.https://f5434f71e99fa2f701a2536cf46e6a14.safeframe.googlesyndication.com/safeframe/1-0-37/html/container.html

His lying about and mismanagement of the pandemic was the nail in a coffin that is getting bigger by the day. And he is putting a bow on that coffin by continuing with his ridiculous efforts to overturn Biden’s election instead of acting on the pandemic or the economic distress it is causing.

Even after losing close to 50 lawsuits concerning the presidential election, Trump hyped a lawsuit filed by the Attorney General of Texas seeking to overturn the results in four other states, including Pennsylvania. This Texas AG (who is likely seeking a Trump pardon for alleged federal crimes) has been joined by GOP AG’s from 17 other states in this frivolous lawsuit, as well as by 126 GOP members of the US House of Representatives.

This is nonsense, but dangerous nonsense, because it stirs the pot of insurrection and even moved Rush Limbaugh to start discussing secession.

That isn’t to say that Trump won’t run for president again, or at least say that he’s running again, as a way to hold his base. His claim that the election was stolen is about holding onto that base of true believers. It’s also a way to raise a lot of money (under false pretense) for future political purposes.

This presents an existential problem for the GOP. To the extent that Trump holds onto his base, that prevents anyone else emerging as the leader of the party and becoming a viable presidential candidate.

Staying in this abusive relationship with Trump has other problems. It means continuing to embrace the politics of division and resentment. It means not gaining ground with women or with expanding demographic groups. It means closer ties to the far-right media ecosystem with its wild conspiracy theories and lack of respect for the truth.

So, It’s time for GOP leaders to break up with Trump. It won’t be pretty, because of their enabling. For decades they have gone along with, or practiced, the politics of resentment. They have engaged in voter suppression. They have failed to stand up against the outlandish claims of the far-right media and wild conspiracies.

It won’t get better with time. Trump will take them farther down that rabbit hole. And there will be other rabbits to court Trump’s base, follow his approach and call themselves Republicans.If the GOP hopes to save the Republican legacy of a conservative party which promoted limited government, financial responsibility, and states’ rights, they will need to act soon, or it will surely be too late. It might be so already.

It couldn’t be clearer that Trump’s childish attempts to overturn the election are dangerous to our democracy. This should be at the top of the list of reasons to dump Trump now. The choice of so many GOP leaders not to acknowledge that Biden won the election demonstrates that many have little courage, or that they are willing to cheat to win. They’ve abdicated their responsibility to our country.

John Sigle is a retired professor at Dickinson College.