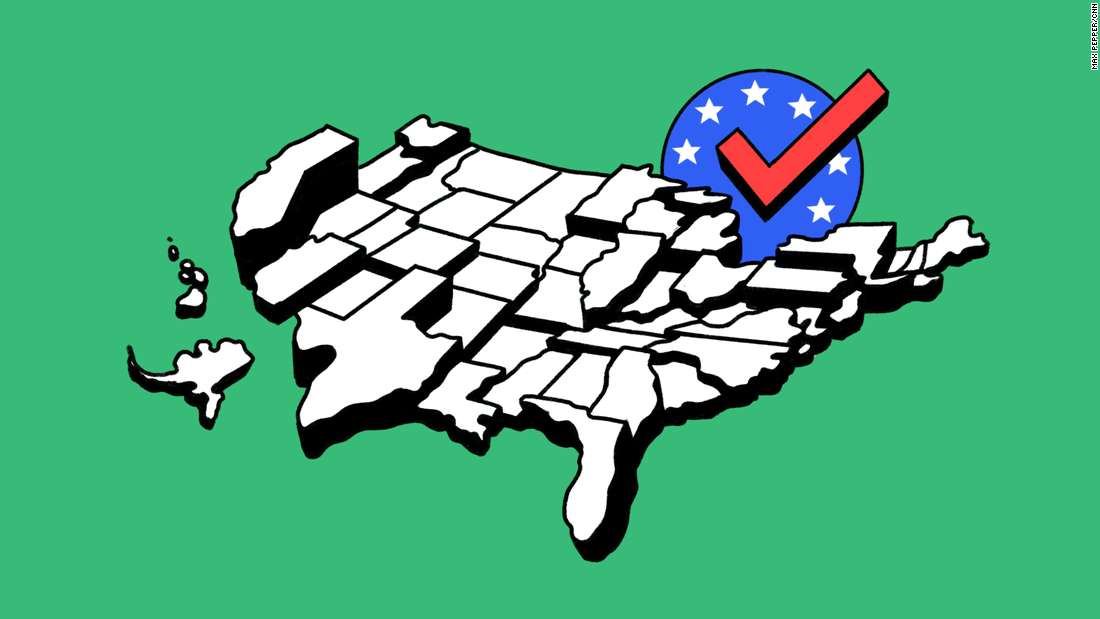 By Zachary B. Wolf

We’ve known for weeks that Joe Biden won the 2020 presidential election, but our horse-and-buggy Constitution, written in a time before instant communication, works very slowly.

Since Election Day on November 3, all 50 states and the District of Columbia have certified their votes and named slates of electors, who will meet on Monday to formally cast their ballots for President and Vice President — the next step in the process of finalizing Biden’s victory.

Those ballots will be sent to Washington, where they will be counted by Congress on January 6. Once that happens, Biden will be inaugurated the 46th President on January 20 at noon.

The system has been refined in the Constitution and detailed in US law over the last 200-plus years, but hasn’t seen a major overhaul since the 1870s, when the transcontinental railroad and the telegraph were on the cutting edge of technology and innovation.

Here’s a look at what will happen on Monday and why. Much of this refers to the very detailed website maintained by the National Archives and the Federal Register, which help states coordinate the process:

Why is this happening on Monday, December 14?

This is a complicated way of placing the two-step process of US presidential elections, general and electoral, in the early part of November and December, respectively, and giving new presidents enough time to get to Washington for inauguration in January.

The electors gather in their states and cast votes, individually and on paper ballots, for president and vice president.

The place in which they gather is different in each state, and often set in state law. In most states, it’s in the state capitol building or the governor’s office.

Voters voted November 3. What’s the point of this?

The Constitution is clear that electors, not voters, select the president and vice president. Monday is the day the electors officially cast their presidential votes, which are what get counted by Congress and technically elect the new president.

Who are these electors?

They were picked in the spring or summer by state parties. They’re often party bigwigs, like governors, or elder statespeople. Former President Bill Clinton and former Secretary of State Hillary Clinton are two of New York’s electors, for instance. Georgia’s Stacey Abrams is another. But most of these people you’ve never heard of.

How can I see the names of my electors?

After the election and before the Electoral College meets, each state is supposed to prepare certificates of ascertainment, an official document outlining the election result and the slate of electors. The National Archives posts them online.

Is there anything that requires electors to support the winner of their state?

Yes and no. There is nothing in the Constitution of federal law that requires an elector to support the candidate who won their state. But there are penalties in state law — fines, for instance. The Supreme Court recently upheld these faithless elector laws as constitutional in July. There were ten faithless electors after the 2016 election. The National Association of Secretaries of State maintains a database of faithless elector laws.

What actually happens when the electors meet?

It’s different in each state, and these meetings are scheduled to take place between 10 a.m. ET on the East Coast and 7 p.m. ET in Hawaii. The electors record their votes in writing and then count them. Then, they sign six copies of a Certificate of the Vote. The National Archives will post those Certificates of Vote when they receive them, but if you want to see what they look like, here’s Washington State’s from 2016, which reflects votes for Hillary Clinton, but also rogue votes for Colin Powell and Faith Spotted Eagle.

What if something happens to to an elector?

It’s sad but true that things happen. An elector from Massachusetts died recently, for instance. His vote will be declared “vacant” and replaced from a pool of alternates. In many states there are automatically alternate electors.

Why are there six copies of the results?

This is the 19th century version of a cc’ing different people on an email. According to the National Archives, the six copies go, by registered mail, to:

Will I be able to see this?

CNN is working to make sure as much of this process is visible as possible. Tune in to CNN and CNN.com.

Has Covid affected the process this year?

Is this the end of it?

No. The mail must transport the Certificates of Vote. Congress must count them. An inauguration must occur.

The USPS has until December 23 to deliver the certificates of vote to the Senate. Congress meets to count the electoral votes on January 6 (Vice President Pence will preside). The winner (Biden) is sworn in January 20.

Is Trump likely to accept the outcome after the electors meet?

Right now it does not seem like he will ever recognize the outcome of the election. He does not need to.

Is there any more room for Trump and Republicans to get in the way of the process?

Yes, a few. First, look for Republican lawmakers to raise objections during the counting of the votes January 6. If a member from the House and Senate both raise an objection, the two houses of Congress adjourn to their chambers to consider it. In 2016, Democrats in the House raised objections, but didn’t have a second from a senator. That seems more likely this year. Both houses would have to sustain the objection, which won’t happen with Democrats in charge of the House. So, the end result is still assured, but so is the forecast for drama.

Separately, the Supreme Court on Friday tossed out Texas’ attempt to void millions of votes in four states. The bid from Texas had been joined by Trump, 126 Republican members of Congress and more than a dozen GOP attorneys general.

Texas didn’t have the right to sue Georgia, Michigan, Pennsylvania and Wisconsin over their election rules and laws. Meaning the case was over and done.