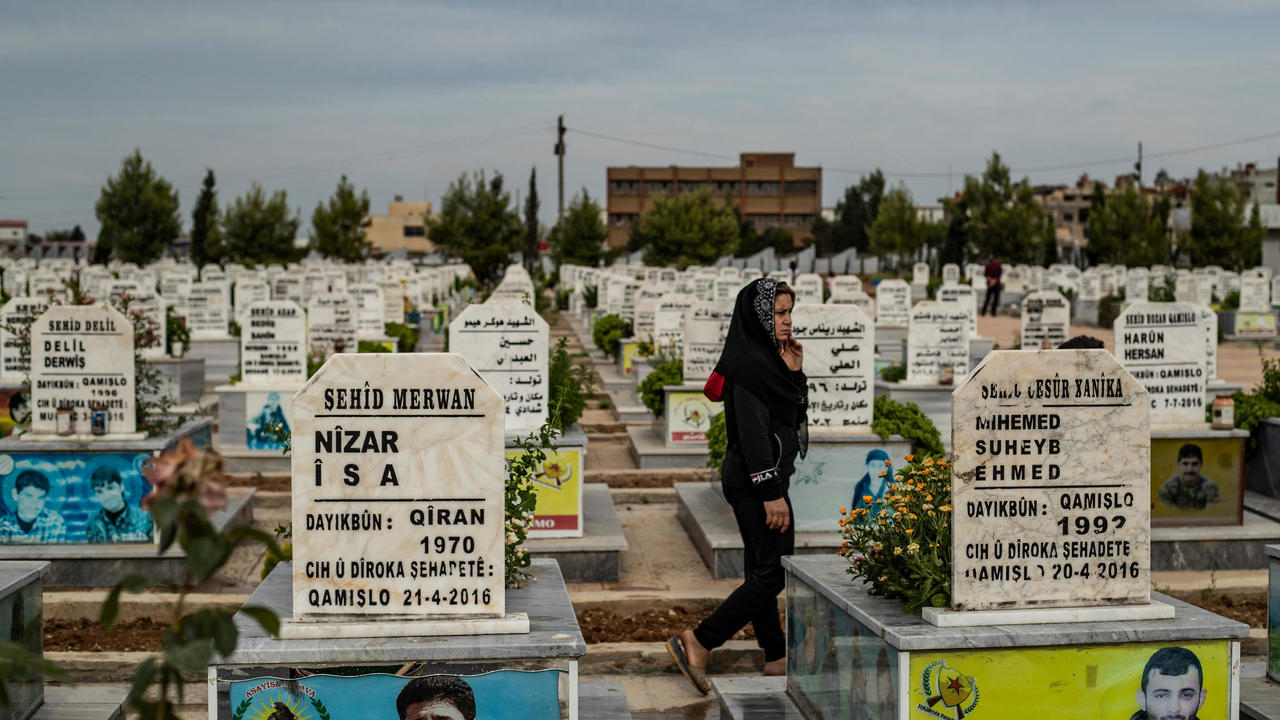 A woman visits the graves of slain Kurdish fighters at a cemetery in the Kurdish-majority city of Qamishli in northeastern Syria in May Delil SOULEIMAN AFP/File
Share:

The death toll for Syria’s civil war which started in 2011 is 387,000. The figure includes 117,000 civilians, 22,000 children, 130,500 pro-government fighters , 67,500 Islamic State fighters 57,000 non-jihadist rebel fighters, 12,500 Kurdish-led Syrian Democratic Forces fighters and 1703 fighters of the Iranian backed Lebanese Shiite militant group Hezbollah . This toll does not include some 88,000 people who died of torture in government-run prisons, nor thousands who were abducted during the conflict and are still missing. The total could very well be more than half a million. Some 6.7 million Syrians remained displaced inside the country, while 5.5 million are registered as refugees abroad, according to the United Nations.

Beirut – The overall death toll for Syria’s civil war has crept up to 387,000 following the least deadly of 10 years of conflict, a monitor said Wednesday.

The Syrian Observatory for Human Rights, which relies on a wide network of sources inside Syria, said the new figure included almost 117,000 civilians, among them more than 22,000 children.

The Observatory’s previous tally was issued in January and stood at more than 380,000.

The fighting, which erupted in 2011 after the brutal repression of anti-government protests, has largely abated this year as a ceasefire held in northwestern Syria and attention turned to containing the coronavirus pandemic.

The latest toll included more than 130,500 pro-government fighters, among them foreigners.

More than half of those were Syrian soldiers, while 1,703 were from the Lebanese Shiite group Hezbollah whose members have been fighting in Syria since 2013.

The conflict has claimed the lives of more than 57,000 non-jihadist rebel fighters.

It has also killed more than 67,500 jihadists, mainly from the Islamic State group and Hayat Tahrir al-Sham (HTS), a group dominated by ex-members of Syria’s former Al-Qaeda affiliate.

More than 12,500 Kurdish-led Syrian Democratic Forces fighters have been killed in battles against IS and Turkish forces.

The Observatory’s toll does not include some 88,000 people it says died of torture in government-run prisons, nor thousands who were abducted during the conflict and are still missing.

After turning the tide of the war with Russian and Iranian support since 2015, the Syrian government now controls around two-thirds of the country.

Among the regions still beyond its reach are the last rebel enclave of Idlib in the northwest, Turkish-held areas along the northern border, and northeastern parts of the country held by US-backed Kurdish forces.

The war has forced more than half the country’s pre-war population to flee their homes.

Some 6.7 million Syrians remained displaced inside the country, while 5.5 million are registered as refugees abroad, according to the United Nations.