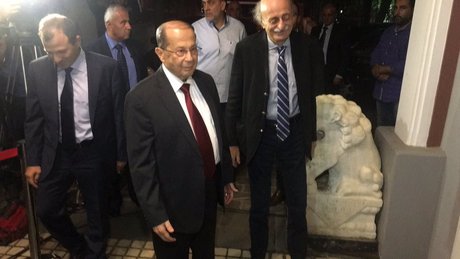 The leader of the Progressive Socialist Party, former MP Walid Jumblatt, said on the occasion marking 103rd birthday of of his slain father Kamal Jumblatt (who was assassinated in 1977 by the Syrian regime) . I cannot say it directly this is why I urge Patriarch Boutros al Rai , Lebanese Forces leader Samir Geagea and Marada Movement leader to call for the resignation of President Michel Aoun.

He explained that he could not say the word resignation due to the sensitivity of the matter .The president in Lebanon should be a Maronite Christian . All the 3 leaders he listed are Maronites . This is reportedly what he meant by the word sensitivity .

Many protesters say Aoun is still ruling like the general he was in Lebanon’s civil war—uncompromising and dismissive of the protesters’ demands—rather than like an elected representative. And even among those that supported him for decades, there is now resentment about his political shape-shifting and lack of achievements as president. Aoun, who commanded troops in Lebanon’s divided army during the civil war, participating in some of the worst fighting of the conflict, invokes his military service as a positive.

One protester commented about Aoun’s past history:

“He started a war with Syria, and he ran away,” said one of the protesters , who accused Aoun of stealing money from the Lebanese treasury to fund his 14-year exile in France. “Where did you get the money from? Were you working in Paris making croissants? No.”

Aoun was smuggled out of Lebanon by the French in 1991 after he fled to the French embassy following his defeat by the Syrian army . While in exile he continued to criticize the Syrian presence in Lebanon.

He returned just days after the last Syrian tanks left the country in 2005, amid massive anti-Syrian protests by the so called Cedar Revolution , spurred by the assassination of former Prime Minister Rafik Hariri. Tens of thousands of supporters flooded the streets, giving Aoun a hero’s welcome to a freshly liberated Lebanon. He stood in front of a sea of Lebanese flags in Beirut’s central Martyrs’ Square.“I return to you today, and Lebanon has regained its freedom, sovereignty, and independence,” he told the crowd from behind a sheet of bulletproof glass.

“We felt betrayed,” said one of the protesters , who was protesting against Aoun last November . “Aoun used to say, ‘We want only the Lebanese Army in the south. We don’t want any militias. We only want the army to have  weapons.’ Everything he said before, he did the opposite.”

“Hezbollah cannot flex their muscle here without this Christian cover,” he said “He gave them whatever they wanted, and they gave him whatever he wanted … and we got screwed.” He added

Protesters say it’s not just the ideological flip-flopping at issue; it’s the broken promise of a better life for Lebanese citizens.

“He promised a cleaner country, rules, electricity,” one protesters said. “The pollution is worse, the garbage is worse, the politicians are worse, the corruption rampant.”

When Aoun spoke in November 2019 after almost a month of anti-government demonstrations, he told the protesters: “If people aren’t satisfied with any of the decent leaders, let them emigrate.”

It was under Aoun that Lebanon defaulted for the first time in history on its debt .

It was under Aoun the Beirut Port exploded , killed 200 people , injured another 6500 , destroyed a huge section of Beirut and left 300, 000 homeless.

It was under Aoun that Lebanon is witnessing mass emigration and brain drain . About 380,000 Lebanese reportedly departed their home country during the last 12 months .

It was under Aoun that Lebanon has become a Colony of Iran and run by Hezbollah chief Hassan Nasrallah .

Aoun has become a figurehead in Lebanon . All the power is in Nasrallah’s hand

Nasrallah controls the presidency because of Aoun

Nasrallah controls the Government . He picked the current caretaker PM Hassan Diab whose government is referred to as Hezbollah government

He controls the parliament through his Shiite ally Speaker Nabih Berri

In short , Iran controls all the branches of government through Hezbollah

One analyst commented on Jumblatt’s call for Aoun’s resignation:

“Jumblatt is right , there may not be a Lebanon or any Lebanese left in the country if we wait for Aoun to complete his term” adding” this is by far the worst regime in Lebanon’s history ”