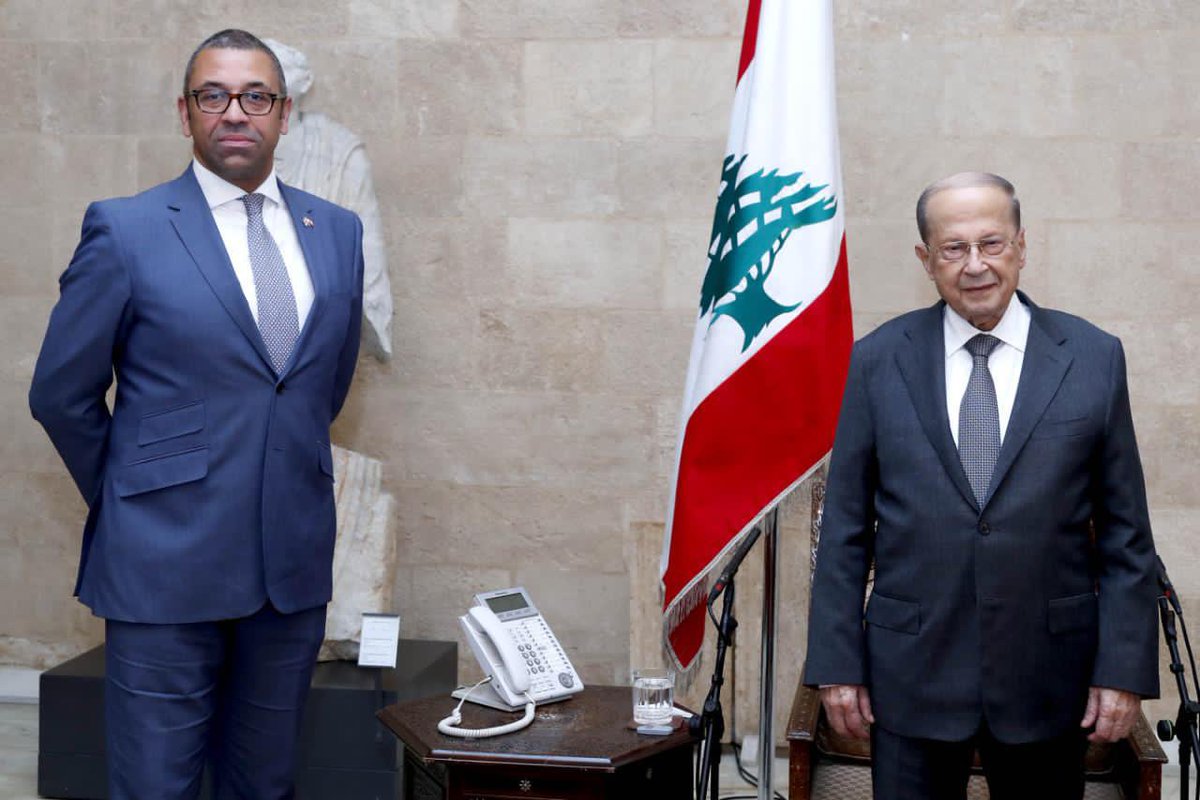 James Cleverly, the British Foreign Office minister for the Middle East is shown with Lebanon president Michel Aoun at Baabda palace on Thursday Dec3, 2020 . Cleverly warned Thursday after meeting with Aoun that hunger threatens Lebanon if its leaders don’t act on reforms. Aoun and his allies are reportedly behind the delay in forming a government by experts to deal with reforms
Share:

BEIRUT – Lebanon is on the verge of not being able to feed itself, a British minister warned on Thursday, as the country’s financial crisis hikes poverty and inflation.

James Cleverly, the Foreign Office minister for the Middle East, called it “a man-made problem which could have been prevented”, joining a chorus of voices who have blamed Lebanon’s ruling elite for failing to chart a path out of the crisis.

Since last year, the unprecedented meltdown has crashed the currency and wiped out jobs. Photos of people rummaging through dumpsters or selling their belongings online for food have circulated widely in recent months.

A COVID-19 spike and a massive port blast that killed around 200 people in August have compounded their woes.

🔴Four months on from the blast, Lebanon is threatened by a silent tsunami. Lebanon’s leaders must act🔴

'Lebanon’s people, and all others who call Lebanon home, deserve better. The alternative will be horrific.'

“The most pressing danger is the risk to food security: Lebanon is on the verge of not being able to feed itself,” Cleverly, who met Lebanese officials in Beirut on Thursday, said in a statement.

“Four months on from the blast, Lebanon is threatened by a silent tsunami. Lebanon’s leaders must act.”

Comments about a looming end to subsidies, which have depleted already critical foreign currency reserves, have raised fears of shortages. Lebanon imports lots – including much of its domestic wheat consumption – and produces little.

Lebanon’s central bank and government have traded blame over the crisis. The bank can only maintain basic subsidies for two more months and the state should come up with a plan, Governor Riad Salameh said on Tuesday.

Caretaker Prime Minister Hassan Diab has said lifting subsidies on vital goods without helping the poor could cause “a social explosion”.

Cleverly said any end to subsidies would make things worse. “I reiterate my call to the leaders of Lebanon to do what is needed and deliver reforms,” he said. “The alternative will be horrific.”