Biden asks Fauci to join his coronavirus team as US daily deaths top 3,000 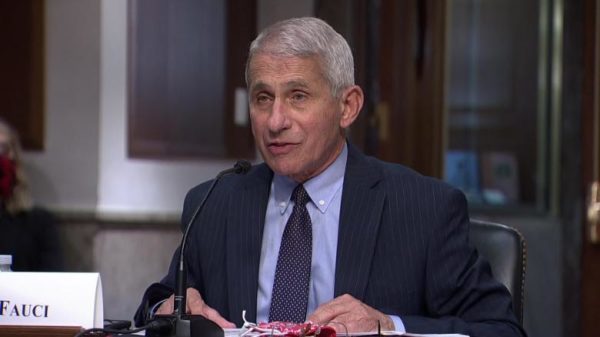 Joe Biden has asked top US infectious disease expert Anthony Fauci serve as his chief medical adviser and to join the new administration’s Covid-19 team after the president-elect takes office on January 20.

The decision comes as total infections in the US surge past 14 million, with daily deaths at a record high.

Fauci, the director of the National Institute of Allergy and Infectious Diseases, spoke to Biden and his team preparing to deal with the virus on Thursday, Biden said in an interview with CNN.

“I asked him to stay on in the exact same role as he’s had for the past several presidents, and I asked him to be a chief medical adviser for me as well and be part of the Covid[-19] team,” Biden said.

Biden also said he would get the Covid-19 vaccine when Fauci says it is safe and would be happy to take it publicly.

“It’s important to communicate to the American people it’s safe, to do this,” he said.

Despite news that vaccines against the virus may begin to be distributed in the coming weeks, the US is experiencing a new surge in hospitalisations and deaths.

The US reported 3,157 deaths on Wednesday, according to the tally kept by Johns Hopkins University – more than the number of people killed on 9/11. The figure shattered the old mark of 2,603, set on April 15, when the New York metropolitan area was the epicentre of the US outbreak.

The number of Americans in hospital with the virus has eclipsed 100,000 for the first time, and new cases have begun topping 200,000 a day, according to figures released on Thursday.

Biden told CNN that once in office he would issue a standing order that Americans must wear masks in federal buildings and on interstate transport such as planes and buses.

The president-elect is also poised to pick former Obama official Jeff Zients as the incoming administration’s coronavirus “tsar”, according to a Biden ally familiar with internal discussions.

A Politico report on Thursday said Zients had officially been chosen for the role and that another candidate, Vivek Murthy, the former US surgeon general who has been one of Biden’s top coronavirus advisers, will return to his old role in Biden’s administration but with a broader mandate that includes a heavy focus on the pandemic.

A Biden transition spokesman did not respond to a request for comment on Zients’ or Murthy’s roles.

Biden has made fighting the intensifying pandemic his top priority, after a campaign in which he regularly slammed President Donald Trump’s handling of the crisis.

But there was little federal coordination in fighting the pandemic and Trump often undermined the public health advice of his own experts.

In addition to confronting the disease’s spread after Biden is sworn in on January 20, Zients will oversee a mammoth and unprecedented operation to distribute hundreds of millions of doses of new vaccines, coordinating efforts across multiple federal agencies.

The US roll-out of the first vaccines may begin this month, but it could be months before they are widely available.

Zients, a wealthy businessman who has moved between the public sector and corporate America, has played a central role in the transition since Biden beat Trump in the November 3 election.

In recent weeks, Zients has also served as a pandemic liaison of sorts with governors and state officials, frequently joining calls to share data and discuss concerns, according to two people familiar with the calls.

He and other Biden officials have emphasised stepping up deliveries of personal protective equipment and increasing testing, while expressing sympathy for the financial burden the massive vaccine roll-out will impose on already strained state budgets, the sources said.

“Zients has been impressive,” said one state Democratic official who has taken part in the calls. “If the people currently involved in the transition are involved come January, I think we are in good hands.”

Zients’ corporate background, however, has concerned some liberal groups that question whether he would be too business-friendly.

“The Covid[-19] tsar will have to make decisions on just how deferential to business to be,” said Jeff Hauser, head of the Revolving Door Project, a watchdog group that scrutinises executive branch appointees for their corporate ties.

As part of his preparation for the role, Zients has been on conference calls with staff from the US Department of Health and Human Services (HHS), one of the sources said.

He is a member of the transition’s agency review teams examining the work under way at the Defence, HHS and Homeland Security departments, all of which will be involved in the vaccine roll-out.

While Zients is not a long-time member of Biden’s inner circle, his selection as coronavirus tsar continues Biden’s pattern of turning to former Obama hands to staff many senior roles.

A health care consulting executive earlier in his career, Zients served in the Office of Management and Budget in the Obama administration before being appointed to lead the National Economic Council, which advises the president on economic policy.

Obama also tapped Zients to fix the roll-out of his health care plan, which was marred by the breakdown of the government website where people signed up for insurance.

“Everybody kind of sees him as just a good manager,” a Biden adviser said.

After Obama left office, Zients became chief executive of the Cranemere Group, a multibillion-dollar firm that acquires businesses, and served on Facebook Inc’s board until this year. He is on leave from Cranemere.

Zients, one of several co-chairs of the transition announced in the autumn, also served as one of the Biden campaign’s major fundraisers.

In November 2019, when the campaign was spending more than it was taking in and trailing rivals such as Senator Bernie Sanders, Zients and his wife, Mary, hosted a fundraiser at their Washington home.

In addition to collecting much-needed money, the event attracted more than 50 former Obama administration officials and helped improve the mood of the campaign, according to a person involved in the gathering.

Antony Blinken and Alejandro Mayorkas, now Biden’s nominees for secretary of state and homeland security chief, respectively, were among the guests at the party.