Hezbollah’s Nasrallah to move to Iran amid regional tensions – 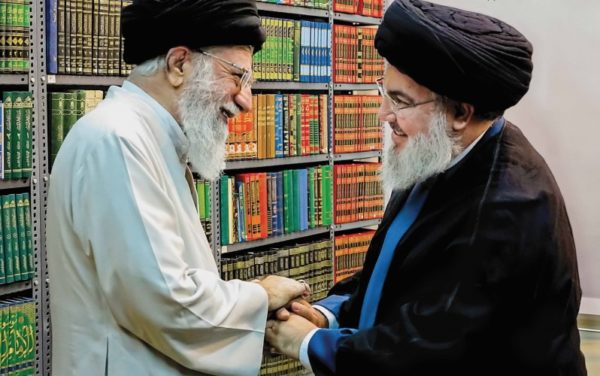 According to the report by Kuwaiti Al-Jarida newspaper , Nasrallah is meant to stay in Tehran for an indefinite period and it is unclear when exactly he will return to Lebanon.

Hezbollah Secretary-General Hassan  Nasrallah  plans to move to Iran and may have already made the move, an informed source told the Kuwaiti Al-Jarida newspaper Wednesday.The source told Al-Jarida that intelligence services in Lebanon and neighboring countries have monitored extensive encrypted communications between the Iranian Revolutionary Guards Corps and Hezbollah concerning the move. Nasrallah is meant to stay in Tehran for an indefinite amount of time and it is unclear when exactly he will return to Lebanon.

The move to Iran comes after the recent assassination of Iranian nuclear scientist Mohsen Fakhrizadeh just east of Tehran. Tensions have risen in the region as Iranian officials blame Israel and threaten revenge.Tensions have also been high in recent months between Hezbollah and Israel, after a Hezbollah fighter was killed in an Israeli airstrike in Damascus in July.

Hezbollah threatened revenge and the IDF has been on alert along the borders with Lebanon and Syria since.The Kuwaiti newspaper reported in November that a source close to the commander of the IRGC Quds Force, Esmail Qaani, had stated that Hezbollah had managed to uncover an operation planned by Israel to assassinate Nasrallah and a number of leaders in pro-Iranian factions in Syria, Iraq and the West Bank and Gaza Strip.

“Ghaani, who succeeded General Qassem Soleimani , (who was assassinated by the US in Iraq earlier this year) as the head of the Quds Force, the elite unit of Iranian Revolutionary Guards in charge of foreign operations, has paid a secret visit to the southern suburbs of Beirut in recent days and has spoken with Nasrallah and other political and military officials of the party,” Lebanon’s French-language daily L’Orient-Le Jour reported.

“The Iranian official stressed the need to remain on alert for any eventuality, while telling his contacts that it was necessary to avoid any action that could be seen as escalation and exploited by Israel to launch a major operation,” the daily added.

The Associated Press reported that 2 senior Iraqi Shiite politicians recently said that Ghaani had visited Iraq in recent weeks to tell Iranian-backed Iraqi militia factions and Shiite politicians to avoid provoking tensions with the U.S. that could give an outgoing Trump administration cause to launch attacks in the U.S. president’s final weeks in office.

Around that same time, Nasrallah himself warned followers and allies to be vigilant during Trump’s remaining time in power.

“All of us … should be on high alert in these next two months so that it passes peacefully,” Nasrallah said in televised remarks earlier this month and urged followers to “be prepared to face any danger, aggression or harm” and to respond in kind “if the U.S. or Israel’s follies go that far.”