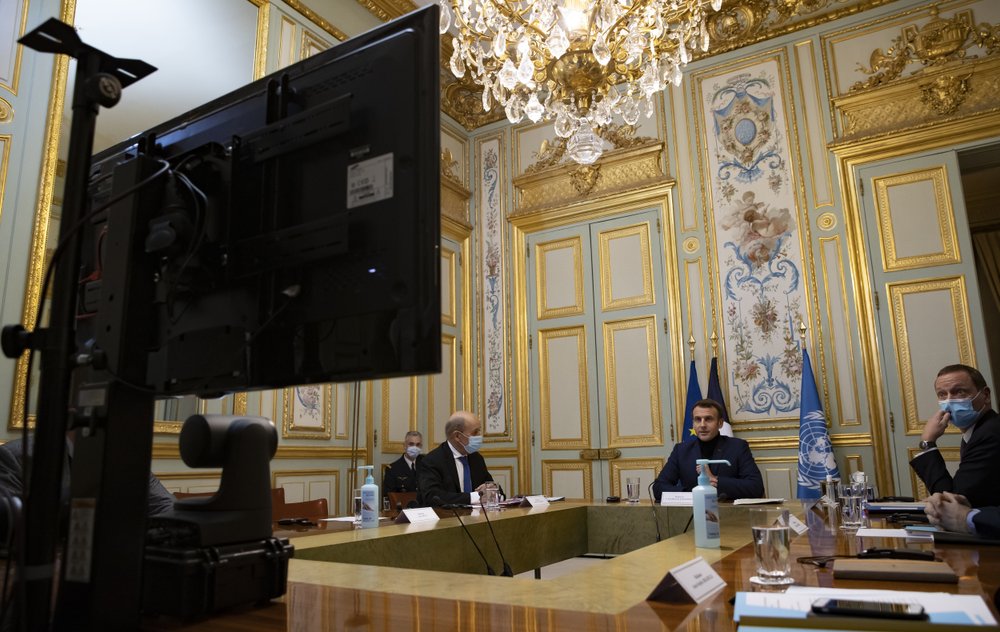 French President Emmanuel Macron, second from right, makes introductory remarks during a visio-conference meeting about support and aid for Lebanon, at the Elysee Palace in Paris, France, Wednesday, Dec. 2, 2020. France is hosting an international video conference on humanitarian aid for Lebanon amid political deadlock in Beirut that has blocked billions of dollars in assistance for the cash-strapped country. (Ian Langsdon, Pool via AP)
Share:

By ZEINA KARAM and SYLVIE CORBET

France and the United Nations vowed Wednesday to keep providing humanitarian aid to Lebanon but urged the country’s leaders to form a new government as a political deadlock in Beirut has blocked billions of dollars in assistance for the cash-strapped country hit by multiple crises.

A meeting organized via videoconference by the U.N. and France was the second since the disastrous Aug. 4 explosion that destroyed Beirut’s port and wrecked large parts of the capital. The blast, which killed over 200 people and wounded thousands, was caused by the detonation of nearly 3,000 tons of ammonium nitrates that had been stored unsafely at a port warehouse for years.

The explosion came amid an unprecedented financial meltdown — worsened by pandemic-related closures — that has brought soaring inflation, poverty and unemployment.

French President Emmanuel Macron and U.N. Secretary-General Antonio Guterres announced the creation of a fund handled by the World Bank, the U.N. and the European Union to provide support for Lebanon, including food, healthcare, education and the reconstruction of the Port of Beirut.

“We can, together, help the Lebanese people move beyond the emergency phase and onto the path for longer-term recovery and reconstruction,” Guterres said.

The plan also calls for “a targeted set of reforms, which are essential to facilitate recovery and reconstruction,” he added.

Macron said Wednesday’s conference would “make it possible to complete the emergency response and provide an early recovery response.”

But the French leader warned that the promised aid “won’t replace the commitment of Lebanese political forces and institutions to form a government as quickly as possible and implement a roadmap for reforms without which the (long-term) international economic help won’t be released.”

In a dire report published Tuesday, the World Bank said Lebanon’s economy faces an “arduous and prolonged depression,” with real GPD projected to plunge by nearly 20% because its politicians refuse to implement reforms that would speed up the country’s recovery.

Macron, whose country once governed Lebanon as a protectorate, supported pushing ahead with an aid program despite frustration with the Lebanese ruling class. Lebanon’s leaders continue to resist reforms and have been unable to form a government after the last one resigned in the wake of the explosion.

“Commitments have not been met,” Macron said.

Representatives from 27 countries participated in Wednesday’s meeting, including 12 heads of state and local Lebanese aid groups which have a central role as trusted partners, according to the French presidency.

A new government would be the first step toward implementing a French roadmap for reforms to enable the release of billions of dollars of international aid. Another key international demand is a Central Bank audit. U.S. consultancy firm Alvarez & Marsal withdrew last month from a forensic audit it was tasked with, saying it had not received the information required to carry out its work.

Lebanese President Michel Aoun said that “despite the obstacles facing the French initiative, it must succeed because the crises the country is facing have reached their maximum.”

“I am determined, no matter what it costs, to follow through with the financial audit to the end to liberate the state from the corrupt economic, political and administrative systems to which it has become hostage,” he added.

Aoun said Lebanon is negotiating a $246 million loan from the World Bank to deal with the economic fallout of the coronavirus pandemic and Lebanon’s emergency needs. The talks end this week.

The Aug. 4 explosion, widely blamed on the negligence of Lebanese politicians and security agencies, has brought world attention to the corruption that has plagued the country for decades and left it on the brink of bankruptcy with hollowed out institutions.

World leaders and international organizations pledged nearly $300 million in emergency humanitarian aid after the blast but warned that no money for rebuilding the capital will be made available until Lebanese authorities commit themselves to serious political and economic reforms.

The donors pledged the aid will be coordinated by the U.N. and delivered directly to the Lebanese people, in a clear rebuke of the country’s entrenched and notoriously corrupt leaders.

The aid money is expected to go directly to NGOs and other organizations to distribute to the public, bypassing the Lebanese government.

Participants to the conference said in a final statement that the reconstruction of the Beirut port should be based on the principles of “build back better, manage better, and decide in a transparent manner.”

They reiterated the call for “the formation of a credible government, effective and able to work in the general interest of the country.”