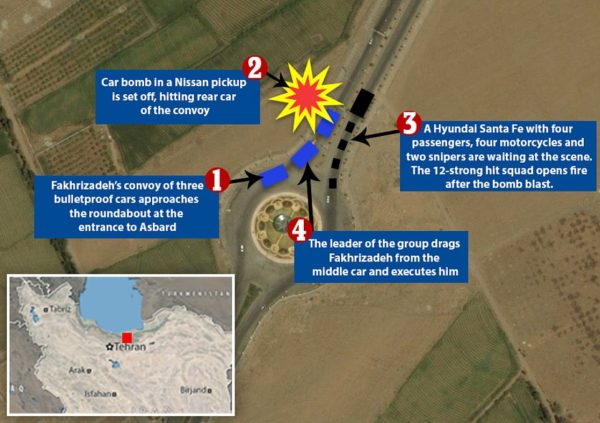 Remarkable detail of the elaborate plot to assassinate ‘prominent and distinguished’ Iranian nuclear scientist Fakhrizadeh has been leaked (pictured) – as the rogue nation claim Israel is behind the hit
Share:

Conservatives and hardliners in the parliament are gearing up to revitalise Iran’s nuclear programme after scientist’s assassination.

Tehran -Following the assassination of a top nuclear scientist near Tehran, Iran’s conservative parliament has called for a halt to international inspections of the country’s nuclear facilities as a proportionate response to the killing.

In a statement signed by all members of parliament, the legislative body said on Sunday “the hand of the murderous Zionist regime” can be clearly seen in the assassination of top scientist Mohsen Fakhrizadeh, who was killed after an explosion and ensuing gunfire on Friday.

According to the lawmakers’ statement, what has emboldened Israel to take this step is a “damaging way of thinking among some government members” who believe negotiating with the West would transform Iran into a “normal” state in its eyes, and Iran must therefore refrain from antagonising it.

“But the experiences of terror and sabotage of the US, Israel and their other allies in the country in recent years, which have unfortunately gone largely without proportionate response, have shown how wrong and dangerous this way of thinking is,” the statement said.

The statement, read out at a public session, added that this way of thinking has emboldened rivals, plunging the country into tensions unprecedented since the eight-year Iran-Iraq War that ended in 1988.

Members of parliament called for an “immediate and punitive response” to foreign acts of aggression, the best of which would be to “revive the brilliant nuclear industry of our country”.

As per a landmark 2015 nuclear deal, Iran agreed to significantly curb its nuclear programme in exchange for the lifting of multilateral sanctions and provided access to IAEA inspectors that continues to date.

The Additional Protocol is not a stand-alone agreement but includes voluntary measures that boost the IAEA’s ability to verify the peaceful use of all nuclear materials in a country.

Iran has long maintained that its nuclear programme is peaceful.

Exactly one year after the US withdrew from the nuclear deal and embarked on its increasingly intensive “maximum pressure” campaign of sanctions in May 2018, the administration of President Hassan Rouhani started gradually scaling back Iran’s nuclear commitments, saying the steps were reversible.

But ever since US President Donald Trump’s unilateral withdrawal, conservatives and hardliners have pushed to return Iran’s nuclear programme to the level it was at before the nuclear deal.

They were strengthened when they swept an overwhelming majority of parliament seats after elections in February that saw the lowest voter turnout in the four-decade history of the Islamic Republic.

Sunday’s statement creates no legal obligation for the government and Iran’s Atomic Energy Organization, but members of parliament are finalising a bill to create that obligation.

Called the Strategic Act to Revoke Sanctions, the bill creates the grounds for implementation of all the demands in the lawmakers’ statement.

nization of Iran to annually produce at least 120 kilogrammes (about 265 pounds) of 20-percent enriched uranium, revitalise the Fordow plant, and increase the number of advanced centrifuges, among other things.

The parliament on Sunday agreed to accelerate the bill, which is expected to undergo further reviews later this week. It must be approved the Guardian Council – a powerful 12-member vetting body that reviews all legislation approved by parliament

‘No signal of weakness or trust’

In a speech in parliament on Sunday, speaker Mohammad Bagher Ghalibaf said the Iranian people have experienced many losses like Fakhrizadeh’s assassination, but have persevered.

“This time too, they will prove to enemies that the martyrdom of Dr Mohsen Fakhrizadeh will open a new window for the country’s progress and make these shameful terrorists and their supporters regretful,” he said.

The politician, who ran against Rouhani in the 2017 presidential elections and is thought to be a potential candidate in next year’s race, said the only way to deter future attacks is to show a “strong reaction”.

All forces and organisations in Iran must refrain from sending “any signals indicating weakness or trust to the US political system”, he said.

The escalation comes weeks before Trump has to leave the White House after losing the presidential elections to rival Joe Biden, who has promised to reverse his hardline campaign on Iran.