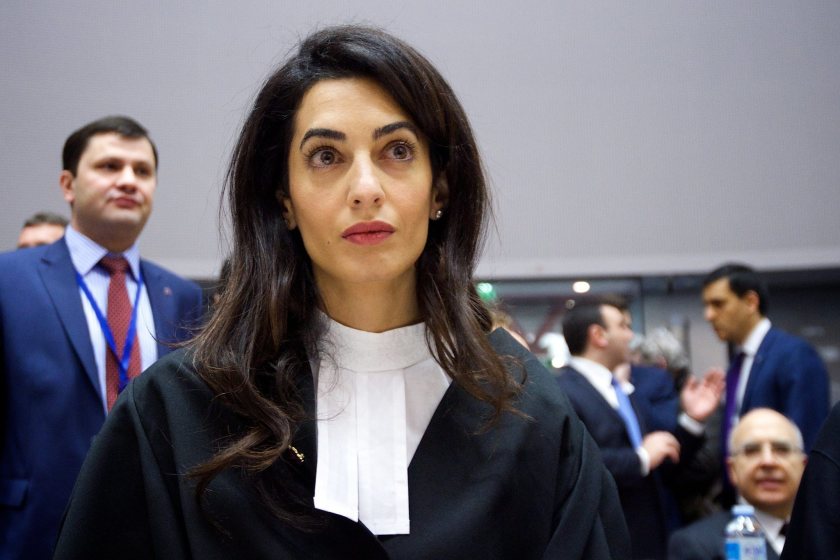 Lawyer Amal Alamuddin Clooney attending the hearing in the case Perincek vs Switzerland, at the European Court of Human Rights in Strasbourg, France. (Candice Imbert / Council of Europe / EPA)
Share:

A petition on change .com is urging Amal Clooney to take Lebanese politicians t to justice at the International Criminal Court (ICC).

Leen Nicole Masri  who’s started this petition to Amal Clooney set a target of 25,000 signatures which will be met within minutes and expected to hit over a million in no time

“I’m signing this petition because we want to get rid of corruption .“

“Our people deserve to live in dignity! And its corrupt leader to be in Prison where they belong!“

“Enough corruption, enough lies, enough theft, all means all from the top of the pyramid to the base of it. Take them to trial and make them face their own crimes. And save our sacred beautiful Lebanon from these criminals.”

“I am signing this petition because the lebanese government has frozen and stolen my saving account being the net savings after my 40 years of hard work.“

“Justice should be served“

Amal Clooney Alamuddin is a Lebanese-British barrister at Doughty Street Chambers, specialising in international law and human rights. Her clients include Julian Assange, the founder of WikiLeaks, in his fight against extradition; the former prime minister of Ukraine, Yulia Tymoshenko;  Egyptian-Canadian journalist Mohamed Fahmy; and Nobel Prize laureate Nadia Murad.

In 2019, she was appointed as the special envoy on media freedom by the British Foreign and Commonwealth Office .

Actress Meryl Streep, who presented Clooney with the award ” said Clooney exemplifies the tireless struggle for press freedom and justice. ” Adding “She’s not only something every journalist needs, which is a great lawyer, but she’s also a defender of the international laws that make free expression possible.”

‘My name means hope’: Clooney said when she accepted the award for defending journalists

George and Amal Clooney pledged $100,000 for Beirut relief following the August 4 explosion of the port : They “hope that others will help”,

Update by Ya Libnan Editor : just over 20, 000 have already signed the petition . At least 25,000 signatures are required . We at Ya Libnan urge our readers to sign the petition. This is extremely important if we want to get rid of corruption in Lebanon and get our stolen money back.

Can you for a moment imagine the reaction of the politicians in Lebanon if Amal Clooney decides to handle this case.

Please make that important decision of your future , your family’s future and the future of Lebanon and :

Click here to sign: Petition for Amal Clooney to bring the Lebanese Gov. to the International Criminal court