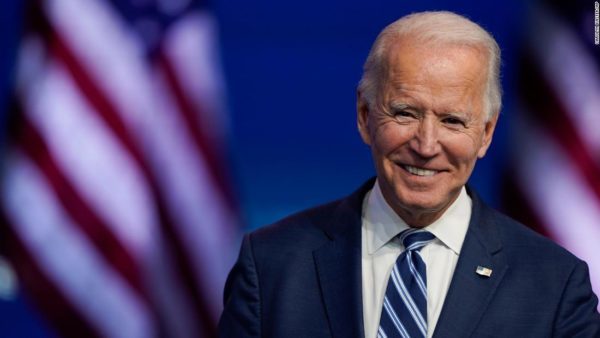 File photo: President-elect Joe Biden . The European Union’s top officials expressed relief that they would again have a friend in the White House as Joe Biden replaces Donald Trump.
Share:

Republicans are concerned that President Donald Trump’s refusal to concede the presidential election to Democrat Joe Biden could have negative consequences in the battle over control the Senate, Axios’ co-founder Mike Allen told CNBC on Friday.

“The conversations I have, Republicans are very worried that this foot dragging is going to hurt the real next fight,” Allen said in a “Squawk Box” interview. Instead, Allen added, they want to “keep the eye on the prize, which is the two Georgia runoffs on Jan. 5.”

Republicans hold a 50-48 seat advantage in the Senate, according to NBC News projections. The two openings are in Georgia, where the race between GOP Sen. Kelly Loeffler and Democrat Raphael Warnock is going to a runoff on Jan. 5, because neither candidate secured 50% of the vote in last week’s general election. Republican Sen. David Perdue and Democratic challenger Jon Ossoff also look like they are headed to a runoff, but NBC News has yet to make an official call.

The races carry significant implications for policymaking in Washington because two Democratic victories would give the party control of the Senate — along with the House and presidency. Republican pollster Frank Luntz told CNBC earlier this week that they are “the most important Senate elections in modern times.”

Trump has yet to concede the presidential election to Biden, after various media organizations, including NBC News, projected the Democrat as the winner on Saturday. Trump’s campaign has been pursuing a flurry of lawsuits in states related to the voting process or the vote counting. Additionally, despite the president’s baseless claims, there is no evidence that widespread voter fraud occurred to advantage Biden.

A GOP victory in only of those contests, Allen noted, would mean that Republicans would hold onto their Senate majority. Should Democrats win both Georgia seats, splitting the Senate down the middle, Vice President-elect Kamala Harris would end up holding the tie-breaking vote.

“It’s very possible Republicans win both of those seats,” said Allen, a veteran Washington journalist who co-founded Politico before going on to launch Axios in January 2017. “They only need one for Mitch McConnell to stay the majority leader, but Republicans don’t want the distraction of money and attention from the president not conceding.”

On Thursday, Allen reported in his widely read morning newsletter that Trump was considering launching a digital media company after his presidency, with the intention of rivaling Fox News. While Trump has leaned on the conservative friendly cable channel to reach voters, Allen said Trump has become increasingly upset with the network, evidenced by Thursday’s flurry of tweets and retweets pitching alternatives to Fox News.

“The president is seriously looking at is a direct-to-consumer play … where he would connect directly with his fans out there, who would pay a monthly fee,” Allen told CNBC. “Whether he starts something himself or works with an existing player like Newsmax or another conservative player, the idea is to connect directly with those fans, and let’s face it. The president needs money and he will have time. This addresses both of those.”