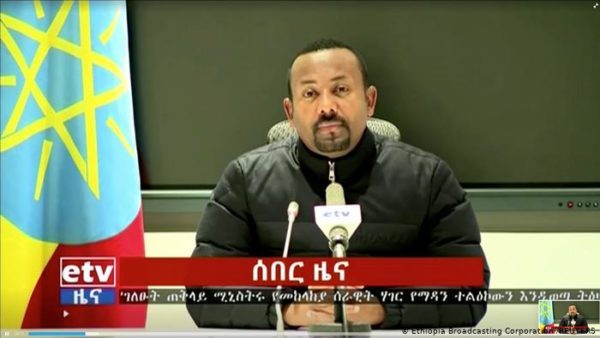 Addis Ababa, Ethiopia Fighting between Ethiopian government forces and rebellious northern leaders could spiral out of control and war crimes may have been committed, the United Nations said on Friday, as repercussions spread around the volatile Horn of Africa.

The 10-day conflict in Tigray region has killed hundreds, sent refugees flooding into Sudan, and raised fears it may draw in Eritrea or pressure Ethiopia’s commitment to an African force opposing al Qaeda-linked militants in Somalia.

It may also blemish the reputation of Prime Minister Abiy Ahmed, who won a Nobel Peace Prize for a 2018 peace pact with Eritrea and had won plaudits for opening Ethiopia’s economy and easing a repressive political system.

“There is a risk this situation will spiral totally out of control,” said UN rights chief Michelle Bachelet, adding a massacre of civilians reported by Amnesty International would amount to war crimes if confirmed as committed by a party to the conflict.

Abiy accuses the Tigray People’s Liberation Front (TPLF), which rules the mountainous region of more than five million people, of treason and terrorism.

Federal troops say the TPLF rose against them last week but that they have since survived a siege and recaptured the west of the region. With communications cut and media barred, there has been no independent confirmation of the state of the fighting.

The TPLF says Abiy’s government has persecuted Tigrayans and purged them from positions since he took office in April 2018 after a TPLF-led government. It terms the offensive an “invasion.”

Members of Amhara region militias as they head to face the Tigray People’s Liberation Front, in Sanja, Amhara region.

Federal troops have been carrying out air strikes and there has been fighting on the ground since Wednesday of last week.Refugees described bombing by government jets, shooting on the streets, killings with machetes and civilian deaths.

“The bombing has demolished buildings and killed people, and I escaped, part running on foot and part in a car,” said Hayali Kassi, 33, a driver from Tigray who reached the Sudanese border town of Al-Fashqa, now hosting more than 7,000 refugees.

There was no immediate response to Mulu’s appointment from current Tigray leader Debretsion Gebremichael, who won a local election in September despite central government orders to cancel it.

A dissertation by Mulu, on the website of Twente University in the Netherlands where he obtained a doctorate, states his birthplace as Tigray.

News also came on Friday that the African Union (AU) had dismissed its security head, an Ethiopian national, after Abiy’s government accused him of disloyalty.

Horn of Africa expert Rashid Abdi said Gebreegziabher was Tigrayan and his departure from the AU post was part of the Abiy government’s efforts to sideline prominent Tigrayans. “It also plays into the notion that this is essentially an ethnic war masked as a center-periphery power struggle,” he said.

However, Abiy this week exhorted Ethiopians to ensure Tigrayans are not targeted. “We all must be our brother’s keeper by protecting Tigrayans,” he said.

His opening of political space since taking office in 2018 uncorked ethnic frictions in Africa’s second most populous nation of 115 million people.

The local police chief told them of “the order of identifying ethnic Tigrayans from all government agencies and NGOs,” it said. Amhara borders Tigray and its rulers back Abiy.

The United Nations told the police they do not identify staff by ethnicity, according to the report. There was no immediate comment from Amhara police or government.

Rights group Amnesty International has said scores and possibly hundreds of civilians were stabbed and hacked to death in the region on November 9, citing witnesses who blamed the TPLF.

Debretsion denied that to Reuters.

More than 14,500 Ethiopian refugees — half of them children — have gone to Sudan since fighting started and aid agencies say the situation in Tigray is becoming dire. There are also concerns about a mass displacement of thousands of Eritrean refugees at a camp in Ethiopia.

In Sudan, a Reuters witness said the thousands in al-Fashqa, which lies along the banks of the Tezeke river, are mostly women and children, forced to quarrel over scarce quantities of food and water provided by the Sudanese army.

Ethiopia’s national army is one of Africa’s largest. But its best fighters are from Tigray and much of its hardware is also there, under the Northern Command.

Redwan Hussein, spokesman of a new State of Emergency Task Force for Tigray, told Reuters the offensive would not lead Ethiopia to withdraw peacekeepers abroad. “No, we are even sending troops to Darfur,” in Sudan, he said.