Lebanon decides not to charge Ghosn over his 2008 Israel trip 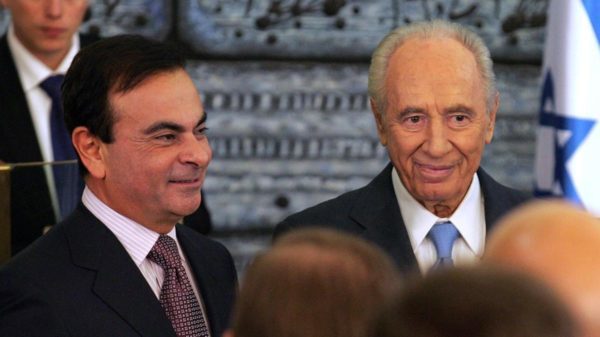 File photo : Then Israeli President Shimon Peres (C) stands alongside President of French automaker Renault-Nissan Carlos Ghosn (L) during a 2008 joint press conference at the president’s residence in Jerusalem. AFP. Prosecutor general Ghassan Oueidat decided… not to prosecute Ghosn over his visit to Israel since the statute of limitations of ten years had passed since the alleged visit.
Share:

Lebanon’s prosecutor general decided Tuesday not to charge fugitive ex-auto tycoon Carlos Ghosn for visiting Israel in 2008 because a statute of limitations has expired, a judicial source said.

Three lawyers filed a motion in January calling for the 66-year-old businessman to be prosecuted over his trip to the Jewish state as Renault-Nissan chairman.

Lebanon is technically still at war with Israel and forbids its citizens from travelling there.

“Prosecutor general Ghassan Oueidat decided… not to prosecute Ghosn for the crimes attributed to him of entering the enemy country and dealing with it economically,” the source told AFP.

“A statute of limitations of ten years had passed since the alleged crime,” the source added.

Ghosn on January 8 apologised to the Lebanese people for having visited Israel to sign a deal to produce electric vehicles, saying he travelled on business for Renault on a French passport.

The ex-Nissan chief was arrested in Japan in November 2018 on financial misconduct charges and spent 130 days in detention, before he jumped bail and smuggled himself out of the country late last year.

Ghosn appeared at a press conference in Lebanon on January 8, denying all charges and claiming he was a victim of a plot by Nissan and Japanese officials.

Japan has called on Ghosn to return to the Asian country to be tried, while Lebanon has asked Japan to hand over his file on financial misconduct charges.

He and his wife Carole are to take part in a documentary and mini-series about his life, the first of which started shooting in Beirut in September.