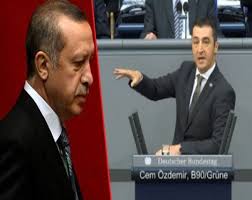 Ozdemir said in statements to the German Deutschland network on Friday that “measures must be taken against all these inciters who continue to fuel Islamist extremism for their own purposes motivated by cheap interests.”

He added, after the suspected stabbing attack of radical Islamist motives in Nice, southern France: “Turkish President Erdogan constantly pours oil on the fire, and contributes to violence and terrorism.”

The Turkish president had previously criticised the French President, Emmanuel Macron, for defending freedom of expression and publishing offensive cartoons of Islam, after the beheading of a French history teacher.

Ozdemir said: “In Germany, we need to handle Islamist organizations differently. These organizations must be established entirely according to our constitution and become independent from foreign governments.”

At least three people were killed and several others were injured in an attack in France on Thursday. The suspected attacker was arrested and France raised the terror alert level to the maximum “emergency” level nationwide, as President Macron spoke of an “Islamist terrorist attack”.

Born in Bad Urach town in the hills between Stuttgart and Ulm Özdemir is the son of a Turkish guest worker , hailing from Tokat, Turkey.