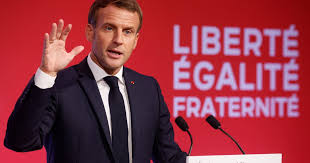 In an interview with al-Jazeera, the French president also tried to calm tensions with the Muslims world over caricatures of the prophet Muhammad

The French president Emmanuel Macron has accused Turkey of adopting a “bellicose” stance towards its NATO allies, saying tensions could ease if his Turkish counterpart Recep Tayyip Erdoğan showed respect and did not tell lies.

In an interview with al-Jazeera broadcast on Saturday,Macron condemned Turkey’s behaviour in Syria, Libya and the Mediterranean and said: “Turkey has a bellicose attitude towards its NATO allies.”

He also sought to calm flaring tensions with Muslims around the world after increasingly heated rhetoric following the murder of French school teacher, Samuel Paty, who showed caricatures of the prophet Muhammad alongside other cartoons as part of a discussion on free speech.

Macron said that France’s wish was that things “calm down” but for this to happen, it was essential that the “Turkish president respects France, respects the European Union, respects its values, does not tell lies and does not utter insults”.

He noted that France had offered its condolences to Turkey following the deadly earthquake in the Aegean and had also offered to send help to the scene.

He described Turkey’s intervention in Syria as a surprise and aggression for NATO allies, and said Ankara had not respected an arms embargo in Libya while showing a “deeply aggressive” attitude in the eastern Mediterranean.

There have been weeks of tensions between France and Turkey, which reached a peak last weekend when Erdoğan questioned the mental health of Macron.

France responded by taking the highly unusual step of recalling its ambassador to Ankara for consultations. On Saturday, foreign minister Jean-Yves Le Drian said France would send its ambassador back to Ankara after a week’s absence.

Le Drian told broadcaster RTL that Turkey made “the deliberate choice to instrumentalise” the beheading of the French teacher, accusing Ankara of launching “a hateful and slanderous campaign against us”.

However the minister said Turkey’s condemnation of a knife attack at a church in Nice this week had been “different, clear, unambiguous, but that does not preclude clarifications from Ankara”.

“We asked our ambassador to return to Ankara tomorrow to follow up this request for clarification and explanation with the Turkish authorities,” he added.

In the al-Jazeera interview, Macron said he understood that caricatures of the prophet Muhammad could be shocking, while lashing out at “lies” that the French state was behind them.

France is on edge after the republication in early September of cartoons of the prophet by the Charlie Hebdo weekly, which was followed by an attack outside its former offices, the beheading of a teacher and an attack on a church in Nice Thursday that left three dead.

Macron sparked protests across the Muslim world following the death of Paty by saying France would never renounce its laws permitting blasphemous caricatures.

But in an apparent bid to reach out to Muslims, Macron sought to strike a softer tone in a long interview with the Qatar-based channel.

“I can understand that people could be shocked by the caricatures, but I will never accept that violence can be justified,” he said.

“I understand the feelings that this arouses, I respect them. But I want you to understand the role that I have. My role is to calm things down, as I am doing here, but at the same time it is to protect these rights.”

He added: “I will always defend in my country the freedom to speak, to write, to think, to draw.”

Macron lashed out at “distortions” from political leaders over the cartoons of the prophet, saying too often people were led to believe that they were a creation of the French state.

He slammed “a confusion that has been fed by many media – and sometimes political and religious leaders – which is to say that these caricatures are in a way the project or the creation of the French government or the president”.

He also denounced calls for a boycott of French goods, backed in particular by Erdoğan and taken up by some retailers in Muslim countries, as “unworthy” and “unacceptable”.

He said the campaign was created by some private groups “who relied on lies … sometimes from other leaders” about the caricatures.

Even before the attack on Paty, Macron had promised a tough new campaign against Islamist radicalism in France, which has claimed the lives of hundreds of people since 2015.