U.S. slams Iran with another round of sanctions over support for ‘terrorist entities’ 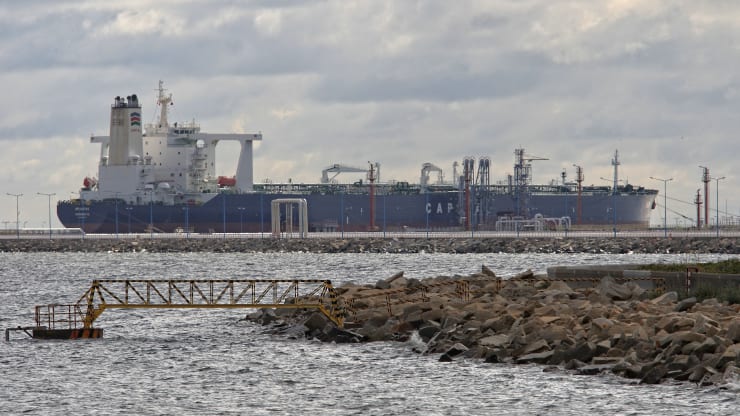 The Atlantas tanker, carrying 2 million barrels of Iranian crude oil for Polish Lotos reffinery is seen at the Naftoport oil terminal in Gdansk. The first transport of Iranian oil to Gdansk is the result of an agreement between the Lotus Group and the National Iranian Oil Company (NIOC). Michal Fludra | NurPhoto | Getty Images
Share:

WASHINGTON — The Trump administration on Monday announced a slew of fresh sanctions and additional measures targeting Iran’s petroleum sector as Washington continues to up the ante in its maximum pressure campaign against Tehran.

The Treasury Department imposed sanctions on Iran’s Ministry of Petroleum, the National Iranian Oil Company and the National Iranian Tanker Company for providing financial support to Iran’s Islamic Revolutionary Guard Corps and the Assad regime in Syria, according to a release Monday.

Treasury also designated multiple entities and individuals associated with the petroleum ministry, the oil company and the tanker company, including front companies, subsidiaries and senior executives. In addition, Treasury designated four persons involved in the recent sale of Iranian gasoline to the Maduro regime in Venezuela.

According to Treasury, the cooperation and coordination of these entities to sell oil resulted in the collection of tens of millions of dollars in proceeds that benefited Iran’s Islamic Revolutionary Guard Corps.

“The regime in Iran uses the petroleum sector to fund the destabilizing activities of the IRGC-QF,” said Secretary Steven Mnuchin in a statement. “The Iranian regime continues to prioritize its support for terrorist entities and its nuclear program over the needs of the Iranian people,” Mnuchin added.

The latest revelation comes a little over a week until Election Day and one month after the United States unilaterally reimposed U.N. sanctions on Tehran through a snapback process, which other U.N. Security Council members have previously said Washington does not have the authority to execute because it withdrew from the nuclear deal in 2018.

“No matter who you are, if you violate the U.N. arms embargo on Iran, you risk sanctions,” Pompeo said in an address on Sept. 21. “Our actions today are a warning that should be heard worldwide,” he added.

Esper followed on Pompeo’s remarks and said the Pentagon was “ready to respond to future Iranian aggression” and called on Tehran to “act like a normal country.”

“We continue to stand shoulder to shoulder with our allies and partners to counter Iran’s destabilizing behavior. In doing so, we will protect our people and our interests and maintain the security of like-minded nations across the region,” Esper added.

Tensions between Washington and Tehran have mounted after President Donald Trump’s withdrawal from the landmark Iran nuclear agreement in 2018, calling it “the worst deal ever.”

The 2015 accord lifted sanctions on Iran that crippled its economy and cut its oil exports roughly in half. In exchange for sanctions relief, Iran accepted limits on its nuclear program until the terms expire in 2025.

Trump has previously said that the U.S. wants to reach a broader deal with Iran that puts stricter limits on its nuclear and ballistic missile work and suppresses the regime’s role in regional proxy wars. Tehran has refused to negotiate while U.S. sanctions remain in place.