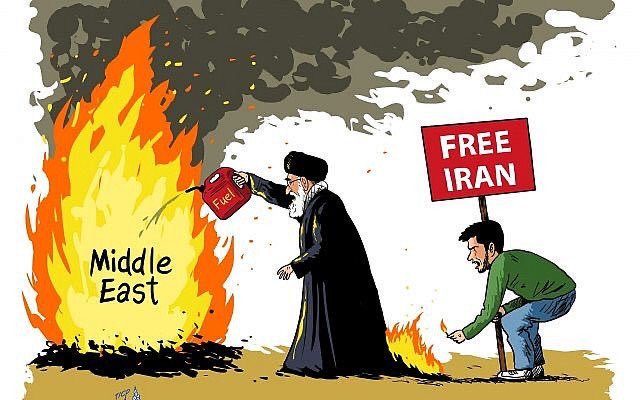 File Photo: Cartoon shows a protester trying to set Iran’s supreme leader on fire to free Iran from the regime that has been setting the whole Middle east on fire
Share:

NEW YORK: In just a couple of weeks, Americans will cast their ballots against a backdrop of civil unrest, racial tensions, political polarization and an economy crumbling under the stress of the world’s worst coronavirus outbreak.
In the run-up to the Nov. 3 presidential election, the Arab News/YouGov survey asked what the Arab world thinks are the greatest threats facing the US. Given the turbulence, it is difficult perhaps to settle on which of these challenges is the most pertinent.
However, for 32 percent of the respondents, white nationalism topped the list. China came in second place, with 22 percent of Arab respondents identifying the world’s second biggest economy as among the biggest threats facing the US today. “It shows that the Arab population is better informed about different issues here in the US.”
Arab respondents do seem to have their finger on the US political pulse.
Just recently, 13 members of an armed white militia were charged with plotting to kidnap Gretchen Whitmer, the Democratic governor of Michigan, and to overthrow the state government.
It also follows months of growing concern at the apparent spread of “alt-right” views, clashes between Black Lives Matter protesters and white supremacists, and Donald Trump’s failure to denounce the far-right Proud Boys during the first presidential television debate with his rival Joe Biden.

“The threat of racist, extreme, right-wing groups is the number one threat in terms of terrorism committed on American soil,” Jahshan said. “It has replaced a threat that was for a while, after 9/11, perceived as coming from radical Islamic sources.”
Although the US president has had Iran in his crosshairs, it is hardly surprising that the Arab public see China as America’s greater foe. Over the course of his presidency, Trump’s anti-Chinese rhetoric has swung from that of a mere trade war to implying Beijing deliberately unleashed the “Chinese virus” (COVID-19) to weaken the US economy.

“That didn’t play well in Peking (Beijing). And, of course, that relationship has fallen into disarray,” said Jahshan.
Despite their concerns about Iran’s malign influence in their own Middle East neighborhood, only 9 percent of the Arab News/YouGov pan-Arab poll respondents felt Tehran posed more of a threat to Washington than China.
“That low number reflects the gap between Arab and American public opinion (on the question of the Iranian threat). The typical Arab is not convinced that the US is on his side when it comes to Iran,” Jahshan said. “That is the general sentiment, particularly in the Gulf, a category that tends to view Iran as the principal enemy, with the US as a main ally.”

Beyond geopolitics, Arab respondents appear to have read the mood well on climate change, reflecting the view that Trump has rolled back much of the recent progress on environmental protection. “The fact that 5 percent of Arab females and 9 percent of Arab males see that issue as a vital threat to the US is correct,” Jahshan said. “I only wish the numbers were higher.”
As a longtime Middle East observer who has dealt with several Arab governments over the past four decades, Jahshan says that he is pleased to see Arab public opinion being taken into consideration for the first time.
“It is encouraging and instructive to see these surveys. I hope that will make Arab public opinion become a factor in foreign policy, be it here in the US or in the Arab countries,” he said.