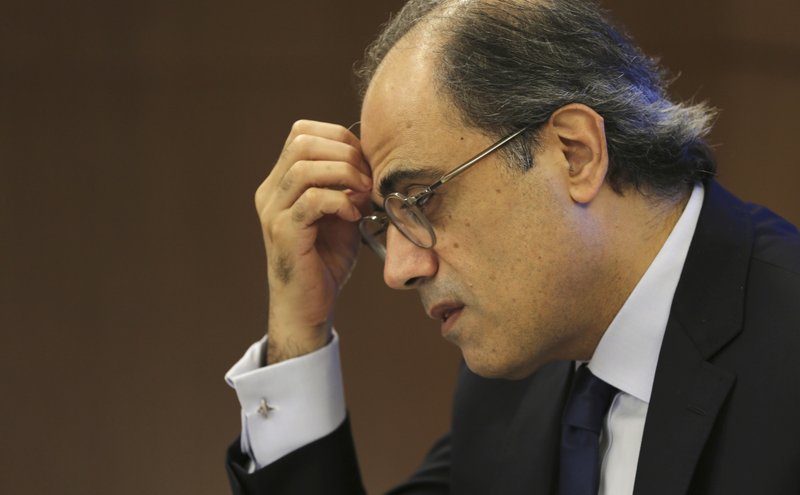 FILE – In this Nov.13, 2018 file photo, Former Lebanese minister of economy Jihad Azour, the current IMF’s director of the Middle East and Central Asia Department reacts during his press conference in Dubai, United Arab Emirates. The coronavirus pandemic is hitting countries in the Middle East in wildly different ways, but nearly all are in the throes of an economic recession this year and all but two, Lebanon and Oman are expected to see some level of economic growth next year, according to the latest report published by the International Monetary Fund on Monday, Oct. 19, 2020. (AP Photo/Kamran Jebreili, File)
Share:

DUBAI, United Arab Emirates (AP) — The coronavirus pandemic has pushed nearly all Mideast nations into the throes of an economic recession this year, yet some rebound is expected as all but two — Lebanon and Oman — are anticipated to see some level of economic growth next year, according to a report published Monday by the International Monetary Fund.

This comes as the IMF estimates that the global economy will shrink 4.4% this year, marking the worst annual plunge since the Great Depression of the 1930s.

Well before the coronavirus swept across the globe, several Mideast countries had been struggling with issues ranging from lower oil prices and sluggish economic growth to corruption and high unemployment.

The IMF projects the Lebanese economy will see one of the region’s sharpest economic contractions this year at 25%. The pandemic has only pushed the country further to the brink after a wave of anti-government anger before the virus struck.

While Mideast nations have seen fewer confirmed cases and deaths from the virus than countries in Europe and the U.S., the region still faces challenges in containing the disease.

“Risks of a worse-than-projected scenario loom large, particularly given recent surges in COVID-19 infections in many countries around the world that have reopened,” the IMF warned.

Iran, for example, recorded its highest daily death tolls from the virus last week. Its economy shrank by 6.5% last year and is projected to contract by another 5% this year. The IMF, however, expects Iran’s economy to rebound with 3.2% growth next year, based in part on the government’s future capacity to manage the virus, which it thus far as has struggled to do.

“Iran was among the first countries to become an epicenter of COVID-19 and we are now in the third wave of the pandemic, and this was on top of an economy that has been underperforming because of (U.S.) sanctions,” Jihad Azour, director of the Middle East and Central Asia Department at the IMF, told The Associated Press.

The IMF revised its gloomy estimate of Saudi Arabia’s economic contraction down from 6.8% to 5.4%. As one of the world’s largest oil producers and top 20 largest economies, the kingdom took the bold step this year of trying to shore up more revenue by tripling value-added tax to 15% and increasing customs duties.

Egypt was the sole outlier in the region, experiencing modest growth of 3.5% this year after more than 5% growth annually for past two years as lower energy prices help it as an oil importer. Still, Egypt faces challenges with its massive population and as tourism revenues remain sluggish.

The IMF, known for its bullish stance on taxes and subsidy cuts, has largely suspended its calls for belt-tightening austerity measures as people struggle under the weight of lockdowns and job losses. The IMF said “in general, tax increases would be more effective after the crisis” as such measures “will likely be a drag on the recovery and invite larger fiscal costs in the future.”

The international lender is calling on countries to focus their immediate priorities on ensuring adequate resources for health care and correctly targeting support programs to the most-vulnerable people.

Meanwhile, other Mideast oil exporters like the United Arab Emirates, home to Dubai and Abu Dhabi, will see an economic contraction of more than 6% this year, while Oman’s economy is projected to shrink by 10%. Iraq faces a recession of 12%, the IMF said.

The World Bank estimates the pandemic has thrown between 88 million and 114 million people into extreme poverty, which is defined as living on less than $1.90 a day.

While Mideast states have rushed to provide various forms of support to their own citizens amid the pandemic, the impact from the virus has been acutely felt by many of the millions of low-wage laborers who hail mostly from South Asia and reside in the region. Their families back home rely on their salaries for survival.

Azour said Gulf Arab states alone provide 18% of global remittances. He said these countries should use the moment “to modernize labor laws” by providing support to all laborers in their countries.