LF MP: Hariri is and will remain an ally but doubt his ability to carry out reforms 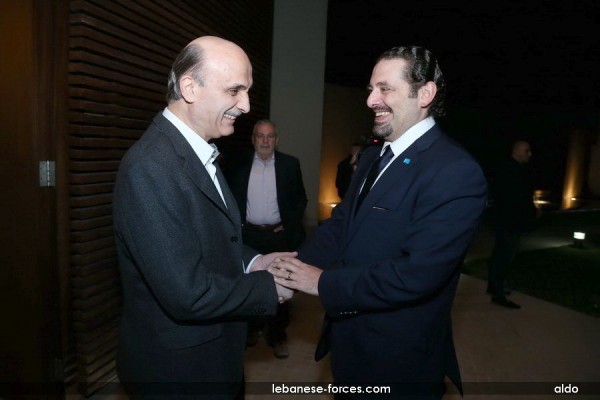 File photo of former Lebanese PM Saad Hariri and Lebanese Forces leader Samir Geagea when they were closely allied . Their Relations deteriorated after Hariri was detained in Saudi Arabia in November 2017. Geagea was at the time accused of betraying Hariri , but very few details surfaced at the time
Share:

Lebanese Forces MP Anis Nassar said that his party’s MPs would not endorse former Prime Minister Saad Hariri for the premier position once again because it is not clear whether he would be capable of carrying out the required reforms.

“Prime Minister Hariri is always an ally and will remain an ally but the question , is he ready to carry out the required reforms,” Nassar said in an interview with Al-Jadeed Sunday evening.

President Michel Aoun is set to hold binding consultations with parliamentary blocs Thursday to appoint a new prime minister. He delayed the consultations by one week due to opposition from the main Christian blocs over Hariri’s possible designation.

Nassar said that the Lebanese Forces would attend the consultations but will not put forward anyone’s name for PM.

“It’s not Saad Hariri who needs support, it is Lebanon that needs support. Lebanon is at rock bottom and we don’t wan’t Hariri to be an agent of bankruptcy,” Nassar said.

Tashnag Party head MP Hagop Pakradounian meanwhile told Al-Jadeed that his party may diverge from the stance of its ally the Free Patriotic Movement by nominating Hariri.

“It’s not necessary that our stance is the same as that of the Free Patriotic Movement,” he said, adding that Tashnag MPs possible naming of Hariri “will not lead to separation” between the two allies.

Hariri has said that he is willing to be the next prime minister only if all parties are committed to French President Emmanuel Macron’s reform road map and to forming a small government of specialists.

The FPM says that Hariri can’t be the head of a technocrat type government because he is a politician.

There are currently no other potential candidates for the role of PM.

Parliament Speaker Nabih Berri in comments published in Al-Joumhouria Monday implicity criticized the FPM and LF for their stance on Hariri’s possible nomination.

With the The Daily Star