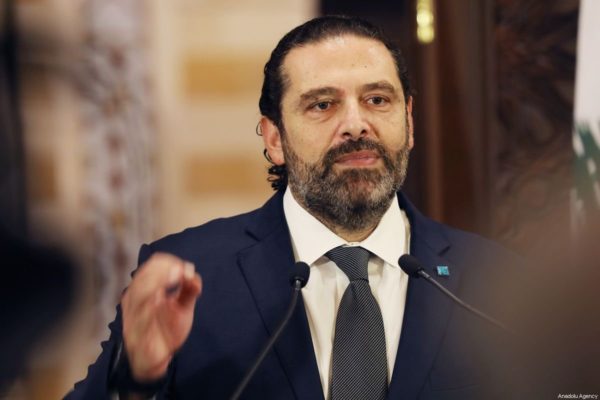 Former Lebanese Prime Minister Saad Hariri warned on Thursday evening of the imminent danger of a civil war in the country.

This came in an interview with MTV (a local private TV channel), in which Hariri asserted: “Hezbollah is behind the crisis in Lebanon.”

Hariri expressed his concerns about: “The collapse of the state due to the ongoing arms race and military parades that take place in most of the streets of Beirut and Baalbek-Hermel.”

He blamed Hezbollah factions for all the problems in Lebanon, noting that: “The Lebanese people are not responsible for the sanctions imposed on them,” adding “Hezbollah has to let people live.”

The former official referred to the situation in Syria, explaining that Hezbollah: “Wants to treat the Sunnis in Lebanon the same way they [the Sunnis were treated there [in Syria].”

Hariri confirmed his support for the peaceful Syrian revolution against Bashar Al-Assad: “Who committed crimes that nobody has ever done before.”

Regarding the demarcation of land and sea borders between Lebanon and Israel, Hariri noted: “This will be beneficial for Lebanon, but it should have started three years ago.”

He considers that the border demarcation file: “Has now been worked on, because some people are threatened with sanctions, and everyone wants to protect themselves.”

Earlier this month, Speaker of the Lebanese parliament Nabih Berri announced that the negotiations on the demarcation of land and sea borders with Israel will be held in mid-October under the auspices of the United Nations.