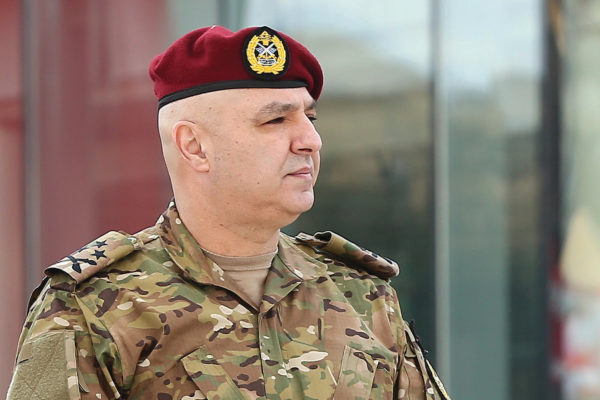 “The Army chief gave the basic directives for launching the negotiation process with the aim of demarcating the maritime borders on the basis of the line starting from Ras Naqoura on land and extends by sea according to the midline technology,” said the statement.

It said the “line will not take into account any impact of the coastal islands of occupied Palestine.”

The statement also noted that the line was drawn “based on a study prepared by the Army Command in accordance with international laws.”

Lebanon and Israel, which are still technically at war, last week said they had agreed to begin UN-brokered negotiations over the shared frontier, in what Washington hailed a “historic” agreement.

The US-backed talks are set to begin next Wednesday at the headquarters of the UN peacekeeping force UNIFIL in the Lebanese border town of Naqoura.

Lebanon and Israel, each claim about 860 square kilometers (330 square miles) of the Mediterranean Sea as within their own exclusive economic zones.

Indirect talks mean that Lebanese army negotiators will not be speaking directly to members of the Israeli delegation but through U.N. and U.S. officials.

The United States has been mediating between Lebanon and Israel since 2010 until a breakthrough was reached in July on the framework for the indirect talks, according to Lebanon’s Parliament Speaker Nabih Berri, who announced the deal last week.

He said the U.S. mediation stalled but it received a push in March last year during a visit to Beirut by U.S. Secretary of State Mike Pompeo during which he discussed the dispute with Lebanese officials.

Lebanon’s President Michel Aoun welcomed the agreement saying he hopes “that the American side will continue its role as a fair mediator.” Aoun said he will be closely supervising the talks starting with the formation of the team and throughout the negotiations.

Lebanon and Israel hold monthly tripartite indirect meetings in Naqoura to discuss violations along their border. The countries also held indirect negotiations in the 1990s when Arab states and Israel were working on reaching peace agreements. Although the Palestinians and Jordan signed agreements with Israel, Lebanon and Syria did not.

The agreement on the framework comes as Lebanon is going through its worst economic and financial crisis in decades. Beirut is hoping that oil and natural gas discoveries in its territorial waters will help it pay back its massive debt.

Lebanon began offshore drilling earlier this year and is expected to start drilling for gas in the disputed area with Israel in the coming months.

Berri, the parliament speaker, said the gas discoveries on the Israeli side of the Mediterranean “prove that there are reserves and God willing this will help us pay our debt.” Lebanon has one of the highest debt ratios in the world standing at about 170% of its GDP.

Three of Lebanon’s 10 offshore blocks are along the disputed maritime border with Israel.

The Trump administration is likely to celebrate the agreement as another diplomatic breakthrough in the Middle East, following recent agreements in which the United Arab Emirates and Bahrain — Gulf countries that have never gone to war with Israel — agreed to recognize it and establish diplomatic relations.

U.S. Assistant Secretary of State for Near Eastern Affairs David Schenker, said the talks have nothing to do with the establishment of diplomatic relations or normalization between Lebanon and Israel. He added that “they will hopefully come to a resolution that will allow both sides to benefit from the resources there.”

Israel invaded Lebanon twice during the country’s 1975-1990 civil war to battle Palestinian militants who had launched cross-border attacks, and it occupied a strip of territory in southern Lebanon until 2000.

In 2006, Israel and Hezbollah fought a 34-day to a draw and the border has been relatively calm since despite some minor skirmishes.