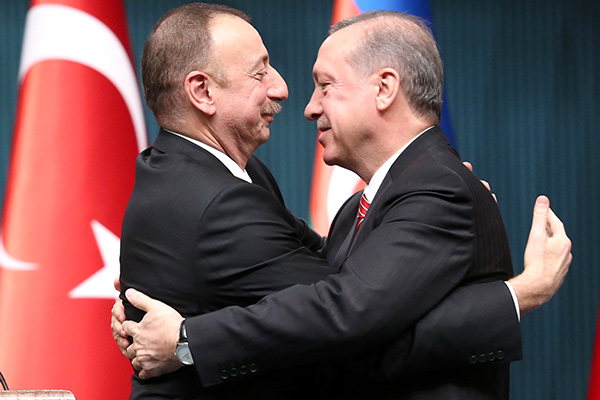 PARIS: France accused Turkey on Wednesday of “military involvement” on the side of Azerbaijan in its conflict with Armenia over the breakaway Nagorno-Karabakh region, the latest volley in a war of words between Paris and Ankara.
“The new aspect is that there is military involvement by Turkey which risks fuelling the internationalisation of the conflict,” French Foreign Minister Jean-Yves Le Drian told parliament.
Armenia and Azerbaijan, two former Soviet republics, have for decades been locked in a conflict over Nagorno-Karabakh . Nagorno-Karabakh a 4.400-square-kilometer (1,700-square-mile) enclave with a population of 150,000 is situated in the heart of Azerbaijan, but most of the population are Christian Armenians, with only a minority of Azeris or Turks. The enclave is a product of the Soviet policy of divide-and-rule, a policy that has been used by all occupiers . With the dissolution of the Soviet Union, Armenia tried using peaceful methods in order to transfer the enclave to its sovereignty, but this met with opposition. War broke out between the two countries in 1988 over control of this enclave. This intensified in 1991 and lasted for three years, and included ethnic cleansing and a massacre of Armenians in Baku. Thirty thousand people died, and one million lost their homes.
Heavy fighting erupted again on September 27, with both sides blaming each other for reigniting hostilities.
The conflict has drawn in regional players, with Turkey urging support for Azerbaijan and Armenia hoping that its ally Russia – which has so far stayed on the sidelines – will step in.
Turkey has been accused of deploying fighters from Syria to support Azerbaijan in the fighting.
French President Emmanuel Macron recently claimed Ankara had sent Syrian “jihadists” to the region, accusing Turkey of crossing a “red line”.
Turkey has not responded publicly to the accusations.
Le Drian on Wednesday said France deplored “a large number of civilian casualties for little territorial progress on the part of Azerbaijan, given it is Azerbaijan that initiated the conflict.”
He repeated the call for an immediate end to fighting and a return to negotiations mediated by the so-called Minsk group co-chaired by France, Russia and the United States.
“There will be meetings tomorrow in Geneva, others on Monday in Moscow and we hope that this will lead to the opening of negotiations,” the minister said.