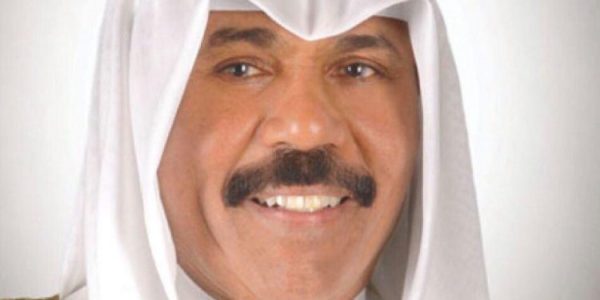 He made the statement as he was , receiving condolences from Lebanon’s top three officials for the passing of Emir Sheikh Sabah al-Ahmad al-Sabah, who passed away last week.

“Kuwait during my reign will remain by Lebanon’s side and will continue its path of support,” Emir Sheikh Nawaf al-Ahmad al-Jaber al-Sabah said.

The new Emir of Kuwait is the sixth son of the 10th Ruler from the Al Sabah dynasty, Sheikh Ahmad Al-Jaber Al-Sabah, who ruled Kuwait from 1921 to 1950.

A half-brother to two of the gulf state’s rulers, Sheikh Nawaf al-Ahmad was born on June 25, 1937 and was raised in Dasman Palace. He received his early education in different Kuwaiti schools.

He assumed his first governmental position on February 21, 1961 as governor of Hawalli Governorate, until March 19, 1978, when he was appointed Minister of Interior for ten years.

He is credited for shaping the modern administration at the Kuwaiti Interior Ministry. He assumed responsibility for the ministry over two periods, the first from March 1978 to January 1988, and the second from 2003 to 2006.

On January 26, 1988, he was appointed the country’s Minister of Defense and served in this position until 1992.

Following the liberation of Kuwait from the Iraqi invasion, he was appointed as the acting Minister of Labor and Social Affairs in April 1991. Between 1994 and 2003, he was appointed the deputy chief of the National Guard.

In 2003 he returned to his former post as Interior Minister and served that office until 2006, when he was designated Crown Prince.

Since its independence in 1961, Kuwait  maintained strong  relations with Lebanon. Many Kuwaitis considered Lebanon their second home and spent their summer holidays in Lebanon . Kuwait also has consistently been one of the leading financial backers of Lebanon’s Central bank. But relations recently have been going downhill because of Hezbollah’s interference in the region. Kuwaiti authorities in Aug 2017 arrested 12 convicted members of a “terrorist cell” with ties to Iran and Hezbollah after a weeks-long manhunt. The cell had reportedly planned to launch attacks across the Gulf state, according to the court verdict.

Lebanese people form one of the largest communities of non-citizen Arabs in Kuwait.