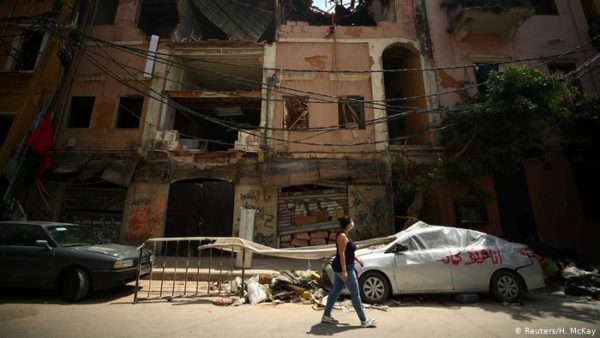 Since the violent explosion in Beirut in early August, Lebanon has found no peace. Ever more Lebanese want to leave the country. With her bags packed, Cindy Chemaly Cochrane says she no longer wants to live in fear.

Cindy Chemaly Cochrane and her husband Paddy Cochrane don’t want to rebuild their Beirut apartment. They’re not looking to replace their smashed car or rebuild their destroyed restaurant either.

“We will leave Beirut for good,” she says. “I’m not putting anything more into this country.” The family wants to emigrate to Ireland, as Paddy is part-Irish, as well as Italian and Lebanese — he thus has dual Irish-Lebanese citizenship. Cindy is Lebanese.

‘Something even worse will happen here’

“I’ve spent my whole life and experienced so much here: the civil war, the many murders and now the economic crisis. We’ve often lived in uncertainty and fear,” the 40-year-old says. But there had always been something that made her decide to stay in the city where, ultimately, her heart is.

For more than a decade, Cindy and her 44-year-old husband had run a restaurant in the area that took the brunt of the August blast. “The restaurant in Gemmayzeh lies in rubble and ashes. And I have the feeling that something even worse will happen here.”

Over the past decades, Lebanon has seen several phases of emigration due to insecurity, war or crises, such as during the 1975 to 1990 civil war and the years following it, or through the period of political unrest between 2005 and 2008. According to various estimates, between 10 and 14 million Lebanese now live outside the country. Only about 5 million Lebanese live in the small Mediterranean state.

After the explosion punctuated the ever-worsening economic crisis, more and more Lebanese want to leave once again. For the poorest and those without any other option, the dangerous Mediterranean route via Cyprus has recently become increasingly worth the risk.

The Cochrane family also have their bags packed. Before they go, some of the walls have to be reinforced to prevent what is left of their apartment from collapsing, and smashed doors and windows will need replacing.

“We’ve given the country so many chances. Now it’s not just about my husband and me, but our two-and-a-half-year-old daughter Zoe, too. She should grow up in a safe environment,” Cindy says.

Home no longer a safe place

Even in her worst dreams, Cindy never thought her daughter could be in danger in her own home. With Zoe particularly vulnerable to COVID-19, they had hardly left their apartment. On the day of the explosion, she had her first play date in months.

Zoe’s friends had just been taken home. She was with her father Paddy on the top floor of the apartment in Gemmayzeh. Cindy was on the phone downstairs when the balcony door flew into her face. When she came to, she got up and looked for husband and daughter.

“I went upstairs and called out for them — no answer. It was the worst four minutes of my life until I found them huddled in one of the rooms.” Zoe had severe head injuries. Her husband had a large wound on his arm. Cindy had cuts everywhere. Miraculously, in the midst of the chaos, they made it to a hospital 90 minutes later.

“I will never forget the sight there: People missing limbs, all covered in blood,” says Cindy. “I told my daughter we were at a costume party where everyone was painting themselves red,” trying to protect Zoe from being frightened.

Cindy sent a photo to her family: “One where I forced myself to laugh so that nobody would worry,” she says, particularly to reassure her mother. Zoe and her parents have now, at least physically, recovered.

“We shouldn’t have to be grateful that we are still alive, because we shouldn’t have been in this situation in the first place,” Cindy says. Almost 200 people died in the explosion, including Paddy’s grandmother, Lady Cochrane Sursock, owner of the now destroyed historic Sursock Palace in Beirut. Six thousand people were injured. “Those people did not have to die,” she says.

What happened was avoidable, Cindy says. “People here always say, ‘God has been kind to us survivors’ — but I don’t want to live in fear anymore.”

Lebanon looks to be at the end of its tether, not only financially and economically, but also politically. Forming a new government of capable technocrats would probably have been the country’s last chance before bankruptcy. But Lebanon’s powerbrokers could not agree on designated Prime Minister Mustapha Adib’s proposed Cabinet, and he resigned on Saturday as a result. Some Lebanese observers say that the political class would rather risk a civil war than give up their posts.

“We had hope, but nobody relies on that hope anymore,” says Christine Hauser, owner of the Hotel Bossa Nova, where the Cochrane family found shelter in the first days after the explosion. Many others like the Cochranes remain at the hotel to this day, while still more arrive to escape the rubble where they are forced to continue living their lives. “These politicians will never let us live in dignity,” she says without hope.

Although Hauser’s hotel is five kilometers from the epicenter of the blast, its glass facade was shattered. Her husband, Sebastian Kracun, was at the reception desk at the time. Fortunately, nobody was injured.

“Of course, we are also thinking about leaving,” says Kracun. “At the moment, we can still cover the cost of the hotel, even if we are only paid in Lebanese pounds and take in the equivalent of $22 for a room per night, due to the currency devaluation.”

The Lebanese Lira has lost 80% of its value. With most businesses relying on imports, whose prices have skyrocketed, the future of Kracun and Hauser’s hotel is uncertain. Banks have also stopped people from withdrawing deposits to stave off collapse.

“Even if we wanted to leave it has become impossible, because we can’t get our money from the bank,” Hauser says. How are we supposed to start over somewhere else without capital?”

But if something worse should happen, like a civil war, they would close the hotel and leave the country. Their goal is to get to the UK. Hauser is Lebanese and Kracun has both British and German passports, as do their two children.

“Everything that happens here is no longer in our hands,” Hauser says. Environmental pollution, mountains of garbage, expired medicines and expired food are all now part of everyday life in Lebanon.

“They kill us slowly, even from the inside. They have changed us forever,” says Hauser. “We will never forget what happened. So many people are suffering from trauma and live in anxiety,” she says. Her son also has nightmares.

Cindy Cochrane also has repeated panic attacks. She currently sees a Lebanese therapist but will take advantage of online therapy once she has left Beirut. “We will start over again in Ireland,” she says. “We’re not planning to return to Beirut — not until there is a fundamental change there.”