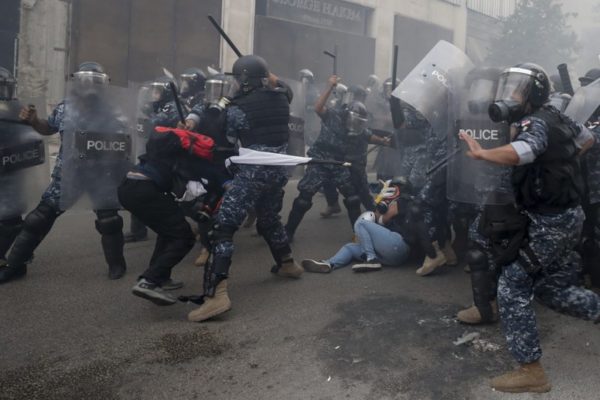 Beirut, Lebanon – Tensions in Iraq and Lebanon are reaching fever pitch as the US elections draw near and raise the stakes in the Middle East’s geopolitical battlegrounds.

In Iraq, a slew of rocket attacks suspected to have been launched by Iran-backed armed groups in recent weeks have prompted US Secretary of State Mike Pompeo to threaten a diplomatic pull-out from Baghdad.

In Lebanon, a French initiative to broker a political resolution meant to stave off state collapse may have come to a screeching halt as the country’s Saudi-backed politicians lock horns with Iran-backed Hezbollah.

These latest developments raise the specter of disaster in both these countries, according to analysts, and appear linked to the approach of US elections on November 3.

Iraq on the brink

The recent round of rocket assaults in Iraq may have triggered the threat to shutter the US embassy, but they are not a new phenomenon.

“The timing is definitely something we have to look at,” Iraq analyst Sajad Jayid told CNN. “Why suddenly is the US talking about closing the embassy when these attacks have been going on since last year?”

Pompeo’s warning blindsided the Iraqi government. It came on the heels of a trip by the US-backed Iraqi Prime Minister, Mustafa al-Kadhimi, to Washington in late August, which was widely viewed as successful.

“On the most important US concern, Kadhimi did not promise to eliminate Iranian influence in Iraq, and Trump did not press him on it. He did not need to,” wrote Andrew Peek, former Deputy Secretary of State for Iraq and Iran at the US State Department, in a blog post for the Atlantic Council, a non-partisan think tank.

“The visit itself, and others like it, is much of how the United States competes with Iran in Iraq: through engagements, visits, and other symbolic gestures … and that is usually good enough for American national-security interests,” Peek added.

But amid the latest wave of attacks, one of which killed five members of one family near Baghdad’s airport, the White House has upped the ante, pressuring Kadhimi to restrain armed groups allied to Tehran. With Iran-backed parties holding a sizable portion of the country’s parliamentary seats, this is a tall order.

“Kadhimi is in a very difficult position. Realistically he can’t do much,” said Jayid. “He does not have the capability to impose rule of law completely and suddenly go after all of these groups that have been threatening the US.”

But the upcoming elections may prompt drastic action. A successful attack on US diplomatic facilities could deal a deadly blow to US President Donald Trump’s re-election campaign. Trump may take dramatic steps, said Jayid,

including ordering the pull-out of US diplomats, in an effort to avoid a repeat of the 2012 Benghazi attack that killed US ambassador to Libya J. Christopher Stevens.

“It doesn’t bode very well for Iraq,” said Jayid. “The attacks are not going to stop and I think the Americans are going to have to make a decision.

“Do they follow through and close the embassy? Do they respond to these attacks if they believe the Iraqi government is incapable? And we’re back to a cycle of violence.”

The latest tensions, analysts say, are reminiscent of the lead-up to the US targeted killing of Iranian top general Qasem Soleimani near Baghdad airport on January 3. The attack seemed to bring the region to the verge of a cataclysmic war, but after Iran retaliated with rounds of ballistic missiles that ravaged some US positions in Baghdad, that geopolitical conflict returned to a low boil.

In Lebanon, which has trudged through a maelstrom of crises over the last year, a new disaster looms. The country’s political impasse has deepened at a time when its foreign currency reserves are rapidly drying up — putting the prospect of badly needed international aid further out of reach.

Amid the uncertainty surrounding a potential change of power in Washington, the chances of a breakthrough before the November elections are close to none, analysts say. And the absence of one could cause the state of Lebanon, which celebrated its centennial last month, to disintegrate.

Western countries have preconditioned billions of dollars of aid on the creation of a rescue government that would usher in economic reform, but initial talks brokered by French President Emmanuel Macron fell through last month. Macron then extended his deadline for a resolution from September 15 to a two-week period between November 2 and November 16.

To local observers, the new timeframe appeared to confirm what they had long suspected: the political deadlock between the country’s rival camps — which is roughly split between groups backed by Iran and those supported by Tehran’s regional foe, Saudi Arabia — will not end before the outcome of the November elections is known.

The stalemate centers on the future of the Iran-backed political and armed group Hezbollah. In recent years, it has made large institutional gains, with its coalition winning a majority of seats during Lebanon’s parliamentary elections in May 2018. Hezbollah has repeatedly said it suspects that the US, which designates the group as a terrorist organization, has tried to diminish its power.

It has also accused the US, and Washington-backed local politicians, of exploiting an anti-establishment popular uprising that began last October to try to weaken the group’s political standing.

Heiko Wimmen, project director of Iraq, Syria and Lebanon at International Crisis Group, describes it as a “high stakes game” that has intensified in the run-up to the US elections.

When Macron visited Lebanon in the wake of the August 4 explosion that ripped through Beirut, he publicly met with a Hezbollah official — becoming the first Western leader to do so in years — and the group then promised to cooperate with the French initiative. This seemed to signal a new diplomatic approach to Lebanon’s crisis.

But as time went on, the impasse between Hezbollah and its rivals deepened. Pompeo openly criticized Macron’s engagement with Hezbollah, and US sanctions were imposed on allies of the group for the first time. The talks came to a standstill. Macron chastised Hezbollah and accused the ruling elite of “betrayal,” while Saad Hariri, the Saudi-backed political leader and former prime minister, and Hezbollah traded blame.

Ultimately it was the murkiness of the process, and Pompeo’s use of a stick as Macron waved a carrot, which helped push the talks to a standstill, suggested Wimmen. “It’s ambiguous messaging and (Hezbollah) doesn’t really know what (the US) wants and how far they are willing to go,” he said.

“No reset is going to happen under (Democratic nominee Joe) Biden. They know that. But in some way the cards are going to be reshuffled if it goes that way,” he said.

Meanwhile, time is not on the side of the eastern Mediterranean country. Subsidies of basic goods, buckling under financial strains, could soon end, potentially causing further poverty and unrest. President Michel Aoun said the country could soon “go to hell.” Macron has raised the specter of civil war.

Disgruntlement with the political class has also risen yet further, and the feeling that the ruling elite have put party interests over country is widespread.

“My expectation is another period of impasse, polarization and an inability to talk,” said Wimmen. “We may see the gradual degradation of the state … a gradual slide into a country that has a mosaic of areas of control and areas without control that are quite dangerous.”

The uncertainty in both Lebanon and Iraq may keep these countries in a holding pattern for some time to come, but the danger of the region spiraling into another cycle of violence is a distinct possibility.

Trump’s diagnosis with Covid-19, revealed on Friday morning, may have added to that volatility. As US pundits speculate about the ramifications of the health threat on national security, Washington’s rivals in the region may be reconsidering their political calculus.