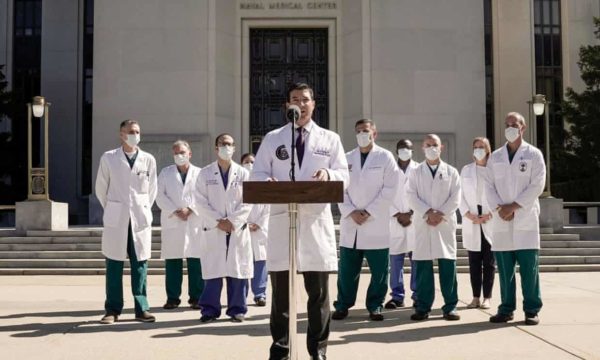 Concerns mounted over the true state of Donald Trump’s health on Saturday as the US president’s coronavirus diagnosis raised doubts over transparency from the White House and engulfed the election in further chaos and controversy.

Briefings outside the hospital where Trump is a patient raised more questions than answers.

Doctors insisted that Trump, who was admitted to the Walter Reed national military medical center in Bethesda, Maryland, on Friday evening after being diagnosed with Covid-19, was “doing very well” and “there is no cause for concern”.

But just moments later, confusion reigned and fears for Trump grew as it emerged that a separate, unnamed briefing had been given to the pool reporters assigned to cover the president, and it was less upbeat.

“The president’s vitals over the last 24 hours were very concerning and the next 48 hours will be critical in terms of his care. We’re still not on a clear path to a full recovery,” said the source, who was subsequently identified as Mark Meadows, the White House chief of staff.

It raised concerns that the president’s condition was worse than first thought and that the public is being misled.

In a Reuters report later on Saturday, Meadows offered a much more optimistic outlook. “The president is doing very well. He is up and about and asking for documents to review. The doctors are very pleased with his vital signs. I have met with him on multiple occasions today on a variety of issues,” he said.

Amid the contradictory reports, Trump shared a four-minute video message on Saturday night in which he appeared pale, but said he was feeling “much better now”.

Wait, what happened here after the word "therapeutics"? pic.twitter.com/6tkBkreJTk

“I’ll be back, I think I’ll be back soon, and I look forward to finishing up the campaign the way it was started and the way we’ve been doing and the kind of numbers that we’ve been doing,” Trump said from behind a desk in his hospital suite.

He acknowledged the “real test” would come in the next few days. “So we’ll be seeing what happens over those next couple of days.”

Sean Conley, the president’s personal physician, who led the official medical briefing outside the hospital, was evasive under questioning as to whether Trump had ever received oxygen in the aftermath of his coronavirus diagnosis this week.

And Conley was reluctant to provide more details on the president’s symptoms and the timeline of his illness, including the extent of his fever and the effects of the virus on the 74-year-old’s body.

He said Trump had not been on oxygen while he was with his team, but would not answer direct questions about Friday. Later, the Associated Press news agency reported via an unnamed source that the president was given supplemental oxygen while still at the White House, before being admitted to the hospital.

In contrast, when asked about reports that Trump had had difficulty breathing, Conley was unequivocal in saying that “he has not and never did”.

Equally confusing was Conley’s initial assertion that Trump was first diagnosed 72 hours prior, suggesting Trump tested positive on Wednesday, before he travelled to public campaign events in Minnesota and New Jersey. But a little later, the White House sought to clarify by saying Conley meant that it was now day three since the diagnosis, and that Trump was diagnosed on Thursday night.

Meanwhile, with the clock ticking on the 3 November presidential election, Trump’s admission to the hospital threw an already tumultuous re-election campaign into further disarray.

Several senior campaign officials and Republican figures, including campaign manager Bill Stepien, three US senators and former White House counsel Kellyanne Conway were also confirmed to have contracted Covid-19. Although the time, place and source of infections have not been confirmed, they attended an event increasingly regarded as a possible “super-spreader” – the announcement at the White House last Saturday evening of judge Amy Coney Barrett to be Trump’s latest nominee to the supreme court.