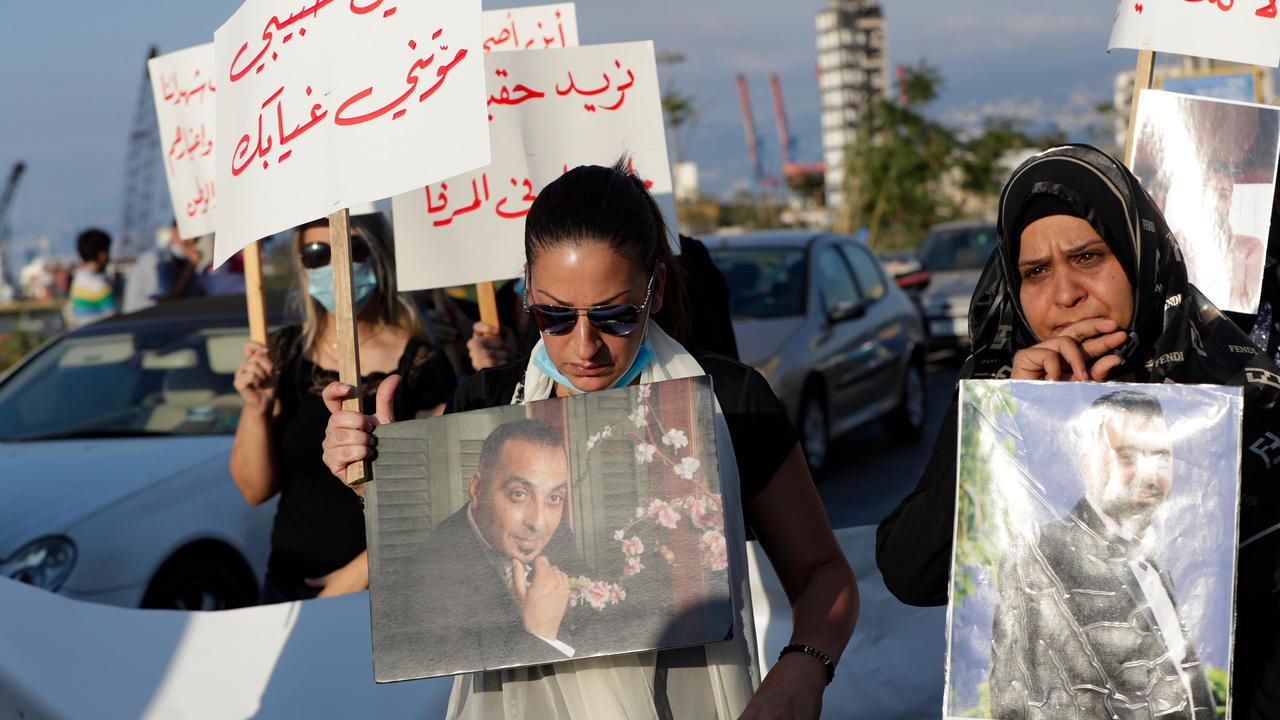 Relatives and friends of those who died in the blast gathered to mark two months since the disaster at Beirut port ANWAR AMRO AFP
Share:

Dozens of mourners gathered near what remains of Beirut’s port on Sunday to mark two months since a huge explosion widely blamed on Lebanon’s political class.

The August 4 blast ripped through swathes of the city, killing more than 190 people and wounding over 6,500.

Two months later, an investigation into the disaster has yet to make public its results, further stoking public anger in a country mired in economic crisis and battered by the novel coronavirus pandemic.

On Sunday just after 6:00 pm (1500 GMT), at the exact time of the explosion, balloons bearing the names of each of those who died were released into the sky from a street overlooking the port, an AFP photographer said.

A large sound system played a rendition of the national anthem and Lebanese songs.

Bereaved family members and activists, holding portraits of the victims and placards demanding justice, briefly blocked the road to traffic.

They voiced anger at the country’s political class, widely seen as directly responsible for the catastrophe through a mixture of corruption and incompetence.

“Is it too much to ask to know who committed this crime against humanity?” asked Samia, a mother of two, whose husband worked at the port and died in the explosion.

“Every day we die a hundred deaths,” she added. “My children have been deprived of the word ‘Baba’ for their entire lives.”

Salwa lost her uncle, who also worked at the port.

“He was like a father to me,” she said. “How could God forgive them, but may God forgive” those responsible, she added.

Another woman nearby interrupted her: “God have vengeance on them!”

“We demand that everyone who had a hand in this disaster is punished,” Salwa said.

The protest came after veteran cyclist Lance Armstrong led a bike ride to raise money to provide medical and food aid to those affected and repair damaged buildings.

The immediate cause of the blast was a huge stockpile of ammonium nitrate, a highly explosive fertiliser, stored without safeguards for over six years in a warehouse on the portside and ignited by a fire nearby.

Lebanese authorities have rejected calls for an international investigation into the incident, instead launching their own probe, which has so far resulted in around 25 arrests.

President Michel Aoun has acknowledged he was aware of the presence of the ammonium nitrate days before the blast, while other senior officials also knew of it and the dangers it posed to nearby residential neighbourhoods, according to anonymous officials.