France warns of Lebanon’s collapse if no government formed 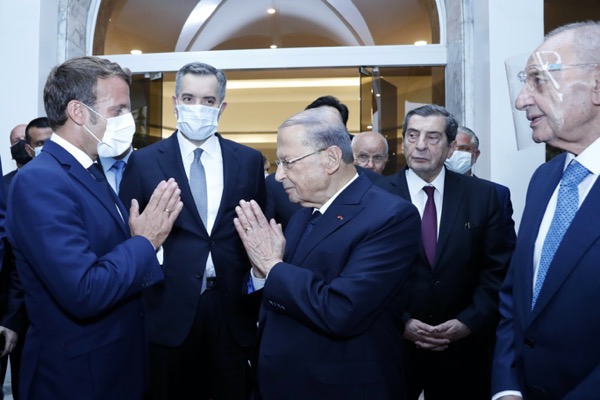 File photo: French President Emmanuel Macron ( L) is shown with top Lebanese leaders at the Baabda palace . PM designate Mustapha Adib ( 2nd from L wants to form a small cabinet of experts , but the so called Shiite duo of Hezbollah and its ally the Amal Movement are blocking the formation of the cabinet by insisting on naming their own ministers and on keeping the Finance ministry which they have held for the last 6 years .
Share:

PARIS – France’s foreign ministry on Tuesday warned Lebanon’s political forces that the country risked collapse if they did not form a government without delay.

“At this decisive moment in Lebanese history, Lebanese political forces are faced with a choice between recovery and collapse of the country. It is a heavy responsibility towards the Lebanese,” Foreign ministry spokeswoman Agnes von der Mühll told reporters in a daily briefing.

France is pressing Lebanese politicians to form a new government in a “reasonable timeframe” to lift the nation out of a deep crisis but has not fixed a new deadline after the last one in mid-September was missed, two French diplomatic sources said.

Lebanon’s Christian president, Michel Aoun, told fractious political leaders on Monday the country was heading “to hell” if a new cabinet was not formed swiftly to dig the nation out of its worst crisis since the 1975-1990 civil war.

“France regrets that Lebanese officials have not yet managed to keep the commitments made on September 1,” Von der Mühll said. “We call on them to reach an agreement without delay on the formation by (Prime Minister) Moustapha Adib of a government of mission, which will then have to implement the necessary reforms.”