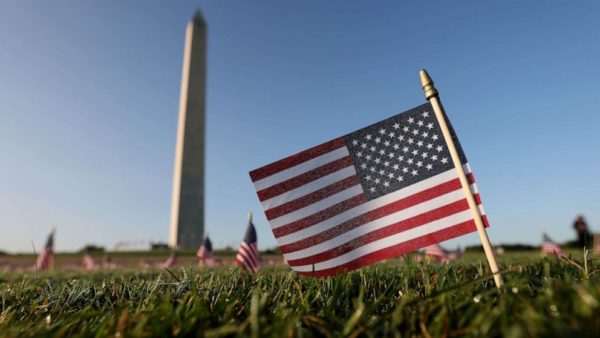 American flags at a COVID Memorial Project installation of 20,000 flags are shown on the National Mall as the United States crosses the 200,000 lives lost in the COVID-19 pandemic, Sept. 22, 2020, in Washington, DC.
Share:

He has bucked public health experts’ warnings as he fights for reelection.

President Donald Trump this week continued to minimize the severity of the coronavirus pandemic even as the United States surpassed the grim milestone of 200,000 reported deaths related to COVID-19.

Months after admitting to intentionally “playing it down” in order to avoid “panic,” Trump has bucked public health experts’ warnings about the virus at an increasing clip, repeating false and misleading statements about the pandemic as he fights for reelection

During a Tuesday interview with Fox television stations, Trump alternately called his response to the pandemic “incredible” and “tremendous.” The comment shortly before the toll passed 200,000 reported deaths, according to data collected by Johns Hopkins University. He has awarded himself a grade of “A+” for his handling of the pandemic but said he deserved a “D” for what he called “public relations.”

“We have in this country now, you know, close to 200,000 deaths,” Dr. Anthony Fauci, the top infectious disease expert and director of the National Institute of Allergy and Infectious Diseases, said in a Monday interview with “The Daily Show with Trevor Noah.” “We have 6 million-plus infections. You can’t look at that and say that’s terrific.”

Trump has in recent weeks repeatedly claimed that the United States is “rounding the corner” and “rounded the final turn.”

But there have been an average of 764 reported deaths and nearly 40,000 new reported cases each day the past week, according to the COVID Tracking Project. Public health experts warn the fall and winter — with seasonal influenza striking at the same time, and cold weather pushing people indoors — could worsen outbreaks across the country.

As the country this week hit 200,000 reported deaths, Trump made no special effort to mark the milestone, commenting Tuesday evening only when a reporter asked about it.

“I think it’s a shame,” Trump said, saying nothing more about those who’ve died before quickly turning to praise how he’s handled the pandemic, claiming the death toll would have been far worse if not for his administration’s efforts.

On Tuesday, a short walk away from the White House, a group called the “COVID Memorial Project” had placed 20,000 American flags in the grass alongside the Washington Monument, each representing 10 deaths.

“Things seem to be very good,” he said.

At a Monday campaign rally in Ohio, Trump emphasized the virus’s impact on elderly people with pre-existing conditions, suggesting other Americans were largely safe.

But that portrayal masks the rising cases among young and middle-aged adults across the country, who — while they experience severe symptoms and death at a lower rate — make up a significant percentage of the case count and spread the virus to others who are more vulnerable.

Trump added that “nobody young, below the age of 18, like nobody” is affected — directly contradicting his own comment in a March interview with veteran journalist Bob Woodward that the virus impacted “plenty of young people.”

“Take your hat off to the young, because they have a hell of an immune system,” Trump said Monday. “But, it affects virtually nobody. It’s an amazing thing.”

But evidence has been building that young people aren’t as impervious to coronavirus as initially thought.

Children are not immune to COVID-19 — and while scientists do not fully understand the potential long-term health problems kids could have — they have generally have had fewer severe symptoms in the short term. According to the Centers for Disease Control and Prevention, a recent analysis of 143,273 deaths revealed that 843, about 0.6%, occurred in people younger than 30, while 88, about 0.06%, occurred in people younger than 18.

While serious illness among young kids is rare, in the United States, at least 109 children have died from the coronavirus, and at least 587,948 have become infected, according to the American Academy of Pediatrics. They represent 10.3% of reported cases in areas of the U.S. that provide an age breakdown, according to the academy.

Young adults also are at risk for severe complications of COVID-19. A recent JAMA Internal Medicine study of roughly 3,200 people ages 18 to 34 showed that about 21% required intensive care and about 10% required ventilators. Ninety people, about 3%, died.

But scientists do not yet understand the degree to which children spread the disease to others, such as teachers, parents and grandparents, because there has been limited in-person schooling and limited contact tracing to track transmissions.

Over the last few weeks, Trump has more frequently claimed that a vaccine could be available to Americans next month and has even connected its timing to the Nov. 3 election. Last week, he said a vaccine could be distributed “sometime in October” — using ambiguous language that clashes with public health officials’ views.

“We essentially have it,” Trump said, even though ongoing safety trials have not concluded.

Experts have said it’s possible, though unlikely, that by the end of October there could be enough data from the trials to determine one of the vaccine candidate’s safety and efficacy, but even then it would only start being given to a limited number of people; most Americans would not get access to it until next year, top U.S. public health officials have said.

Trump’s desire to convince Americans the pandemic is nearing its conclusion — and that the average person has little to fear — has become even more extreme as Election Day approaches on Nov. 3.

“I wanted to always play it down,” Trump told Woodward in March. “I still like playing it down, because I don’t want to create a panic.”

The president’s campaign rallies, where thousands of supporters cram together with few masks and almost no credence to social-distancing recommendations, have become emblematic of his disregard for his own scientific advisers’ advice for the American public.

Over the last couple months, he has attempted to shift the conversation away from the pandemic to exaggerated caricatures of lawlessness in American cities and warnings about crime coming to the suburbs. A sudden vacancy on the Supreme Court has given him another opportunityto distract from the virus.