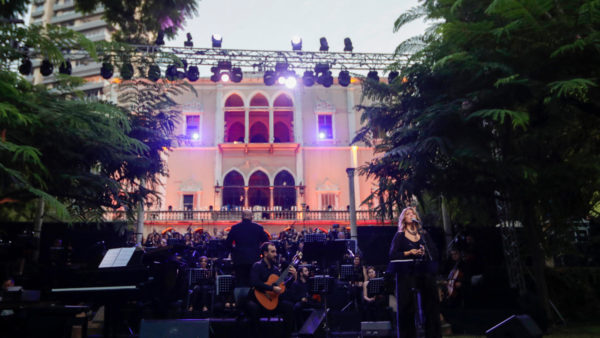 Lebanese singer Fadia Tomb El-Hage performed with a choir at a concert for the victims of August’s deadly Beirut blast in the gardens of the damaged 19th-century Sursock Palace in Lebanon’s capital ANWAR AMRO AFP
Share:

Lebanon on Sunday held a concert for the victims of last month’s deadly Beirut blast in the grounds of a 19th-century palace wrecked by the massive explosion.

The August 4 blast at the capital’s port killed more than 190 people, wounded thousands and destroyed or damaged buildings across swathes of the city.

“To be able to mourn, to take the time to really remember, it was important to have this moment of music,” artistic director Jean-Louis Mainguy said.

The event was held in the gardens of the Sursock Palace, whose windows, red-tiled roof, ceilings and furniture were ravaged in the blast.

The concert, which did not have an audience on site, but was instead broadcast on television and streamed online, kicked off with a rendition of “Li Beirut”, an ode to the city by famed Lebanese singer Fairouz.

Portraits of those killed in the blast were displayed in part of the heritage building’s grounds, with a candle burning under each.

The victims’ images and names were also broadcast on television, accompanied by the Muslim call to prayer and Christian chants of “Amen” performed by an orchestra and some 250 choir singers from around the country.

The concert included live performances as well as pre-recorded contributions, including from Lebanese singer-songwriter Tania Saleh.

In a recording, Lebanese-born French author Amin Maalouf offered “a prayer towards the sky so that Lebanon this time again can stand back up, rebuild its walls, and dress its wounds”.

Organisers asked Beirut residents to place a lit candle on their balconies or in their windows in commemoration of those killed.

The event was initially to be held at the port, but was moved after the air quality around the site was deemed too poor after fires there earlier this month.

On Saturday night, Lebanese-born British singer-songwriter Mika headlined another concert streamed online to fundraise for relief aid after the blast.