Lebanon’s complex power-sharing system is cause of all ills 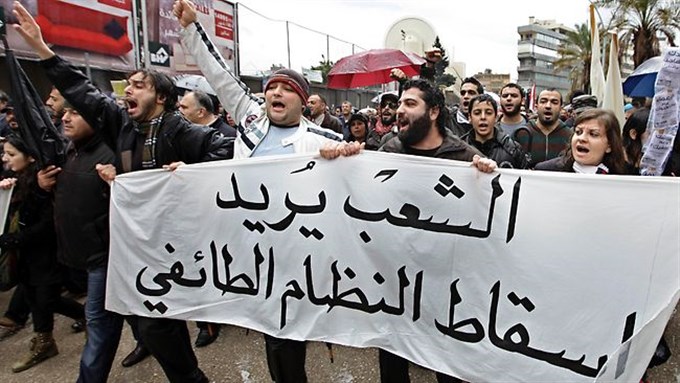 File photo: [ Protestors in Lebanon, \”The People Demand the Fall of the Sectarian Regime. Image from unknown archive]
Share:

Under pressure from its citizens and Western powers, the leaders of multi-confessional Lebanon have vowed to abandon a power-sharing system that is widely seen to plague political life.

The so-called confessional system divides power between Christian and Muslim communities in the Mediterranean country that is formally a parliamentary republic.

Under a decades-old arrangement, Lebanon’s president must always be a Maronite Christian, the prime minister a Sunni Muslim and the speaker of parliament a Shiite.

To its many critics, the system has paralysed the state and fuelled graft and inertia by cementing the power of sectarian former warlords and party barons who hail from a handful of powerful families.

The system was once praised as a pillar of coexistence. But after multiple political and economic crises, under-fire politicians have now joined activists in labelling it “the cause of all ills”.

The massive explosion at Beirut’s port on August 4 that killed at least 188 people, wounded thousands and devastated much of the capital has renewed calls for radical systemic change.

But entrenched vested interests make it unlikely that Lebanon will quickly say farewell to a system that has been the foundation of all political life for many turbulent decades.

Lebanon recognises 18 official religious sects, and its 128 parliamentary seats are divided equally between Muslims and Christians, an arrangement unique in the region.

The aim is for political representation to reflect the demographic balance, even though there has been no official census since 1932 — largely because the relative size of communities has changed considerably, to the detriment of some.

According to the latest unofficial estimates, Christians now account for about one third of Lebanon’s estimated population of 4.6 million, while Muslims make up most of the rest.

The power-sharing agreement between Christians and Muslims was first consecrated in the 1943 “National Pact” — an unwritten agreement reached after Lebanon gained independence from French mandate authorities.

It granted greater representation to Christians, before simmering tensions exploded in Lebanon’s civil war from 1975 to 1990.

Warring parties agreed to end hostilities after the Saudi-brokered Taif agreement established parity in parliament between Christians and Muslims, who had demanded greater representation.

The deal also shifted some powers of the Christian president to the prime minister and parliament.

According to the agreement, Lebanon’s confessional system was only meant to be provisional and temporary.

But in practise it has enshrined the control of former warlords who have swapped their military fatigues for suits and now share between them senior public sector positions on the basis of religious affiliation.

It also laid the foundation for a consensus-based system that requires agreement between the so-called troika of the president, prime minister and speaker over any major issue.

As a result, political differences regularly cause prolonged crises, with no mechanism in place to settle disputes.

Lebanese have criticised their power-sharing systems for almost as long as they have existed — but the cascading crises of recent months have amplified calls to scrap it.

An unprecedented cross-sectarian protest movement hit the streets from last October to demand a complete overhaul of a political system widely seen as broken.

The Beirut explosion of a huge pile of ammonium nitrate further fuelled the anger, because it was widely blamed on decades of negligence and corruption by the ruling elite.

French President Emanuel Macron, on a visit to disaster-hit Beirut, told Lebanese leaders they now faced the responsibility of forging “a revamped pact with the Lebanese people”.

Just before Macron returned on Monday for another visit, Lebanese leaders also adopted the call.

The head of the powerful Muslim Shiite group Hezbollah, Hassan Nasrallah, said his movement was “open” to the idea of a new political pact.

Despite such pledges, however, suspicion has been rife as ever that Lebanon’s political heavyweights were only paying lip service to reform ahead of Macron’s visit.