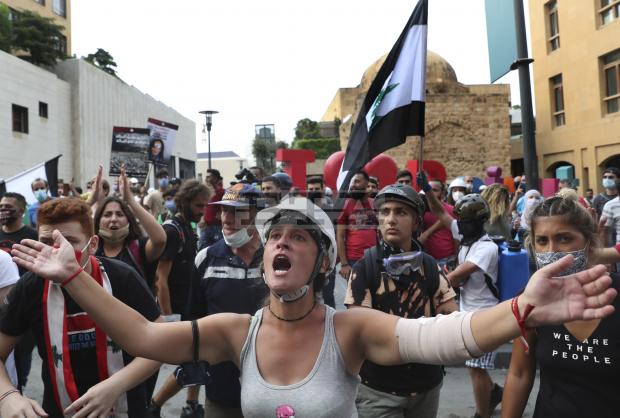 Anti-government protesters shout slogans during a protest near Parliament Square, in Beirut, Lebanon, Tuesday, Sept. 1, 2020. On a visit to Lebanon, French President Emmanuel Macron issued a stern warning to Lebanon’s political class Tuesday, urging them to commit to serious reforms within a few months or risk punitive action, including sanctions, if they fail to deliver. (AP Photo/Bilal Hussein)
Share:

Protesters in Beirut Tuesday called for a “new Lebanon” without its reviled leaders, urging visiting French President Emmanuel Macron not to cooperate with them.

Clashes erupted in the evening between angry demonstrators and security forces, who responded with tear gas, while earlier in the afternoon, people demonstrating in the capital called for urgent change.

Several held up black versions of the Lebanese flag in mourning for the victims of the massive explosion at Beirut’s port on August 4 that killed 190, injured thousands and ravaged large parts of the city.

A protest movement that erupted in October last year has been revived since the blast, Lebanon’s worst peace-time disaster that has sparked rage against official neglect and a political class accused of squandering away the country.

Demonstrators asked why Macron was meeting those very same leaders in his push for political change as the country marked 100 years since the former French mandate authorities proclaimed the creation of Greater Lebanon.

“He should come and listen to us, help us to realise our aspirations, not sit with the corrupt and criminals who killed their own people,” said Rima, a 46-year-old protester.

In the capital’s Martyrs Square, not far from the port, demonstrators one by one took to a stage to make their demands: a secular state, civil marriage, a productive economy.

Waving Lebanese flags and denouncing “corrupt” politicians, others nearby demanded the birth of a new secular state and the end of what they view as a broken political power-sharing system.

“The first century has been nothing but wars, foreign occupation, poverty, corruption, emigration, sectarian divisions, and now this explosion that killed and wounded thousands,” said 21-year-old port worker Omar.

“We urgently need to revamp this system,” he said, referring to a political arrangement that seeks to share power between Lebanon’s myriad religious communities but instead often leads to endless deadlock.

A loudspeaker blared patriotic songs as images of the French proclamation of Greater Lebanon on September 1, 1920, as well as of the port blast last month, played on a screen.

Zalfa, 70, said: “We want this second century to be one of secularism.”

Clashes erupted in the evening, sparking condemnation from activists and rights defenders over the authorities’ use of force.

“They have been met with large quantities of (French) teargas, beatings, and arrests. In one incident, more than 10 police beat/kicked a protester on the ground,” she said.

An AFP reporter saw a large group of security forces with batons move in on protesters. One demonstrator was helped away afterwards with blood splashed across her gas mask.

The Red Cross said one wounded person had to be transported to hospital.

The August 4 explosion came after months of Lebanon’s worst economic crisis in decades — which has seen poverty soar to more than half the population — and a coronavirus outbreak.

Speaking at a press conference following talks with the heads of Lebanon’s parliamentary blocs, Macron said Hezbollah “is probably in parliament because of intimidation but also because other forces have failed to run the country well.”

“But it has a popular base and that is the reality,” he added.

Nonetheless, “with Hezbollah there is a discussion that needs to be initiated,” with regards to disarmament, Macron added.

“This is exactly the discussion we had an hour ago (and) it should not be a taboo,” he said.

“This is exactly the discussion we