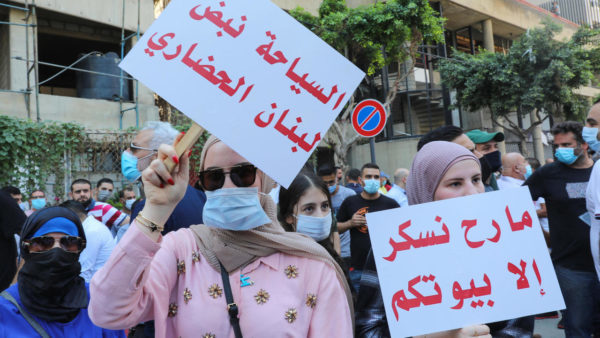 Supporters of tourism in Lebanon protest against the virus lockdown. ” “For us, the state vanished with the blast.”
Share:

A representative of Lebanon’s hospitality sector said on Tuesday that service and tourism businesses would defy a newly reinstated coronavirus lockdown that has compounded the blast-hit country’s economic woes.

“From tomorrow, we will open our doors,” said Tony Ramy, head of the syndicate of owners of restaurants, cafes, nightclubs and pastry shops.

“The arbitrary and demagogic decision to close down, whether partially or fully, does not concern us anymore,” he said in a televised statement from a Beirut street heavily affected by the August 4 explosion.

An AFP photographer said dozens of people gathered in support of the announcement, some holding signs that read “Tourism is the pulse of Lebanon” and “For us, the state vanished with the blast.”

The declaration, made on behalf of a wider tourism body also representing hotels and seaside resorts, came four days after authorities imposed a two-week coronavirus lockdown to stem a string of record daily infections.

Under the latest rules, malls, nightclubs, gyms, swimming pools, restaurants and coffee shops have been ordered to close.

Restaurants, coffee shops and pastry shops can deliver, but with a night-time curfew in place, are only allowed to operate between 6 am and 6 pm (0300 GMT to 1500 GMT).

Ramy blamed the government for the devastating explosion at Beirut’s port and the huge losses it has caused the tourism industry, which he estimated at around $1 billion, of which $315 million for restaurants alone.

He called on the sector to engage in “civil disobedience” against the state by severing commercial ties with the government and depriving it of tax money.

“We will not pay a single penny until we have a new state,” he said.

The coronavirus-related restrictions have dealt a fresh blow to a private sector already reeling from a series of crises.

Even before the explosion of a huge stockpile of ammonium nitrate at the port that killed more than 180 people, Lebanon was grappling with its worst economic downturn in decades.

Poverty rates have doubled to more than half of the population, according to UN estimates, and tens of thousands of people have lost their jobs or a large part of their income as a result of the crisis.

Authorities fear Lebanon’s fragile health sector would struggle to cope with a further spike in novel coronavirus cases, especially after some hospitals near the port were damaged or taken out of commission in the explosion.

Lebanon’s health minister warned this month that hospitals were reaching maximum capacity to treat coronavirus patients after the blast overwhelmed clinics and triggered a spike in COVID-19 cases.