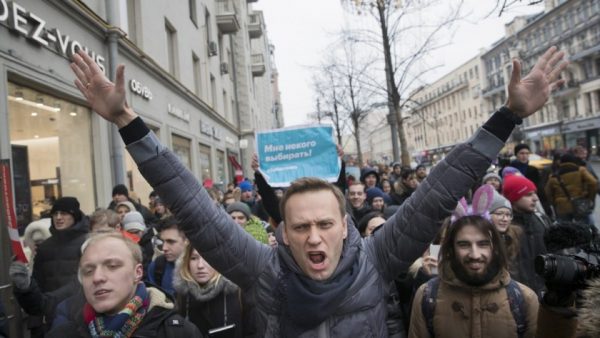 FILE PHOTO: Russian opposition leader Alexei Navalny was wrestled to the ground by police and dragged feet first into a patrol wagon during an anti government pProtest . President Putin , a former KGB chief reportedly does not tolerate any opposition Photo JAN 30, 2018: AP
Share:

Western countries are voicing their worries after the alleged poisoning of Alexei Navalny in Siberia. France said on Tuesday the Russian opposition leader, who was transferred to a hospital in Germany, had been the victim of a “criminal act”. Like Paris, the US also urged Moscow to carry out a swift investigation.

“France expresses its profound concern over this criminal act perpetrated against a major figure in Russian political life,” the country’s Foreign ministry said in a statement.

It called on Russia to “carry out a swift and transparent investigation which will enable the circumstances in which this act was committed to be established … Those responsible for this act must be identified and brought to justice.”

Hours later, the US ambassador to Moscow John Sullivan also urged Russian authorities to launch an “immediate, comprehensive, and transparent investigation” that holds the parties behind this act responsible, his spokeswoman wrote on Twitter.

The 44-year-old Navalny, who is one of the fiercest critics of President Vladimir Putin, is being treated at Berlin’s Charité hospital after falling ill on a flight in Siberia last Thursday.

Navalny’s supporters claim he was poisoned by something in his cup of tea at a Siberian airport before taking a flight to Moscow, and point the finger at Putin.

The German clinic said Monday that clinical tests “indicate poisoning with a substance from the group of cholinesterase inhibitors”, substances that are used in nerve agents as well as some medicines and insecticides.

But Kremlin spokesman Dmitry Peskov said that Russian medics had diagnosed Navalny’s condition in a similar way to German doctors but did not know what caused it.

France under President Emmanuel Macron has pursued a policy of dialogue with Russia, even on issues where they disagree, a position that has sometimes put him at odds with EU allies.