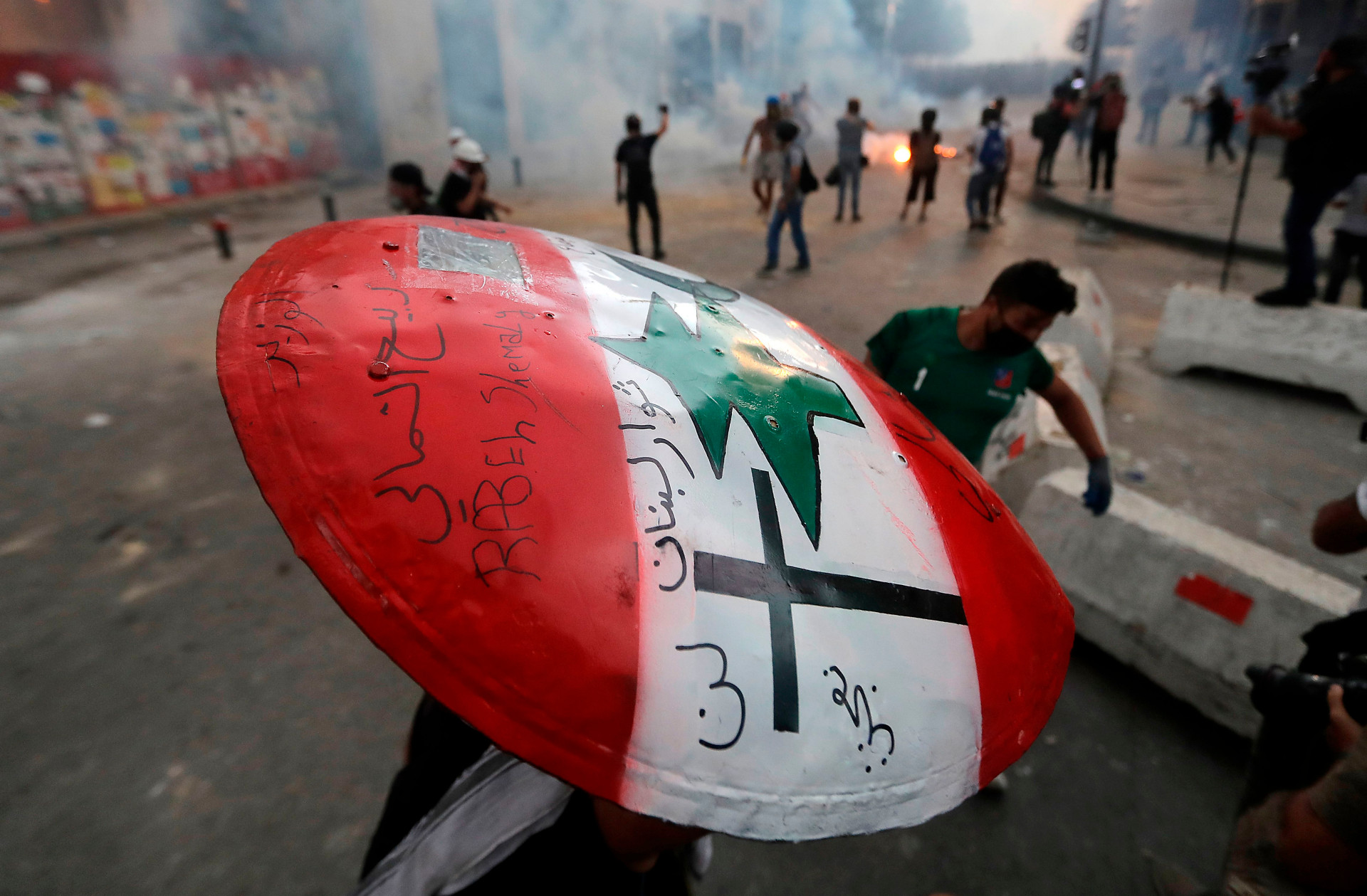 Lebanese protesters clash with security forces in the vicinity of the parliament in central Beirut on August 10, 2020 following a huge chemical explosion that devastated large parts of the Lebanese capital. (Photo by JOSEPH EID / AFP) (Photo by JOSEPH EID/AFP via Getty Images)
Share:

Sworn in in January to usher in reforms and save Lebanon, Prime Minister Hassan Diab resigned Monday as thousands of protesters returned to the streets to express their anger at last week’s port explosion. The blast killed some 200 people and injured 6,000 more and was clearly due at least in part to the negligence of the state and its agencies. The public is unlikely to be appeased by the resignation of Diab’s government, which was widely deemed to be a puppet whose strings were controlled by Hezbollah and its allies. The rest of the country’s political elites, the sectarian warlords of the civil war era and their descendents, clinging to positions of privilege, are still busy looking for scapegoats.

Ordinary Lebanese, meanwhile, say that if there ever was a doubt about Lebanon being a failed state, there isn’t anymore. The anti-government protests that engulfed the country last October, only to mostly die down during the pandemic lockdown, are now back. Tens of thousands of people returned downtown over the weekend near a large wooden frame with nooses hanging down. The symbolism was clear: The crowd wanted not just to change the government but to get rid of the entire political class.

The protesters blamed Lebanon’s sectarian system of government for breeding corruption and inefficiency that manifested in the Beirut port blast. Hundreds of thousands of homes were damaged as a warehouse stored with ammonium nitrate, a humble fertilizer that doubles as a lethal explosive used to make bombs, caught fire on Aug. 4, causing massive twin blasts with a magnitude comparable to that of a small nuclear explosion. It razed nearby buildings, flinging cars in the air and blasting out apartment doors and windows and smashing them against walls and anyone who came between. And behind this chaos were the leaders who ignored warnings for years about the explosive material.

These leaders, Lebanese now demand, must hang. “Alekoo al-machanek,” or hang the nooses, resonated at the protests, amid volleys of tear gas fired by security forces. Later in the evening on Saturday, police were initially absent as the protesters ransacked a few government offices, but they eventually cracked down. Several activists and protesters were seen live on television, and on social media, being beaten by men in uniform. Red Cross ambulances struggled in the traffic jams to cater to the wounded, and at a different spot, supporters of Hezbollah expressed loyalty to the group and chanted they were ready to do whatever their leader Hassan Nasrallah asked for.

But most protesters were undeterred. Hundreds kept flowing to the protest site even as others were being violently vacated. “They cannot push us back in our homes, because we don’t have a home. Our homes have been damaged,” said Ghassan, an anti-government protester, holding an L-shaped wooden stick with a noose dangling at the top. Ali Ezzeddine had traveled from Tyre, in the Shiite-dominated and Hezbollah-controlled south of Lebanon. “We want them all to hang, but first among them should be Hezbollah,” he said. “They are all shameless and will jail low-ranking officials to protect themselves. But we don’t want that—we want an international investigation.” It had previously been unusual for Lebanese to be willing to place such vehement remarks on the record.

Lebanese President Michel Aoun has ruled out an international investigation and alluded that a foreign hand may have been involved in causing the spark that led to the explosion. “There is a possibility of external interference through a rocket or bomb or other act,” he told the local press. Hezbollah’s Nasrallah has said the investigation must be conducted by the military and complained about being wrongfully accused of using the port as a weapons depot. “We have nothing in the port,” he said in a televised address. “Not an arms depot nor a missile depot nor missiles nor rifles nor bombs nor bullets nor ammonium nitrate.”

But Lebanese are furious and are asking why 2,750 metric tons of ammonium nitrate—once described by officials as a “floating bomb” that would blow up the whole city unless safely removed—was ever stored in a warehouse near residential areas. Why was it not disposed of or reexported despite several warnings that it presented an imminent danger?

A growing number of Lebanese are targeting their anger at Hezbollah, which is believed to have a dominant say on matters relating to the port. Some suspect that the group may have been intent on saving the chemicals for future use; ammonium nitrate has previously been the militia’s preferred chemical for making bombs.

There are also unanswered questions relating to how the explosives ended up at Beirut’s port in the first place. In 2013, a Russian named Igor Grechushkin was paid at least a million dollars upfront to transport the ammonium nitrate from Georgia to Mozambique, according to the captain of the ship, Boris Prokoshev. Grechushkin asked the crew to make an unscheduled stop at Beirut to pick up some machinery, but the Lebanese port authorities were incensed because the crew would not pay the port fee and held four of the crew under detention while impounding the ship. The captain told the Russian press that in his 11 months in detention in Lebanon no one from Mozambique seemed to have inquired about or shown interest in retrieving their expensive cargo.

Marianna Belenkaya, a Russian journalist who has been following the case, said she found that suspicious. “It is very hard to put this story together, but why did Mozambique not get in touch with Lebanon’s government to retrieve its ammonium nitrate?” she told me over the phone from Moscow. “Unless it did, and the Lebanese government is hiding that information. If you pay a million dollars for something, you want it back.” The question is whether the cargo was ever intended to go to Mozambique in the first place or whether that was only a cover story for a delivery intended all along for Lebanon.

Negligence and corruption have caused a devastating disaster.

Amid such ambiguities, and the obvious negligence of the Lebanese state and its agencies, Human Rights Watch has argued that the blasts must be investigated by an outside international panel. Aya Majzoub, the Lebanon researcher at Human Rights Watch, told Foreign Policy that the organization has long observed corrupt connections between the political class and the judiciary, with the latter often facing accusations of not abiding by the law and giving in to political pressure. A top diplomatic source told Foreign Policy that the United States has offered the FBI’s assistance to the Lebanese government to investigate the blasts and that the message has been passed on to Aoun. Lebanon’s government still seems hesitant, however, to cooperate with any investigation by the U.N. secretary-general’s office or even a special rapporteur.

Meanwhile, ordinary Lebanese fear that the political elite will pin the blame on easily scapegoated officials in hopes of quickly moving on. Badri Daher, the director-general of Lebanese Customs, who leaked a paper trail to local media establishing that the judiciary had been informed of the dangers presented by the stockpile of ammonium nitrate, has already been arrested, as have other port officials. The question remains whether that will mark only the beginning of a far wider, and higher-reaching, wave of arrests.

Anchal Vohra is a freelance correspondent for Al Jazeera and regularly writes for Foreign Policy. She is a  Beirut-based journalist covering the Middle East and South Asia. Twitter: @anchalvohra