Aoun was informed about the dangerous stockpile 15 days before blast 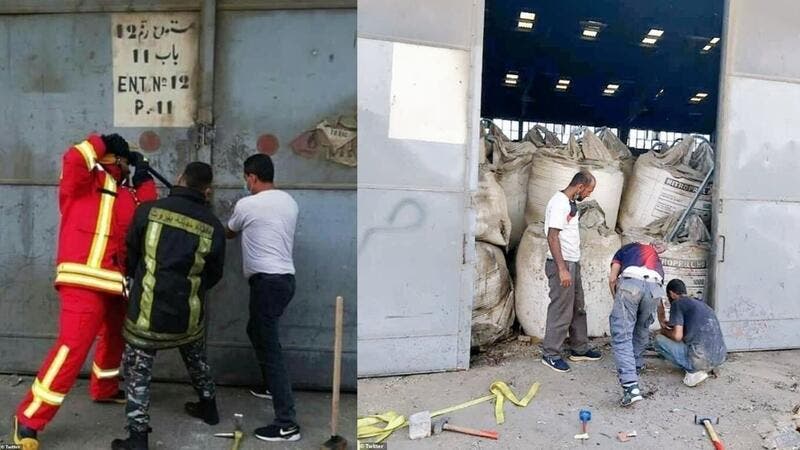 This tragic photo is showing the final moments when firefighters were sent to tackle a blaze at Warehouse 12 in Beirut’s port before the stockpile of 2,750 tons of ammonium nitrate stored inside exploded with the force of a small nuke. The photographer is known to have died in the explosion while the fire crew are missing, believed to be dead.(Twitter)
Share:

Lebanese president Michel Aoun was first informed on July 20 about a dangerous stockpile of ammonium nitrate in the port of Beirut – 15 days before a huge blast killed 154 people and injured another 5,000.

Speaking to reporters on Friday, president Aoun said he immediately ordered military and security agencies to do “what was needed”, but suggested his responsibility ended there, saying he had no authority over the port and that previous governments had been told about the explosive chemicals.

“It is possible that it (the explosion) was caused by negligence or by external action, with a missile or a bomb,” he added.

According to newly surfaced documents cited by news agency AP, Lebanon’s customs, military, security agencies and judiciary warned at least 10 times over the past six years about a massive stockpile of dangerous goods being kept with almost no safeguard in the heart of the Lebanese capital.

A lawyers’ report from 2015 referred to the “dangerous” nature of the cargo and said it was being kept in the port “awaiting auction and/or proper disposal”. Yet it remained there until Tuesday’s disastrous consequences unfolded.

So far, at least 16 port employees have been detained and others questioned.

Many want to know why such material was kept for so long, in such an unsafe manner, so close to heavily populated areas.

Lebanon’s Prime Minister Hassan Diab has launched an investigation, saying he will seek maximum punishment for those responsible. But many are directing their anger far beyond port officials.

“This is negligence from the ruling elite. An atomic bomb was there for years, and not a single leader or ruler did anything about it,” one male Beirut resident told Euronews.

Dozens remain missing following the explosion, while around 300,000 people, more than 12% of Beirut’s population, were unable to return to their homes.

The head of state’s comments came as protesters clashed with police on Thursday night at an anti-government rally in the Lebanese capital in the wake of Tuesday’s blast.

Demonstrators pelted officers with stones, voicing their anger against the political elite.

Many in the city feel government negligence and corruption are to blame for the deadly explosion.

Meanwhile, US President Donald Trump said a conference call has been scheduled for Sunday with French president Emmanuel Macron and other leaders with the aim to raise funds for Lebanon.

“Everyone wants to help”, he tweeted.

He added that three aircraft loaded with medical supplies, food, water and doctors are on their way from the US.

Emmanuel Macron arrived in Lebanon on Thursday where he promised international aid for the country after a deadly blast tore through the capital three days ago, killing at least 163 people. But he said the government should crackdown on corruption and implement economic reforms.

Macron was walking through Beirut’s damaged streets as crowds jostled around him chanting for the government to “fall” and asking for international aid.

He promised locals a “new political pact”, and would give the Lebanese government until September 1 to impose it.

During a press conference on Thursday evening, he said French aid to Lebanon will be channelled “directly towards NGOs” and promised to organise an aid conference with the EU in the coming days.

But he warned there would be “no blank cheque to a system that doesn’t have the confidence of the people.”

Macron also called for an independent investigation into the causes of the explosion.

Ahmed Aboul Gheit, the secretary-general of the 22-member Arab League, visited Beirut on Saturday saying he would take part to the donors’ conference call on Sunday.